Sunderland have unveiled their new home kit, to be worn in the 2013-14 season.

Sunderland have unveiled their new home kit for the 2013-14 season on the club's official website.

Obviously it's red and white, and with not many ways you can particularly mess that up the shirt comes across as a little standard, but the designers at Adidas seem to have done a fairly decent job on it given the templates available.

Initial reaction here at Roker Report is that it looks as though it harkens back to the early 1980's Sunderland strips, which were slightly more white than red at first glance. Sort of 1983-84 Cowies era.

It's also seemingly got a bit of a European or continental feel about it, which is difficult to explain other than it looks a little like someone else's kit, but overall it's a nice looking kit we think.

The kit features obviously, vertical red and white stripes with white Adidas piping on the shoulders. The strip also has a semi-collar with black trim and also black trim on the sleeves. The shorts are black with red trim, as are the socks. 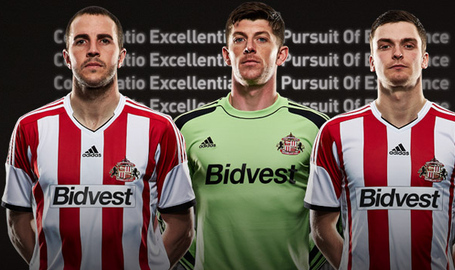 The only thing I'm a little concerned about is the Bidvest logo. I simply can't decide if it's quite good that it goes back to a bygone era with the unnecessary white box behind it, or, well, it's unnecessary in this day and age.

The kit will is available to preorder on the club's web store HERE.

What do you think of the new kit? Vote in the poll below!