Best Player Of The Past Ten Years: Quarter Final Review

This poll is now very much in the business end as the curtain has drawn on the Quarter Final round, and we enter the semi-final and the final itself next week.

Share All sharing options for: Best Player Of The Past Ten Years: Quarter Final Review

The first Quarter Final was far from an inspiring one, but such is the luck of the draw as Bolo Zenden and John Mensah met, with one progressing to the semi-final.

It's also at this point when people began to murmur some discontent at at lack of seeding. While I can fully see their point, it also takes away some magic. Wouldn't you like to see an underdog prevail from time to time, or do you enjoy constant clashes of the big-boys? I suppose we might as well just start the FA Cup at the semi-finals with Manchester's United and City, Liverpool and Chelsea too? No, I didn't think so.

Anyway, rant out the way Zenden took on Mensah and it wa the Dutchman who came through in fairly narrow circumstances, 59% to 41%.

In the upcoming Semi Final Zenden will be taking on Steven Fletcher, who managed to overcome Mart Poom. This matchup I felt could have genuinely gone ither way but you the public were much more decisive. Despite only two-thirds of a season in a Sunderland shirt, it was enough to give the adopted Scotsman a winning percentage of a whopping 64% to Poom's paltry 36%.

The third Quarter Final was something of a doozy. I believe that's what they call it anyway. A Ding-Dong battle maybe. Anyway, crowd-favourites Steed Malbranque and Julio Arca met.

At one point I'm told the lovely little Argentinean was well ahead n the voting, with some saying it was as much as 70/30. When I got round ot casting my own vote in favour of Julio it was a narrower 55/45. By the time all was said and done though we have to give some credit to Steed Malbranque for battling back and overcoming the odds to dump Julio out of the competition with an ever so slim 52% to 48% victory in a poll over over 1100 Sunderland fans.

Steed moves forward to take on Simon Mignolet in the Semi Final after the Belgian absolutely stormed it over Danny Rose in his Quarter Final. The now Liverpool player took a comprehensive 87% to 13% victory over Rose, who may have been hampered with the recent announcement that he won't be leaving Spurs this summer. At least that's the only reason I can think of for such low score, even if the result is as expected.

So your Semi Final lineup is below; 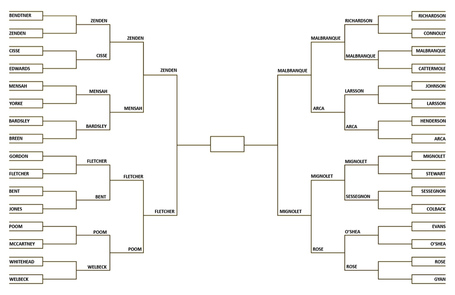 The Semi's and Final will be on the site next week for your votes.