Best Player Of The Past Ten Years: Round Two Review

A fiercely contested Round Two of our best player of the last ten years poll is done. So here's how it went, and what lies ahead in the quarter finals!

Share All sharing options for: Best Player Of The Past Ten Years: Round Two Review

Round two was always going to be a bit more interesting that the first. Certainly not as many one-sided clashes (on paper) anyway.

The first matchup between Bolo Zenden and Djibril Cisse seemed to be just that, however when it came to the crunch, you the public poured scorn on Cisse's contributions during his brief flings with Sunderland and allowed the dancing Dutchman to walk off with a pretty routine 69-31% victory.

Zenden will face John Mensah in the first Quarter Final later this week after the fragile Ghanaian had enough in the tank to convincingly beat Phil Bardsley into submission, with a 68-32% victory.

The next matchup seemed to me to be the toughest of the round with Steven Fletcher taking on Darren Bent. Fletcher still a bit new but well liked, Bent did much more but left in awful circumstances. That seemed to be the clincher as Fletcher waltzed into the next round after a rollicking 73-27% victory.

The first major shock of the round sees the adopted Scotsman go through to face Mart Poom in the second Quarter Final after he just about edged out Dean Whitehead.

The voting for this one was very tight all day, with the lead passing between the pair on numerous occasions, A winning margin of just 4% saw Poom take a 52-48% victory.

The third Quarter Final lines up with Steed Malbranque as a participant too. The fine midfielder put in yet another masterclass to overcome Mag-busting Kieran Richardson by a winning margin of 63-37%. Perhaps slightly closer than one would have expected, but never the less the "right" result.

Steed will have a tough task in the next round though has he comes up against Julio Arca. Two handsome men went to battle for the vote, however it was Julio who came out on top. As if that was ever in doubt!

There was something of a minor shock in the penultimate tie of the round when Simon Mignolet overcame the odds to take a narrow win over Stephane Sessegnon. God may well have mixed Messi & Pele but the combination is no match for our (former) Belgian 'keeper.

And finally in the last tie of the round two top notch defenders met in the form of Danny Rose and John O'Shea. Teammates last season of course, but they've now gone their separate ways both in life and in our tournament. Danny Rose took the narrowest of victories to set-up a tie with Simon Mignolet in the quarter finals.

So here's how the bracket is taking shape: 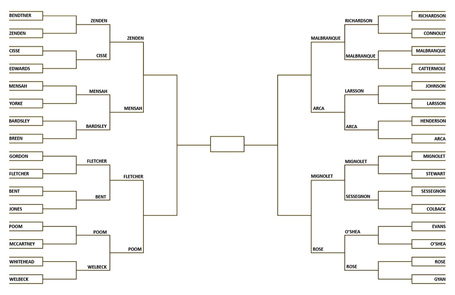 Or if you can't be arsed with any of that chaff then here's the Quarter Final draw;

Be sure to keep checking the site, and keep voting for your favourites.