Best Player Of The Past Ten Years: Round One Review

Round one of our Best Player Of The Past Ten Years poll is in the books, and whilst it went in the main according to what people expected, there's some juicy ties lined up for round two...

Share All sharing options for: Best Player Of The Past Ten Years: Round One Review

Well it's been a bit of a slog, and there has been a couple of snipes at it but round one of our little summer tournament of sorts is in the books and we can take a days break before ploughing on with the second round, which has some very interesting looking clashes on the cards.

Things kicked off with a routine victory for Bolo Zenden over Nicklas Bendtner, although that wasn't without controversy as several chose to argue on Twitter about it, claiming Bendtner's actual contribution in being our top scorer, scoring against the Mags and some all round decent play (when he could be bothered) were being clouded by fond memories from Sunderland fans of Zenden's Dad Dancing and that spectacular hit against Tottenham Hotspur.

However it was the Dutchman who came away the winner with over 70% of the vote from you the public to set up a second round tie with Djibril Cisse.

Cisse had his own head to head with Carlos Edwards, and while Edwards' instrumental play during our promotion push was heralded, and in particular that goal against Burnley, it wasn't enough to overcome the eccentricity of Cisse. In one of the tightest votes of the round, Cisse took the victory with 55% of the vote.

Next up were two matchups which didn't exactly set hearts racing, although much like an FA Cup game between two League One sides, it had to be done.

First of all we saw John Mensah tackle Dwight Yorke. Ok, so it's not that monumental a battle, but Dwight's one decent season wasn't enough to overcome Mensah's rare appearances for us saw him outmuscle Yorke by a considerable margin, 70% to 30%.

Phil Bardsley somehow did something right. He proved to be slightly more popular than Gary Breen in a basement battle of two of the last men who made it onto the 32-man list. Bardsley only took the crown 60-40, which speaks volumes at both ends of the spectrum about their respective skills.

Then a decent match, a goalscorer against a goal-getter as Craig Gordon took on Steven Fletcher for our vote. In my own predictions for this tournament, it didn't quite go according to how I imagined with Fletcher scooping 67% of the vote. I thought Gordon would be remembered slightly more fondly and perhaps with a bit of sympathy but despite only being here a season, and injured for a large part of it, the adopted Scotsman beat the genuine one.

Fletcher will go head to head in the next round with Darren Bent. A man whom is obviously a figure of hate, however you can't knock his goalscoring prowess for us, which is ultimately what earned him a 68-32 win over Kenwyne Jones. Poor Ken, I always quite liked him.

No time for sentimentality though as one of three goalkeepers in the draw, Mart Poom, took on George McCartney. It was going to be a challenge to see if people remembered the good McCartney from his first spell, or the poor one from his second. People sided with the latter, and the giant goalscoring 'keeper came away with a comprehensive victory.

Poom will find himself up against Dean Whitehead in the next round after he overcame a fairly robust challenge from Danny Welbeck, 60-40. The former skipper just about deserved that one for my money, having given us some good service despite his limitations.

A goal against Newcastle is a good way to write yourself into Sunderland folklore, and it proved to be more than enough for Kieran Richardson to overcome the challenge of David Connolly. In what was one of the biggest winning margins of our entire competition, Richardson smashed Connolly 90-10. Unbelievable, Jeff.

Steed Malbranque ran Richardson close in the walkover stakes though when he took on Lee Cattermole. Beauty triumphed over the beast 87-13 for what should be an interesting clash in the next round.

Adam Johnson and Seb Larsson are two who still currently play for us. The only clash of it's sort in the competition, and there proved to be an exception to the rule of players scoring against the Mags as Johnson was fairly comprehensively downed by the sexy Swede 65-35.

In what promises to be a battle of the hearthrobs, he'll take on Julio Arca in the next round as he saw off a tame challenge from Jordan Henderson to win 73-27. The public making a very wise choice on that particular one, so give yourself a pat on the back.

Evidently people like goalkeepers as Simon Mignolet made it through to the next round despite just recently breaking our little hearts and joining Liverpool. The challenge of Marcus Stewart proved to be almost non-existent with an 80-20 win for the big Belgian.

Stephane Sessegnon makes it through to the next round too, but perhaps not as comfortably as he would have liked against Jack Colback with a 65-35 victory. I happen to agree with the outcome, but I didn't think it would end up quite as close. As Luke Bowley pointed out;

I like Colback a lot, but if you voted for him over Sessegnon then your life must be devoid of any joy.

In the penultimate fixture two defenders with Manchester United connections met in the form of Jonny Evans and John O'Shea. In a very close encounter, O'Shea just sneaked it over Evans. We thought this would be close and it proved to be so.

Asamoah Gyan and Danny Rose met in our final encounter of the round. Both well loved during their time at Sunderland, however it was Rose who walked away with a monumental victory of 90-10. Danny, if you're reading, this is how much you're loved. Come back!

So that's the first round, and here's how the bracket is looking headed into the second round: 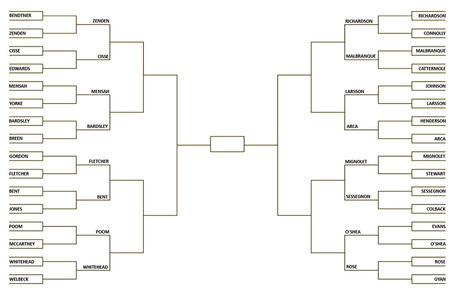 CLICK HERE to view a larger version, or just look at the mouth-watering fixtures below:

I hope you're enjoying it, and continue to vote because it's all on you to decide who wins. We can only put forward the cases for each player but the rest is up to you!