Sunderland are wasting no time in the transfer market with a new and relatively obscure name seemingly linked every day. Today is no different...

Share All sharing options for: Report: South American Winger 'To Meet' With Sunderland

Journalists based in Rosario, the home of Argentinian club Newell's Old Boys where Scocco is currently on loan, are reporting that the player's representatives are due to meet with Sunderland on Wednesday. 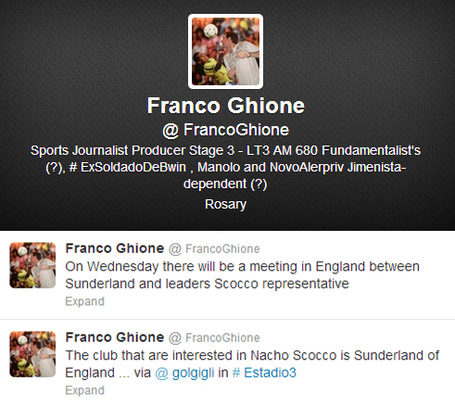 It is difficult to really know what to believe at this time of year but this one may have some legs. As a right-footer who likes to play on the left, Scocco fits in with Paolo Di Canio's liking for inverted wingers.

Although capped at international level, he also possesses an Italian passport, so there would be no difficulty in getting the player to England.

Whether or not the deal is a goer on the financial front is another matter. Al Ain paid just €3m to take Scocco to the UAE and he has made it clear he does not with to stay at the club, so the fee itself is unlikely to be a problem. As we found out ourselves with Asamoah Gyan, however, wages tend to be the draw and he would need to take a substantial pay-cut if he is to make any move to the north east.

Another name in the hat and one we'll naturally follow for any developments. In the meantime, here is a video of the player that we include simply because it is rather good.