We decided to launch a little project this summer in that we allow you to decide the greatest Sunderland player of the last ten years. How the hell does this work? Well here we are to explain...

Share All sharing options for: Sunderland's Greatest Player Of The Last Ten Years: You Decide!

Right then, the pressure is on you the great Roker Report-reading public to decide who is the greatest Sunderland player of the last ten years.

Why did we choose the last ten years? Well initially it was to be "since the turn of the century" but factoring in a likely runaway victory for Kevin Phillips, Niall Quinn or Tommy Sorensen we chanced it to the last ten years -- so since the start of the 2003/04 season.

And for the pedants we know SuperKev was with us for a short while at the start of that season, but we're looking at what they did for us from that season onwards. He didn't contribute.

So, behind the scenes here we chose 32 players from the last ten years to go into the tournament. This was a bit of a challenge trying to find that many worthy candidates since 2003, and you can probably tell where the pickings got a little slim towards the 25-32 mark of compiling our entrants.

Here's how it's going to work: 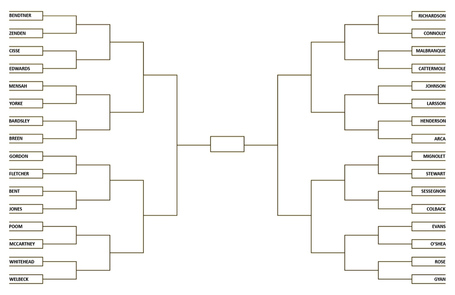 CLICK HERE to view a larger version of the bracket.

So that's how it's going to work, and the first matchup starts later on today... Be sure to get voting.