Sunderland have finally unveiled the first of two new kits this summer, with an interesting yellow number to be worn occasionally away from home.

Share All sharing options for: Sunderland Unveil New 2013-14 Away Kit

Sunderland have gone for a break from the norm for this years away strip, as has been revealed today on the club's official website.

The shirt, which is predominantly yellow in colour harkens back to previous yellow and yellow-ish efforts worn in 1997-98, in that infamous play-off final defeat at Wembley, as well as in our 1995-96 promotion season which featured teal flashes.

Although there's no such teal flashes in this shirt. As modelled by John O'Shea and Adam Johnson here you can see that the flashes on the yellow and dark navy shirt come with rather odd orange flashes on the under-arm panels. 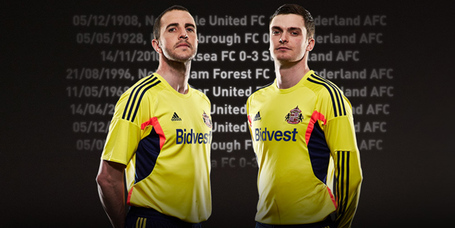 The shorts are pretty standard, a simple reverse of the shirt and the socks also a dark with a yellow trim.

The immediate reaction to the shirt has been mixed among Sunderland fans. Some find it a refreshing take on our away kits citing at least it's not just plain white or blue, whilst others consider it to be "ugly" and a "bit like Watford FC's kits would look like should they be manufactured by Adidas" (they're currently Puma), although the under-arm flashes would have to be more of a darker red to be more Hornet-like.

The kit is from a template, as a club our size would expect to get from a large shirt manufacturer and follows the same template as recent releases for Hull City's new away kit, as well as Bolton Wanderers and Bristol City's home kits.

Either way, the players should have no trouble picking each other out on the pitch!

What do you think of the kit? Vote in our poll, and if you like it proper loads you can pre-order yours today from the official SAFC store - HERE.