As if writing about tactics when following Sunderland wasn't difficult enough, Monday's visit of Stoke stretched capabilities to the limits. Surviving through several heart attacks and one of the most nervy games in recent memory, here's our analytical look at a crucial home point... 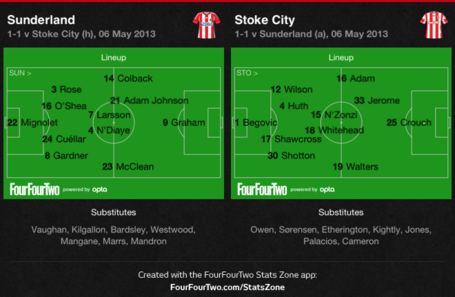 Shorn of Stephane Sessegnon, Steven Fletcher and Lee Cattermole, Paolo Di Canio was fairly hamstrung in the options available to him when selecting his starting lineup. In truth, he probably picked the right personnel - but where he placed them was somewhat baffling.

The decision to place Jack Colback on the left-wing was never likely to work out too well. Colback, versatile though he may be, simply isn't a winger. Despite the lack of balance it would have meant, it would have been far more understandable to see the youngster line up at right-back, as he had against Everton. Of course, following Craig Gardner's red card, that is exactly where he went.

James McClean on the right, too, was odd, but in some ways worth a try. Adam Johnson was Sunderland's best player for the 34 minutes in which he played behind Danny Graham, but Gardner's red saw the home side revert to a 4-4-1, with Johnson going to the right and McClean reverting to his familiar left side. In the middle, Alfred N'Diaye started deep but was soon moved higher upfield, as the onus was placed on him to provide a shuttling midfielder, with Seb Larsson instructed to sit deeper and spray passes wide.

As for the visitors, their approach was predictably basic - and effective, in the first half at least. Tony Pulis employed two deep-lying central midfielders and told them to sit in front of the defence, as his side looked to keep it tight at the back and nick a goal from a set-piece. Inevitably, they did so after just nine minutes.

For the opening twenty minutes, Sunderland were nothing short of woeful. Of 71 attempted passes, 28 went awry. The futility of employing Colback on the left wing was evident in how, across nearly a quarter of the game, he received the ball just four times - and not once in the opposing half.

Despite finding some good space in between Stephen N'Zonzi and Dean Whitehead, Adam Johnson's impressive touch and awareness counted for nought. There was simply nothing around him to hit. Colback was too deep, McClean moved inside too readily and compressed the space, while Danny Graham - though trying to effect good movement ahead - was crowded out all too easily.

It was a sobering reflection of the brittle confidence of this squad. The red and whites started nervily and, when Jonathan Walters stung home an early goal, their heads dropped visibly. Against the tallest side in the league, Sunderland took to hoofing long balls forward to Graham. Most of the time he didn't even have a chance to get to the ball to challenge for it, but, when he did, he was unsurprisingly outfought. The home side continued this throughout the game - with ten men, they were often required to clear their lines in such a way - but it was in the game's opening stages that the "tactic" was most frustrating. 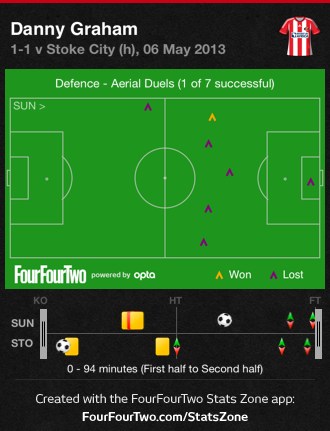 Ironically, Craig Gardner's red card actually seemed to help Sunderland. It was a shocking, idiotic tackle from the midfielder, and on another day would likely have cost his side any hope of salvaging something from the game. Yet, perhaps down to the motivation offered by Di Canio on the sidelines, it invigorated the Black Cats.

Before his dismissal, they'd been lethargic and seemingly terrified of going forward. After going down to ten men, they actually started to keep the ball relatively well, something that was helped by Stoke's unwillingness to seek to take advantage of their extra man.

Indeed, the away side's refusal to change their original plan was somewhat galling. Often, their only real out ball into midfield was to Charlie Adam on the left, who would then look to play a "Hollywood" pass up to either Peter Crouch or Cameron Jerome. Sunderland's central defence coped well, and Adam lost possession of the ball no fewer than 25 times. Carlos Cuellar and John O'Shea actually had a small amount of clearances to make given the opposition and the numerical deficit, but what they had to do, they did well. 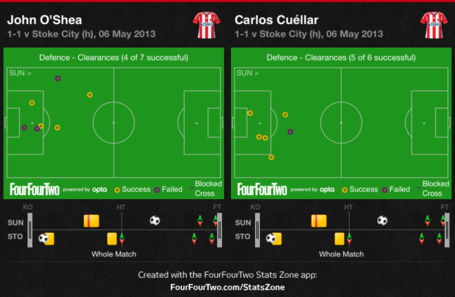 Stoke didn't completely bypass the midfield, as N'Zonzi was given a similar role to N'Diaye in the Sunderland team. The problem was that the gap between the away midfield and attack was large, so moves generally broke down. Stoke looked most dangerous on the break, but a look at Sunderland's interceptions shows how Paolo Di Canio refused to be cautious after Gardner's dismissal. Time and again in the second half, Sunderland players - most often Danny Rose - dashed forward to intercept the ball and break forward. 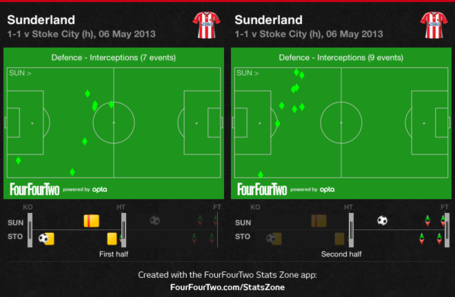 Meanwhile, despite N'Zonzi offering snippets of attacking intent, Dean Whitehead was extremely lateral in his movements of the ball. This played into Sunderland's hands - it allowed them to get men back, and their shape was generally very good throughout the second half. 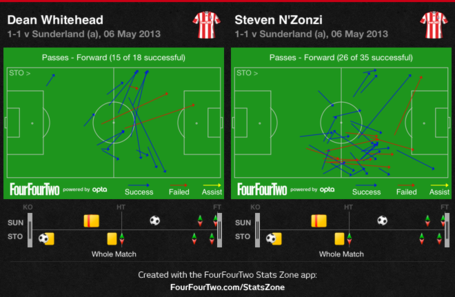 John O'Shea may have scored the equalising goal, but Adam Johnson was undoubtedly the star of the second half. With Sessegnon injured and McClean misfiring, the pressure fell on Johnson's shoulders, and he rose admirably to the challenge.

Sunderland's £10m signing actually lost the ball more times than anyone else in the game (28), but this was also a reflection on just how heavily involved he was. Johnson touched the ball 66 times on Monday evening. N'Zonzi and Rose bettered him, but both were playing in positions that regularly see more of the ball than a winger. 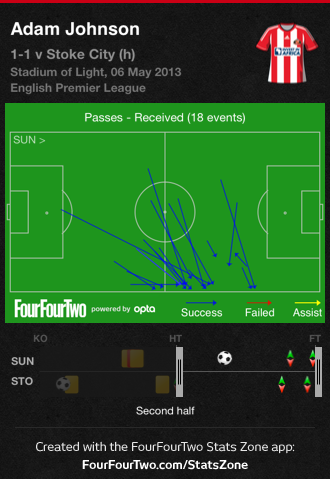 Sunderland's second half strategy was startlingly obvious: give the ball to Johnson. It did not always end in success, but the right winger had the measure of both Charlie Adam and Ryan Shotton, even with Pulis having instructed them to double up on him. So clear was Johnson's dominance that Adam was substituted through sheer exhaustion, despite being the only Stoke midfielder who looked capable of creating anything of note for much of the game.

Johnson stayed wide and was backed up well by Jack Colback, whose tireless runs up and down the line ensured Johnson was allowed an element of time and space to work some magic. It wasn't a faultless performance by Johnson, but his attacking intent lifted both the crowd and the side as a whole, and he was pivotal in keeping the mentality of his side focused (as was Rose at left-back, through his aforementioned interceptions).

Sunderland's goal, of course, came from a set-piece, but they could have hoped to have done better from open play. A big problem remained a lack of incisiveness in the centre of midfield. 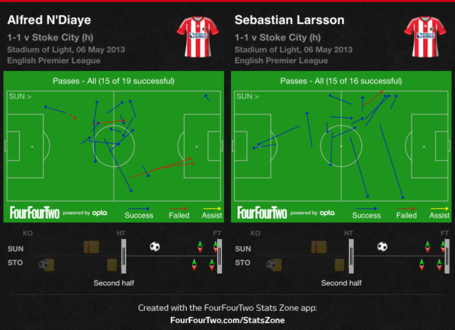 Perhaps the greatest tactical effect of Craig Gardner's red card was that, with Stoke not changing their game plan, it made the tough task of breaking them down in central areas significantly more difficult. As stated, Johnson found pockets of space in the first half with little support; in the second half, those pockets were devoid of a Sunderland man.

This was not the fault of N'Diaye or Larsson, it was simply a case of numerical disadvantage. Danny Graham has been criticised in some quarters for poor movement, but he faced a tough task on Monday, and battled fairly well.

Sunderland spent a lot of their time in wide areas as they were unable to penetrate centrally. Their goal, of course, came from a cross, but it was one of only five successful crosses from 24 attempts overall.

Low on numbers and attacking quality, this was a point derived more from sheer will than any sort of tactical genius. Still, Paolo Di Canio should be lauded for his motivational qualities and also his decision to keep up the tempo even with ten men. In the second half Sunderland pressed far better and more frequently than they had in the first.

Gardner's dismissal changed the game in strange ways. On one hand, it severely hamstrung Sunderland's hopes of winning against a side that were forever happy with a point. On the other, it spurred his team-mates into action, and their efforts garnered a deserved point.