Sunderland's final game of the season ended in last-minute defeat, but were Spurs good value for their win? We take a tactical eye to Sunday's proceedings at White Hart Lane.

Share All sharing options for: Talking Tactics: Tottenham Hotspur (A) 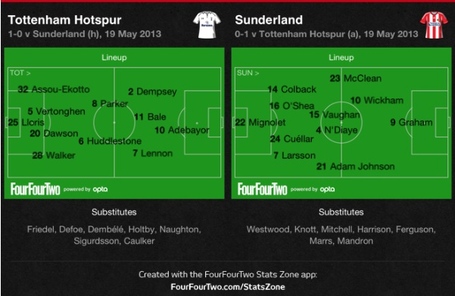 Paolo Di Canio was forced into naming two makeshift full-backs as Seb Larsson and Jack Colback were deployed in place of the dropped Phil Bardsley and the ineligible Danny Rose. Connor Wickham also returned to the starting line-up, partnering Danny Graham in attack. Tottenham lined up in their customary 4-2-3-1 system, with Gareth Bale again in the central role behind Emmanuel Adebayor.

Not for the first time, Colback was asked to deputise at left-back and again performed admirably. Initially facing Aaron Lennon, he nullified one of the league's trickiest wingers as well as joint-leading the game in tackles and interceptions. 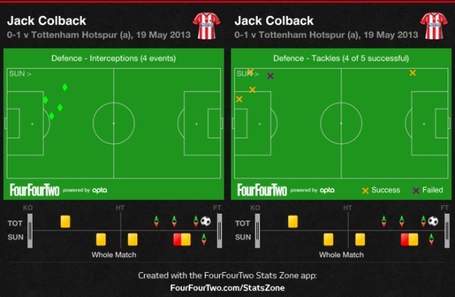 That Andre Vilas-Boas repeatedly switched Lennon onto the left flank - with Clint Dempsey moving over to the right - was a testament to Colback's defensive display. The graph below shows that Lennon's only successful cross and dribble in the game came on Spurs' left side - away from Colback. 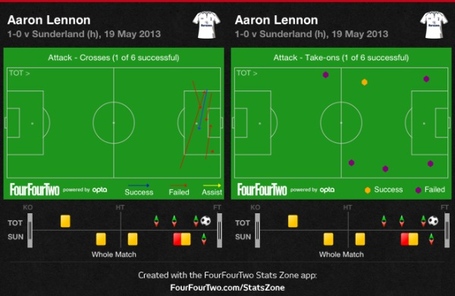 In addition to his tackles and interceptions, he made five ground duel wins (again a Sunderland high) and was credited with four blocks, two of which preventing Tottenham goals.

Not Backwards In Going Forward

In the opening exchanges, Sunderland had great difficulty in retaining possession in the attacking half, often enabling their opponents to build attacks from deep. Key to this was the passing ability of centre-back Jan Vertonghen, who was the most active in the game with 93 touches and 64 passes (58 successful, 91% ratio). Whilst the Belgian was methodical in his play, Tottenham also sought to mix things up by playing long, searching passes - with the aim of getting behind Sunderland's defensive line quickly. 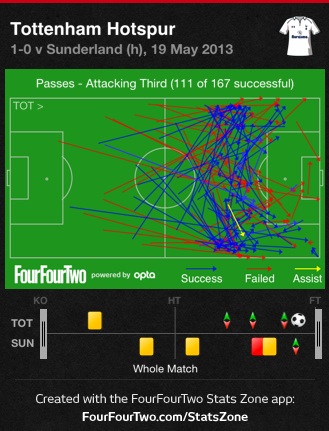 The graph above depicts that Spurs were not averse to going long, and it had differing results in the first half. Both Michael Dawson (25 long passes) and Tom Huddlestone (14 long passes) were prevalent in trying to find a way behind the visiting back four - a tactic which increased as the game went on as the hosts were unable to play their way into the penalty area (as shown by the graph).

A Job Half Done

As a result of Tottenham's superior possession (69% to Sunderland's 31%), the visitors were faced with a plethora of crosses, yet only 6/34 were successful. Whilst this is another example of Sunderland's defence individually and collectively responding to attacks, only 21/42 clearances were successful. 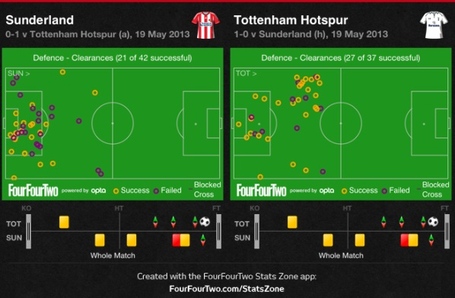 The purple symbols in the graph above indicate attempted clearances, and with so many in and around the penalty area, it provided the hosts with opportunities to recycle possession in advanced areas.

On another day this is a game that Sunderland could have won. Despite the discrepancy in possession, and ultimately attempts at goal, the chances that Graham and Wickham had either side of half-time needed instinctive and reactive saves to deny the visitors from scoring. It took a typically great strike from Bale to beat Simon Mignolet.

As touched upon above, Di Canio had organised his side well and will be encouraged that they remained competitive throughout despite being without so many first-team players. With changes in personnel widely expected, such tactical foresight will stand Sunderland in good stead for next season.