Silly season is upon us, and Sunderland are being linked with summer moves for just about everyone. Could one long-standing summer target be one to materialise?

Le Havre midfield prospect and long-term Sunderland target El Hadji Ba could be set for a summer switch to Wearside after appearing to confirm the move on Twitter.

The Frenchman is available on a free transfer this summer having reportedly turned down a fresh deal at The Stade Oceané, and has been attracting interesting from a plethora of clubs including Champions League finalists Borussia Dortmund.

But when asked directly on Twitter by @SunderlandAFC11 whether he was headed to Sunderland instead, the 20-year-old replied 'yes' before deleting the tweet. 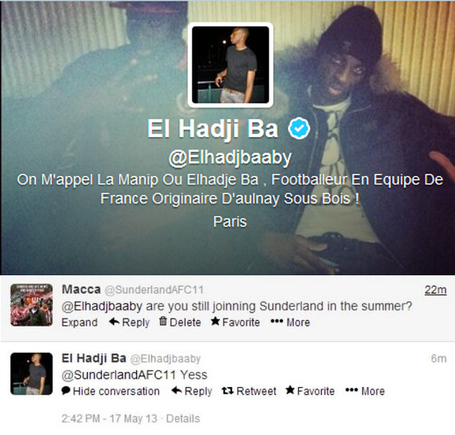 How much can be read into it is anyone's guess really, though it does seem relatively conclusive. Known Sunderland target, asked directly about Sunderland move, answers concisely. Time will tell.

Ba is highly regarded in France, and is the midfield partner of Juventus' Paul Pogba in the French under-20s side, having also been capped by Les Bleus and previous youth levels.

The player himself also recently asserted his desire to move to England.

I would love to play in England one day. If teams have a good enough offer, then they (Le Havre) will let me go.

That seems to have been the polite way of saying it, however, as Le Havre wouldn't have a lot of choice in the matter as he is understood to be out of contract this summer, though his age would mean that a likely small compensation fee would be due should someone snap up his services.