Sunderland inched ever closer to Premier League safety on Sunday afternoon, but could not secure the three points that would have confirmed their survival against Southampton. A 1-1 draw was more than the Black Cats deserved, as an insipid performance brought the curtain down on a miserable home season at the Stadium of Light. 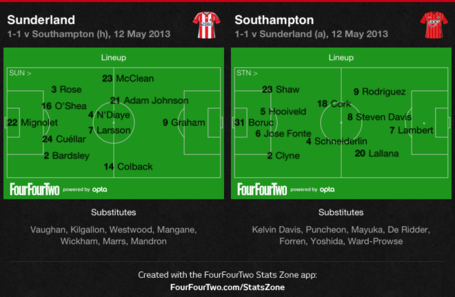 Paolo Di Canio, somewhat worryingly, again opted for a similar side to that which struggled in the first half against Stoke City. Phil Bardsley replaced the suspended Craig Gardner at right-back, which meant that Jack Colback again lined up on the left wing with James McClean on the right (the above graphic is wrong, as Colback and McClean did not switch wings until the fifteenth minute, when it had become abundantly clear that the original strategy wasn't working).

Di Canio's willingness to play an actual right full-back in that position is logical, but seemed odd given that Colback has now had two solid performances there in recent weeks. Colback would ultimately end up back on the left wing after half-time, when Sunderland went 4-4-2 and brought Connor Wickham on for the ineffective James McClean.

As for the visitors, Mauricio Pochettino also opted to start with just one up front, but he surrounded Rickie Lambert with two adventurous wide men (Rodriguez and Lallana) and the tidy Steven Davis. Morgan Schneiderlin and Jack Cork offered an anchoring presence in midfield, expected to protect a back four that has now leaked 36 goals on the road following Sunday's game - the joint third highest in the Premier League.

A Lopsided Opening Half

Disappointingly, Sunderland started this game in much the same way they had on Monday night against Stoke. Their passing was poor - 22 of their 63 attempted passes in the opening twenty minutes went awry - and they lacked the high-tempo pressing that Di Canio has tried to instil since his arrival a month and a half ago. 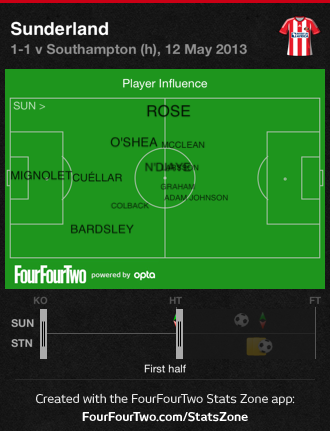 One of the main problems for Sunderland was a startling lack of balance. In truth, they were all too predictable. Danny Rose is frequently the most likely man to touch the ball for the Black Cats, again leading those stakes on Sunday with 74 touches. Problematically, once teams realise this, they simply focus their energies on Sunderland's left, shown in how James McClean had a torrid time even after having been switched to his preferred wing.

With Adam Johnson again deployed "in the hole", Southampton had little to worry about with regards to Sunderland's right side. Phil Bardsley's goal was out of keeping with a man who is largely poor going forward, while Jack Colback is simply not a winger. In the opening twenty minutes Sunderland completed nine passes in the attacking third; all of them came down their left wing, and none of them resulted in a meaningful chance.

The visitors kept the ball better than their hosts throughout the game, but their ability to do so in the early stages set the tone of the match. 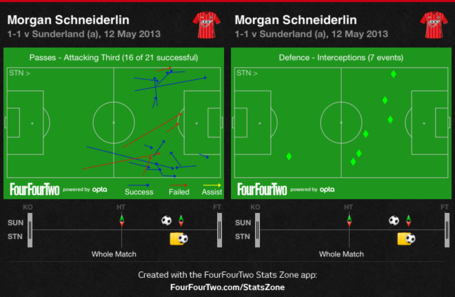 Key to the visitor's relative dominance in this game was the impressive Schneiderlin. Although selected as a defensive-minded player, the Frenchman helped his side move up the field, consistently looking to get forward and beyond the likes of Alfred N'Diaye and Seb Larsson. His hefty number of interceptions in Sunderland's half stopped the supply route to Johnson in the first half - he barely had a touch - before then defying the ability of Connor Wickham or Danny Graham to really do anything of note in the second.

On the subject of Graham, he was one of Sunderland's poorest performers. For all the pluck he has shown in recent weeks, he was well below par against the Saints; his second half air-shot summed up his day. 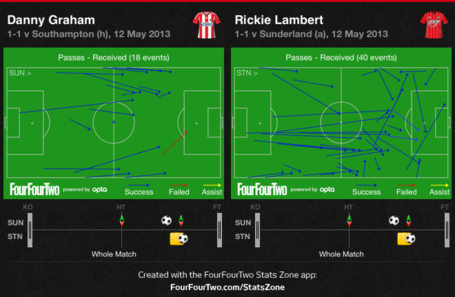 As shown, Rickie Lambert was a considerably more involved presence than the lethargic Graham. Now, of course, this was not just a matter concerned with the two men in question. Southampton's Lambert was the beneficiary of a side that showed much more creativity and passing accuracy in midfield.

Yet, still, this was a bewildering performance from Graham. All too often his runs into space went against his teammates thinking, or left him stranded in a blatant offside position. Graham touched the ball just 21 times, yet had the most unsuccessful touches (three) of any of his teammates. The one time he received the ball in the Southampton penalty box, his poor touch saw the ball lost almost instantly.

It would be unfair to expect Graham to single-handedly drag Sunderland into winning positions, but they were hamstrung by a very poor performance from their lone frontman. That said, Connor Wickham struggled to make an impact in the second half either. The gap between Sunderland's defence and attack - something Di Canio had previously managed to lessen - was back to it's old "gaping chasm" style.

Whether by mismanagement or good work from the opposition, Sunderland's central midfield duo each occupied the wrong roles. 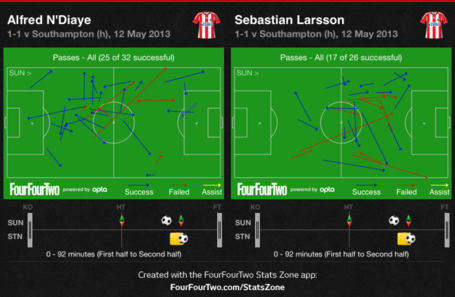 Seb Larsson was consistently the man furthest forward out of him and Alfred N'Diaye, despite the latter having recently shown his ability to move the ball upfield with accuracy and speed. Larsson was ineffective, misplacing most of his central passes into attacking areas and thus often going wide instead, yet he was perennially the more advanced of the two men.

N'Diaye had a good game, and showed plenty of stamina, but his deeper role lessened Sunderland's chances of creating anything through the middle.

As a result, they went wide time and again. As discussed, the first half strategy of playing entirely on the left wing was easily identifiable, and thus easy to stop. In the second half, Adam Johnson saw a lot of the ball on the right-wing, but a combination of poor crossing and not enough people in the opposing area (not to mention Graham's reactionary movements) meant his numerous crosses came to nought. Indeed, Sunderland competed in just two aerial duels in the Southampton box. 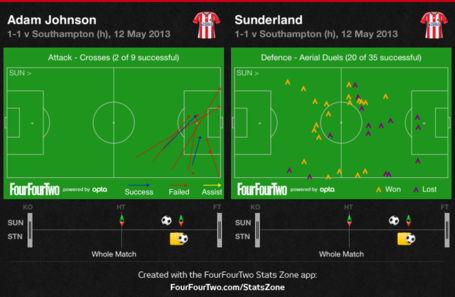 Aside from being bettered by a visiting side that kept the ball well for long periods and also counter-attacked with purpose and success, Sunderland on Sunday also continued a worrying trend of recent weeks - poor defending at corners. 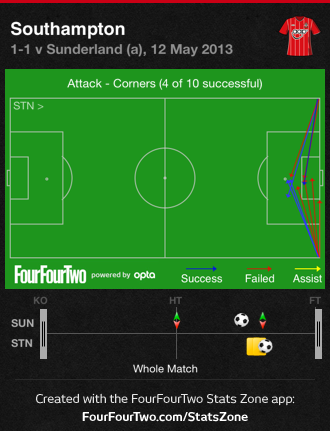 Under Martin O'Neill, Sunderland were a fairly solid bet at defending wide balls into the box. Using the much derided - yet hugely successful - zonal marking system, the red and whites rarely conceded from corners.

Now, under Di Canio, they have seemingly abolished their preference for zonal marking, and instead embraced a man-to-man system instead. In a side that has proven itself so prone to losing concentration, this is a dangerous move. Goals were conceded from corners against both Aston Villa and Stoke City. Yesterday's equaliser may not have came from a corner, but the Saints did find a man with 40% of their wide set-plays - a concerning statistic for a side who previously defended them as well as Sunderland did.

This was yet another game where Sunderland's players largely shirked the challenge in front of them. Needing a win to secure safety on their own terms, the Black Cats put in a performance scarcely deserving of a point, with only a handful of players capable of holding their heads high afterwards. 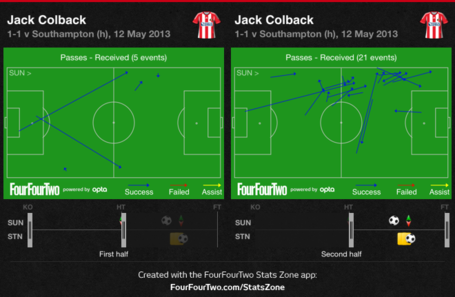 Jack Colback was undoubtedly one of these. Terribly underused in the first half, Colback was about the only outfield Sunderland player who stepped into the breach in the second, constantly looking to be involved and - in contrast to the accusation that he only ever moves sideways - offering an attacking presence.

Sadly, he was the exception rather than the rule for Di Canio's men. This was another insipid performance from a group of players that have shown time and again that they struggle to find the stomach for a battle on a regular basis. Yes, they are a depleted squad, but there were too many who went missing again on Sunday.

Should Sunderland survive this season, Paolo Di Canio has a lot of work on his hands this summer.

Sunderland Vs Southampton: As It Happened