Come one, come all, it's time to have a ball. Or not. Yes, contractual Roker Report obligations (or something like that) dictate that we simply can't get out of providing a tactical analysis of Monday's crushing loss at Villa Park. So come on in, but don't expect to enjoy what you find...

Share All sharing options for: Talking Tactics: Aston Villa (A) 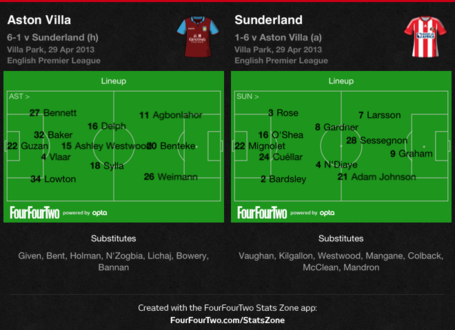 Paolo Di Canio sprang something of a surprise before a ball was even kicked in the Midlands, dropping both Jack Colback and James McClean from his starting line up. Phil Bardsley replaced Colback at right-back, logically offering balance to the side, but the removal of McClean from the team was altogether more baffling. Not only is the Irishman a handy winger in away games - he never shirks defensive responsibility - but it also meant splitting up the midfield duet of Seb Larsson and Alfred N'Diaye that had worked so well in the past two games. With Larsson shifted to the left, Craig Gardner reappeared in the centre of midfield having served his suspension.

The home side employed a 4-3-3 formation, one with an emphasis on counter-attacking play. Christian Benteke is enormously important to the Villains' hopes of success given the preferred system of Paul Lambert: the boulder-like Belgian acts as both target man and skilled battering ram up front, and the likes of Gabriel Agbonlahor and Andreas Wiemann are expected to offer wide support as quickly as possible, with full-backs Joe Bennett and Matt Lowton following suit.

Sunderland actually started this game fairly brightly. The confidence of recent weeks was evident as, against a young home side, Di Canio's men looked to nick the ball high upfield and move forward in a direct manner. In the first ten minutes alone, the Black Cats had three shots blocked inside the Aston Villa penalty area, and were probing rather effectively - particularly down Adam Johnson's right side.

Villa, meanwhile, looked anxious. Knowing the magnitude of this game from their point of view, they struggled to connect passes in the final third, despite moving the ball effectively down their own right via Lowton - a theme that would become ever more pronounced as the game went on.

There wasn't too much in the game for much of the opening half. Sunderland's possession play became ever more sloppy, though not until the 26th minute did Villa have any meaningful attempt on goal, but, in truth, Agbonlahor should have scored after an excellent one-two between himself and Benteke.

It wasn't until Ron Vlaar's stunning 30-yard strike that they properly believed in themselves. It may have been a shot in the dark, but the defender's first goal for Lambert's men came as a result of him knocking the ball into space that was created by Sunderland not getting out quickly enough having seemingly cleared the ball.

Danny Rose would equalise immediately after with the visitors' one true moment of quality in the game - an excellent move down the left side - but it was Villa's second that paved the way for the debacle of the second half.

Fingers have been pointed at the whereabouts of Phil Bardsley in Wiemann's breakaway goal, but, for once in the game, the Sunderland full-back was doing what his manager expected of him. With Craig Gardner in possession on the right side, Bardsley overlapped him - just the kind of positive attitude Paolo Di Canio has asked for from his wide defenders. 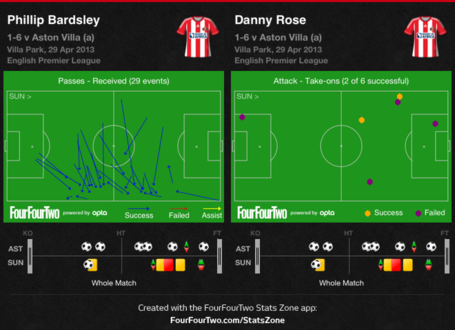 In both Bardsley's receptions and Danny Rose's dribbles, it is clear that Sunderland's full-backs have been told to get forward and support those ahead of them. This is, to be honest, refreshing. The problem last night came when Gardner idiotically sought out a high-risk cross-field pass. In losing possession, with Sunderland having overloaded their right side, Gardner took numerous team-mates out of the game, allowing Villa to do what they do best and counter-attack. Matt Lowton's assist was excellently measured, but the move was only allowed to arise because of poor decision-making on Gardner's behalf.

The Second Half Meltdown

Even at 1-2, Sunderland were still in with a great shout of getting something from the game. That hope all but vanished when Benteke nodded home his first, and Villa's third, on 55 minutes. The home side were fortunate in that the initial Agbonlahor effort was deflected, making it difficult for Mignolet to do anything other than palm the ball into his countryman's path, but questions should be asked again as to why no one in a red and white shirt closed the first attempt down. Indeed, Agbonlahor skipped all too easily past John O'Shea - Villa making a successful dribble in the middle of the pitch close to the Sunderland area was an all too frequent occurrence. 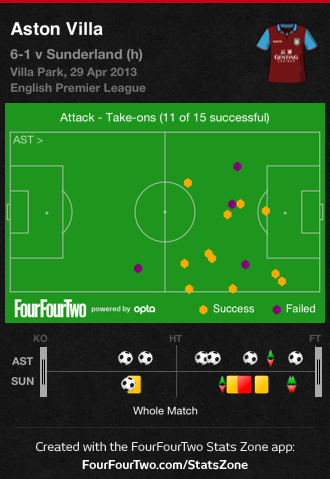 So too was the presence of Lowton in the game's proceedings. Benteke may have stolen the show, but the young right-back was the most important man in this game - he was the best performer before half-time, and touched the ball 113 times, considerably more than any other player (Danny Rose was next, on 85). 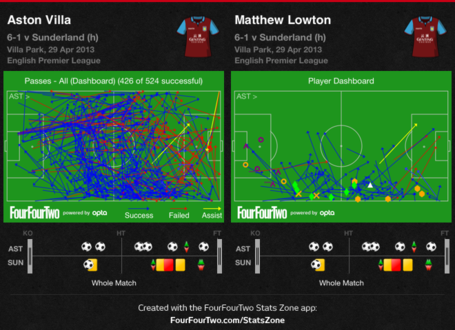 Lowton's good work in the opening 45 minutes made it all the more baffling that Paolo Di Canio did not make a single change at half-time. For a man renowned in his short managerial career so far for swiftly seeking to rectify obvious problems, this was an odd moment of hesitation.

The obvious move at half-time was to bring on James McClean, for two reasons. First, it would help out Danny Rose. With Seb Larsson ineffectual in front of him and spending too much time drifting inside, Sunderland's left-back found himself the victim of a two-on-one situation - with Lowton the benefactor. Bringing on McClean would have combatted this.

Secondly, it would have helped Sunderland in an attacking sense. Their best player in the past three games, Stephane Sessegnon, struggled to do anything of note before his sending off. This was down to poor possession play by the team as a whole, but also because, in employing Johnson and Larsson as wide men, Di Canio selected two people who spent a lot of time going infield. In turn, this compressed the space in which Sessegnon could look to do his good work, and he was a non-entity throughout. 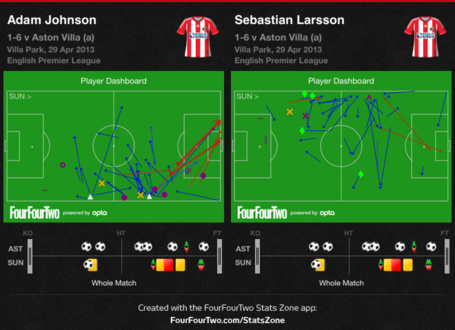 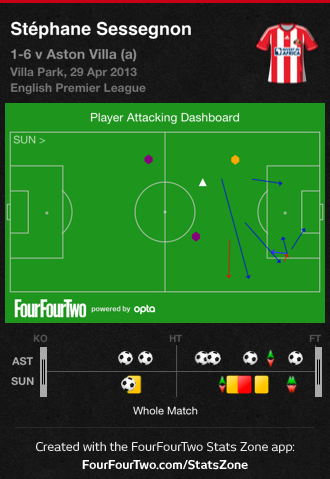 McClean was eventually introduced two minutes after the hour, but by this stage Sunderland were 4-1 down and swimming against the tide. Even so, a look at his activity, and how rigidly he sticks to wide areas, suggests that his non-inclusion was one of the first big mistakes of the Di Canio era. 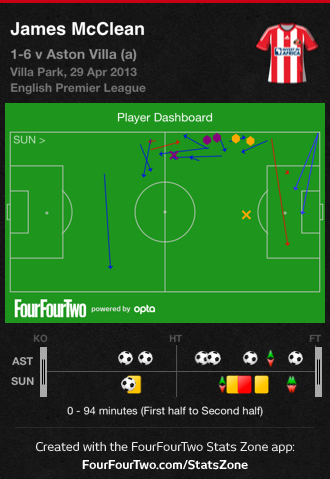 Even after that fourth goal, Di Canio refused to shut up shop. This is not an infrequent ploy among rookie managers - Roy Keane did much the same during his reign at Sunderland, most notably in the 7-1 loss at Everton in November 2007.

Yet, while that day saw Sunderland thumped for maintaining a high defensive line when all signs suggested they shouldn't, Monday's loss was ultimately the result of continuous individual errors. Di Canio should have looked to go more compact - all semblance of shape truly had disappeared - but each of Villa's last three goals came as a result of glaring individual errors.

For the fourth, Carlos Cuellar failed to challenge Benteke in the air from a corner; a set play Sunderland usually defend excellently. Then, Cuellar tried to dribble the ball out and failed miserably, allowing the Belgian to notch his hat-trick. Sunderland's continued high line was exposed for Agbonlahor's strike for the sixth, but it only came as a result of David Vaughan's woeful backwards pass when the side was otherwise in comfortable midfield possession.

Di Canio's unwillingness to change tact last night - though not the chief architect in his side's downfall - did point to an element of naivety. Sunderland continued to try and press high and nick the ball, and actually completed more interceptions in the second half (13) than they had in the first (10). 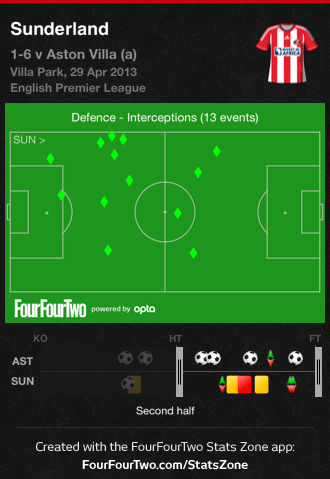 The problem was that, with confidence shot, they either wasted possession or were too scared to go forward with any great attacking intent. Alfred N'Diaye, whose slide rule ball to Sessegnon was the second-best pass of the opening half (behind Lowton's), was very shy with regards to seeking a killer final pass. As a result, Danny Graham's impact on the second half was almost nil - particularly when Sessegnon departed, and the link between midfield and striker disappeared. 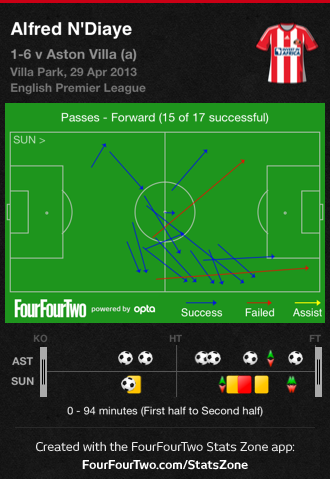 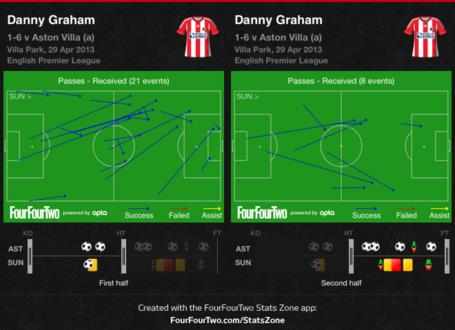 If anyone had any doubts over the brittleness of this Sunderland side's confidence, they need only observe their passes into the final third in the second half, where infrequent balls forward are overshadowed by a myriad of sideways moves. This was a devastating contrast to their last away game, at Newcastle, where a side full of bravado sought constant progression whenever they held possession in the opposing half. 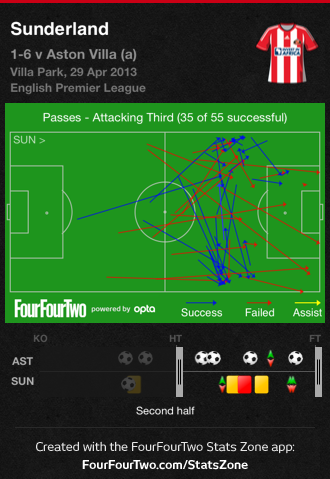 To their credit, Aston Villa put in a sterling performance, arguably the best of their season. Their play reflected Sunderland's of recent weeks: they chased every second ball, harried opponents, timed interceptions carefully and counter-attacked with impressive speed and aptitude.

But, for Sunderland, the underlying theme was that of individual error. Too many times players opted for the wrong pass, or executed the right idea poorly. In defence, they were woeful - Carlos Cuellar will have few poorer games than this.

Paolo Di Canio will have learned plenty about his team from this game, but so too have we learned plenty about the Italian manager. He is not, after all, the man with the midas touch. The breaking up of a central midfield that had performed so well together was a decision that seriously hampered his side's chances of winning this game. As too, was the subsequent non-inclusion of James McClean.

Ultimately, though, blame cannot be laid solely at the manager's feet. Di Canio has emphasised the need for unity since his arrival on Wearside, but on Monday evening any sense of shape and togetherness was lost amid a haze of claret and blue attacks. Villa shellshocked Sunderland, who wilted embarrassingly - now the Black Cats must bounce back against Stoke this coming Monday.