Paolo Di Canio's first game as Sunderland manager ended in defeat, but there were a few positives to take from the performance. This week's Talking Tactics analyses the 2-1 defeat to Chelsea at Stamford Bridge.

Share All sharing options for: Talking Tactics: Chelsea (A) 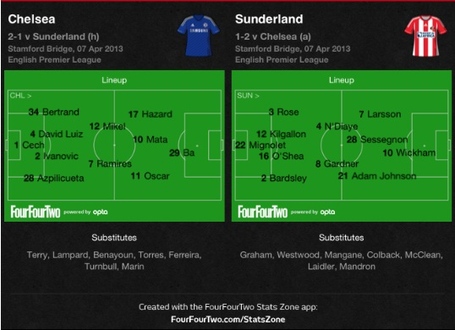 Paolo Di Canio kept faith with the same system that Sunderland has used for much of the season as Stephane Sessegnon was deployed just off a lone front man. The one surprise was that the visitors' attacking focal point was Connor Wickham, with Matt Kilgallon also making a surprising return in place of the injured Titus Bramble.

In the build-up to this game, Di Canio outlined his tactical intentions; an advocate of 4-4-2, with a regimented pressing game key in his plans. The merit of this is clear - the higher up the pitch you win the ball back, the closer you have to travel to the opposition's penalty area.

Its execution, particularly in the first half, was encouraging. Sunderland pressed from the front, forcing Chelsea into hurrying passes - the visitors managed almost twice as many interceptions (13-24 in Sunderland's favour), seven of which were attributed to Craig Gardner. That Gardner managed five of those in the first half indicates that the work put in by those ahead of him was certainly rewarded by the Black Cats assuming possession once more. 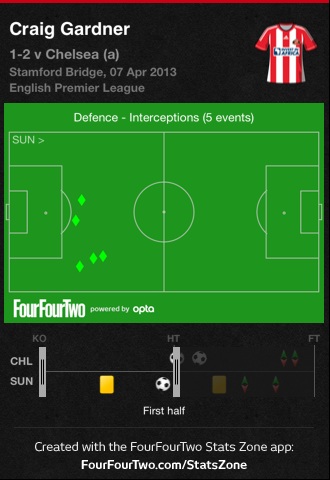 In addition to recovering the ball, Sunderland were also adept at winning possession outright, making 21 successful tackles to Chelsea's 16. The graph below depicts where each challenge was made, and most noticeable is that over half are in the middle or attacking third of the pitch - positions in which Sunderland could quickly counter from, which happened in the first half. The chance where Adam Johnson's shot was blocked by David Luiz, and the build-up to the opening goal (although the move began from a much deeper position) indicate that the urgency in the pressing game that Di Canio desires manifests into transitional, counter-attacking opportunities. 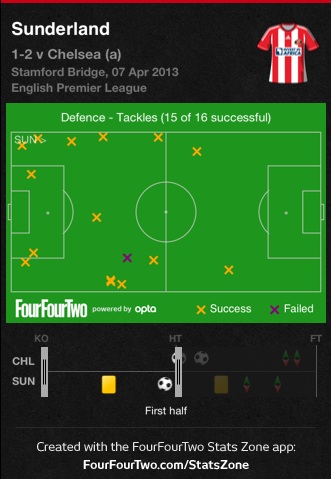 Such levels unfortunately could not be maintained, with Sunderland only succeeding with five more tackles in the second half.

After just three minutes, Sessegnon chested the ball beyond Branislav Ivanovic before lashing a shot into the side netting, when perhaps the ball should have been cut back across the six-yard box to Wickham. It proved to be the only time Sunderland were able to penetrate Chelsea's central defensive pairing. As the game progressed, Ivanovic was a pillar of protection; making nine clearances, four tackles and winning 7/8 ground duels. 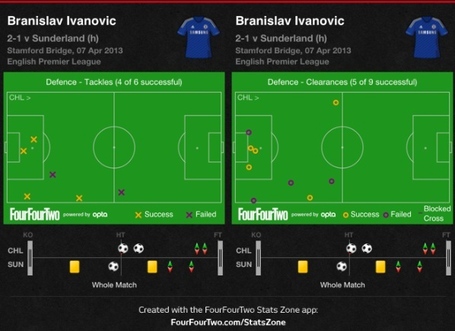 Whilst again proving a formidable opponent, Wickham's performance against the seasoned international was another source of encouragement. When directly up against Ivanovic, the England under-21 man naturally found it difficult - Wickham managed just 2/6 aerial duel wins and 4/15 on the ground yet had the awareness to free himself of Ivanovic by dropping deeper to keep attacks alive.

The graph below indicates how Wickham was largely denied possession in and around the penalty area, but the striker still found ways to contribute. A prime example of such being the two touches he took to free himself of Ramires, before finding Sessegnon, who was eventually crowded out at the edge of the penalty area. 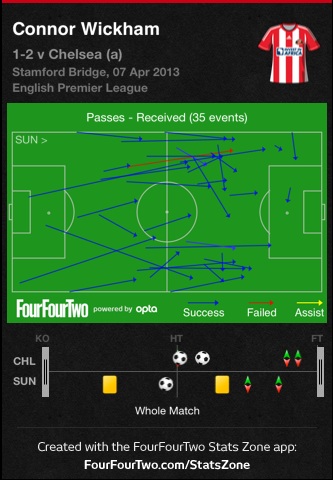 An All Right Start

Di Canio's preference for an inverted winger was discussed on our site last week, and he used two in this game, with Seb Larsson starting on the left-hand side of midfield. The graph below shows how effective each player was, and where they were most effective. 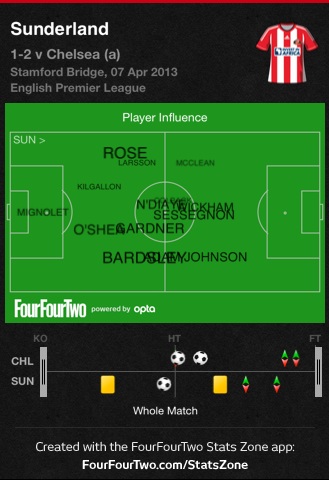 Of Sunderland attacks, 45% were registered as starting from, or featuring, the right-hand side, explaining why Johnson and Phil Bardsley are so prevalent. Johnson was credited with creating three chances - the highest in the game - whilst 10/13 Sunderland crosses came from the right (Johnson and Bardsley each responsible for five, with one success).

The decision to start with Larsson on the left lends itself for the wingers to change in-game, yet that did not happen. Furthermore, Larsson's contribution was poor. He managed just two passes in the final third, and was the weak link in the pressing game. Recent editions of this feature have highlighted a drop-off in his ground duel win percentage, and his 1/7 successes was the lowest of any outfield player. He also was the game's highest foul-maker, conceding a free kick on five occasions.

James McClean was introduced on 71 minutes, and looked to reignite the pressing game. The player influence graph shows how, despite Chelsea having the ascendancy in possession at this time, he retained a high starting position and contributed with 2/3 ground duel wins and three interceptions. This next image indicates where both Larsson and McClean received the ball during the game - a further indication that McClean was stationed in a more advanced area. 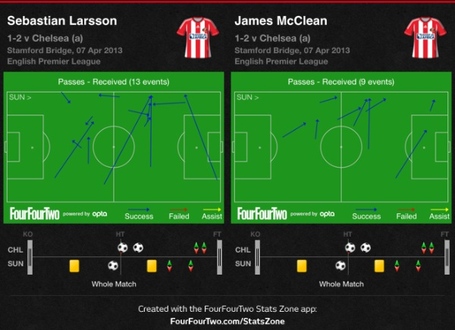 The only discrepancy between the two sides in terms of key statistics was possession; Chelsea were forced to make one more clearance (27-26) and edged aerial and ground duels, whilst Sunderland were more successful tacklers and retrieved the ball more through interceptions.

Chelsea enjoyed 61% of the ball to Sunderland's 38% and as a result completed more passes in key areas (the final third pass count favoured Chelsea 195-90). Despite that, Sunderland can take heart from the fact that Chelsea was unable to truly test Simon Mignolet in goal, as well as working the more promising openings in the first half. That this game produced three goals with just three shots on target emphasises that it was finely balanced, despite Chelsea's possession.

The introduction of Fernando Torres at half-time gave Chelsea a more purposeful presence up front - his impact almost instant in the lead to the equaliser. He had two further chances in the game, both of which ending off target, but provided a spark that enabled the hosts to seize the momentum in the game.

Sunderland were noticeably deeper in the second half - something that could equally be attributed to fatigue after the first half's increase in tempo from previous games, or the lack of confidence that has engulfed them in the situation they find themselves in. Di Canio has a full week to further convey his tactical message before the visit to Newcastle United, his hope that the positives seen in this game can soon be turned into league points.

Chelsea Vs Sunderland: As It Happened