With Sunderland breaking new ground and importing footballing ideals from the continent, we delve into the past to uncover the true roots of Paolo Di Canio's philosophies and methods.

Share All sharing options for: Studious Di Canio Seeking To Emulate, Not Innovate

Since Paolo Di Canio started swashbuckling Sunderland's way to safety, he has been widely hailed for being the man to finally modernise the club's training and matchday methods. That is understandable. His impact has been widely felt and little short of spectacular, especially from a tactical point of view.

Though if you want to know the real roots of Di Canio's football philosophies and methodologies, then the modern game would be the wrong place to search for answers. You wouldn't even be in the right ballpark in this millennium.

Italian football today is probably more synonymous with corruption and European underachievement than anything else. That wasn't always the case, though.

Indeed, for people of my generation, you think of Serie A and you are immediately confronted with fond memories of ‘GoooooolAZO', Championship Manager Italia, and James Richardson guiding you through the Italian sports papers on Channel 4 from some sun-kissed Mediterranean marina café.

There is no two ways about it - in the late 80s and early 90s, Italian football was the place to be. It was full of glitz and glamour and it was the clear dominant force in the European game.

In fact, in the 10 years between 1988 and 1998, only once (1990-91) was Italy not represented in the European Cup or Champions League final. During the same period, a staggering 12 teams from Serie A played in UEFA Cup finals, including three all-Italian contests.

Hosting the World Cup helped, of course, and the fact that the Italian league attracted investment helped to maintain it. But there still needed to be a catalyst to kick it all off. That catalyst was a former shoe-salesman by the name of Arrigo Sacchi.

In many ways, Sacchi's managerial career was of the burn brightly and burn out variety, so his is a name that has perhaps fallen a little off the footballing map here in England. His greatest achievements came before the onset of the post-Italia 90 boom in this country and a pretty dismal showing from his Italian team when football ‘came home' in 1996 didn't do much to sustain his reputation on these shores either.

Despite that, his influence on football is astoundingly strong. In fact it would be no exaggeration to say that history records him as one of the true tactical revolutionaries of the game. His AC Milan team - a job for which he was widely considered to lack the track record to justify ever being offered - won back-to-back European Cups and is the only truly credible rival to Guardiola's Barcelona in any discussion about the greatest club side of the last 50 years or so.

Sacchi's methods changed the face of Italian football and his students gave strength to his legacy. Fabio Capello is perhaps the most fastidious exponent of those methods, and though Carlo Ancelotti has deviated from them from a shape point of view, Sacchi's philosophies still form the framework of the PSG manager's set-up. You can also see great chunks of it adopted by Marcello Lippi and Giovanni Trapattoni, and the famed ‘6-second' pressing rule of modern day Barcelona is derived from Sacchi's Milan.

Considering Paolo Di Canio grew up watching Italy dominate the footballing world on the back of Sacchi's revolution, and then was a developing player under Capello at Milan, Trapattoni at Juventus, and Lippi at Napoli, it is easy to trace the current philosophies he is bringing to life at Sunderland back to their root.

You'd have to say that sounds eerily similar to the recent impact on Wearside.

Sacchi was a strong believer in a 4-4-2 system with one deep-lying forward linking the attacking and midfield (4-4-1-1 essentially), but his real obsession was with shape and pressing.

I used to tell my players that, if we played with twenty-five metres from the last defender to the centre forward, given our ability, nobody could beat us. And thus, the team had to move as a unit up and down the pitch, and also from left to right.

Pressing is about controlling space. I wanted my players to feel strong and the opponents to feel weak. If we let [them] play in a way they were accustomed to, they would grow in confidence. But if we stopped them, it would hurt their confidence. That was the key: our pressing was psychological as much as physical. Our pressing was always collective.

Right on cue, ‘shape' has become the real buzzword emanating from the Academy of Light during Di Canio's short tenure. After the demolition of Newcastle, Adam Johnson, explained:

He [Di Canio] speaks to you individually and has spoken to me about things such as keeping the team's shape, as he wants it to be perfect. He believes if the team have a good shape then we'll score.

Our shape on Sunday was excellent and we played off that.

It is also something that Seb Larsson has been quick to mention:

He [Di Canio] knows exactly how he wants his team to perform offensively and defensively. His main word is ‘together’. He wants you to do it together.

Sacchi's obsession with always maintaining a team's shape with almost military precision was born of a belief that if you suffocate the space in the middle of the pitch then teams will surrender possession by trying to force the ball through tight areas and your own energy could be saved for attacking.

To implement it, he innovated a training method called ‘shadow football'. During such sessions, of which there were many after Sacchi made double training sessions in Italy the norm and days off rare (remind you of anyone?), the team would leave the footballs inside and instead spend hours moving around the pitch in formation.

That again, has been something that Di Canio has alluded to employing at the training ground:

Even when there was a very hard session of running without the ball he [Adam Johnson] worked hard. Normally the fantasy players they don’t want to work without the ball.

If you work together either on the ball or off the ball, for sure you are going to save energy.

It’s crucial these days to maintain distance between players and move in time and then you can be in the right place.

We have to move in time and that comes from the training sessions.

The desired effect of this 'shadow football' was there always being 25 metres between centre-halves and centre forwards. It allowed the game to be squeezed, ensured no man became isolated, and made a high defensive line operable due to the presence of constant close protection in front of them.

During Di Canio's spell at Sunderland so far, this has been a feature of the play that has been highly noticeable, particularly in contrast to what preceded it. Under O'Neill, Sunderland had a set defensive line. It picked its spot and dug in, meaning that the further forward the team progressed the more stretched it became, isolating individuals without enough support.

O'Neill himself often spoke of the plan to get people like Adam Johnson and Stephane Sessegnon in ‘one-on-one situations'. Success was therefore entrusted to the form of individual match-winners.

Again, that change from being dependant on individuals to win battles to supporting the man in possession as a team though off-the-ball movement has happened before - at Sacchi's Milan.

"Before Sacchi came to Milan," insists Paolo Maldini, "the clash between two opposing players was always the key, but with him it was all about movement off the ball and that's where we won our matches."

That fundamental requirement to strangle the middle of the pitch without the ball upon which Sacchi based much of his success has been hugely evident in Paolo Di Canio's Sunderland. As the diagrams below show, both Newcastle and Everton failed to establish any kind of foothold in the central midfield area and saw attacks funneled out wide. 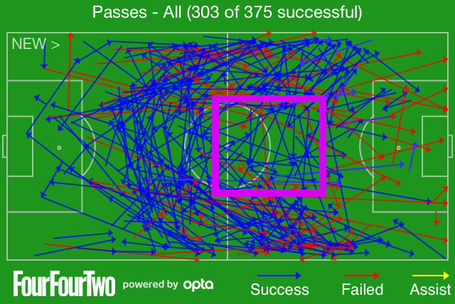 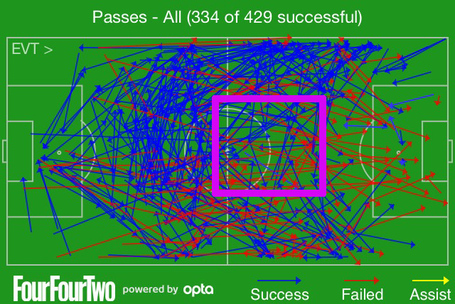 It was also noteworthy that three of the four goals Sunderland scored in those games came after the opposition attempted to force the play through the congested middle and surrendered possession, twice when right winger Adam Johnson pressed inside.

It is something that Di Canio himself has talked about quite obsessively since his arrival:

The heart of the game is in the middle.

If you don't put pressure on your opponents and let them play, at this level they're going to smash you.

It is not just down to my central midfielders, but also my wingers when they play compact.

Everyone in modern football wants to go down the middle to damage the opponents.

The similarities don't end without the ball either. Sacchi, when his team had possession ‘always demanded five ahead of the ball and that there would always be a man wide right and wide left'. Again, Sunderland have changed to a remarkably similar line of thinking under the new manager:

How far indoctrinated into Sacchi's methodology Paolo Di Canio is only time will tell. That it provides at the very least the corner-stones of his own football philosophy is abundantly clear, though. The narrow 4-4-2 with emphasis on maintaining not only the shape at all times but also its size, the obsession with pressing high up the pitch and in packs, and the direct ‘no tippy tappy' game when on the attack - it's all there.

There is a very good chance that the AC Milan side of the late 80s is Di Canio's ultimate tactical blueprint. The side that Sacchi himself considered ‘the closest he ever got to perfection'. The side that changed the face of football and made the Italian game the envy of the world.

Either way, there is nothing especially modern about Di Canio's methods. Quite the contrary. He isn't looking forward for inspiration or looking to innovate. He is very much looking backwards and hoping to emulate.

Whatever he is doing though, I think that we can all agree that right now he is doing it rather well.