Our usual tactical recap of the weekend's game details how Sunderland were able to shut out their opponents for the second game running.

Paolo Di Canio made one change to the side that beat Newcastle - Jack Colback starting at right-back in place of the injured Phil Bardsley. Everton were able to recall Leon Osman to the starting line-up in place of Ross Barkley, whilst Jonny Heitinga replaced Phil Jagielka at the heart of the visitors' defence.

Alright On The Right

The potency of Everton's left-hand side has been well-documented; in Leighton Baines and Steven Pienaar they not only possess two gifted footballers, but a pair that have obtained a fine understanding of each other's play. That, coupled with the fact that Colback was again asked to play an unfamiliar position, meant that the visitors focussed their play down that flank.

Baines took 83 touches in the game - a joint-highest with Marouane Fellaini - and in total 44% of Everton's attacks came down their left. Yet, having relied on its strength and targeted a perceived Sunderland weakness, Baines and particularly Pienaar struggled to influence the game. Baines was responsible for 13 total crosses - half of Everton's total and one more than Sunderland managed - with the graph below showing just three successes. Pienaar managed just one cross, and whilst managing one more touch than Sunderland's most active player, was nullified to the point of switching flanks with Kevin Mirallas on 37 minutes. 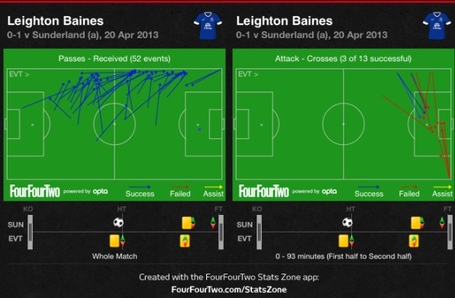 Colback's focus on keeping things simple not only enabled him to shine defensively - his seven interceptions was the most in the game, and his 5/7 ground duel wins was the best ratio of those who completed more than one (tied with Seb Larsson) - but gave his side a balance as he generally protected, whilst Danny Rose on the opposite flank sought to join attacks and provide a spark. 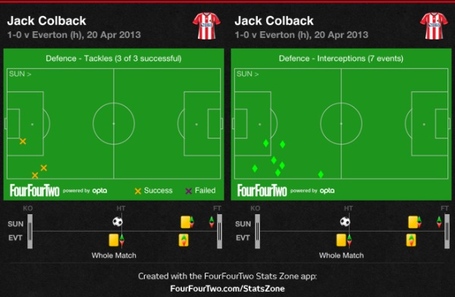 All Shapes And Sizes

Both teams started with an adaptation of 4-4-2; for Sunderland, Stephane Sessegnon was in his accustomed withdrawn position just off the striker with Fellaini providing the main support to Victor Anichebe for Everton. 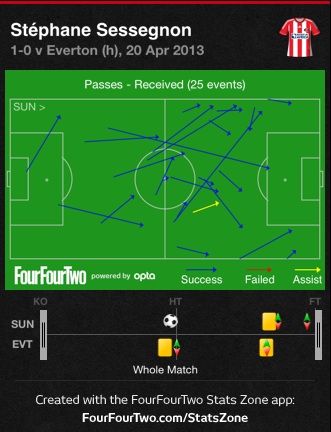 The graph above shows where Sessegnon received the ball - again indicating his preference to drift wide and challenge full-backs. The cluster of arrows near Larsson's assist showed Sunderland was successful in finding Sessegnon in promising attacking situations.

To contrast, Fellaini was restricted to deeper areas of the field, partly because of David Moyes' decision to bring on Nikica Jelavic at half-time - reducing Fellaini's role to central midfield. Despite the position change, the aerial threat the Belgian possesses could still have proven a problem for the hosts, and whilst very effective in the air (he won 9/11 aerial duels) Sunderland ensured that it would not become an issue in or around the penalty area, with John O'Shea equally as impressive (6/8 aerial wins). 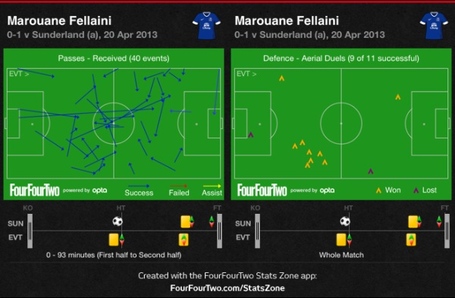 The Start Of Something New

In each of Di Canio's three games in charge, the key tactical trend has been the intention to press high up the pitch. This was seen in the only goal in this game, albeit indirectly. As Baines received the ball, Adam Johnson closed him down but without real intensity.

Just where Di Canio's methods were being implemented was by Larsson, who continued to assume the space in midfield given up by Everton having the ball in their own half. By the time Baines' misplaced pass was played, Larsson was already over halfway and all too ready to intercept, with Sunderland again on the front foot in the attacking half.

The ploy saw Sunderland again make more interceptions than its opponents (14-8 in the home side's favour), and one that was lead brilliantly from the front by Danny Graham. Without a willing runner, which the striker again was, the ‘trap' in midfield cannot be set. Graham not only pressed regularly but also managed to win possession back on occasion - most notably for Adam Johnson's chance in the closing stages. 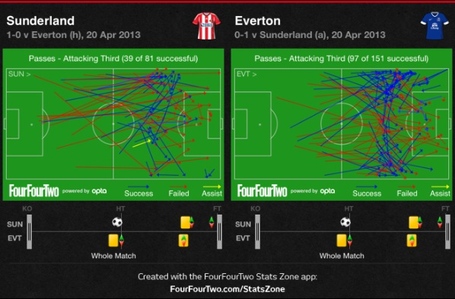 To further extend on Di Canio's organisation, the above graph depicts how both teams were found it difficult to penetrate. Barring Graham's early chance, Everton proved to be their organised and regimented self. That Sunderland could show itself capable of matching a strong team in that regard is a testament to the detail that Di Canio has instructed his side with in just a short space of time.