We finally got one over on Everton and what a great time it was to bury the hoodoo. Here is what we made of it.

Share All sharing options for: Quick Kicks: Thoughts And Reaction From Sunderland 1-0 Everton

What The Gaffer Said

Paolo Di Canio (swoon) was at his smouldering best as he struggled to contain his delight following the game. He told safc.com:

It was an incredible atmosphere - it will go down as one of the best moments in my sporting life.

I'm very emotional - it was great to have the chance to celebrate together once again.

The fans can be very proud of the players today.

They were very disciplined and dedicated and used every last drop of energy out there on the field. I can't ask any more of them; they showed great desire throughout.

We know what [Stephane] Sessegnon can do with the ball; it was another great goal from him. The whole team were very organised and Sess played a great role in the team's shape. He did a very good job today.

Yes, there was pressure from Everton but that's typical in the Premier League, you have to expect that from teams.

We have to keep going, the main job is not done yet but this result is a very big step in getting it done.

There are four games to go. Next it is a trip Aston Villa and we have to go and get the best result we can - three points if it's possible, one point if not.

Today is bigger than last week, maybe not the same feeling or emotion, but in terms of the result - it's a very important step forward.

The Italian is word-perfect once again, feeding the fans' pride and passions. Words are cheap and usually shallow, but when they are backed up this well on the pitch you really can't underestimate their power.

I have lost count of the amount of times I have now sat down and watched Marouane Fellaini absolutely dominate the midfield against Sunderland. Seems like every single time we play them he starts resembling a 10-foot brick wall on wheels.

To give him his due he put in another good performance in this one. He was strong and always carried some menace.

But Alfred N'Diaye really stepped up to the plate and competed with him. The Frenchman stood toe-to-toe and refused to allow himself to be ruffled before, ultimately, coming out on top. N'Diaye is a big lad himself of course, but it was still a coming-of-age performance from a young player and one from which we can all take a lot of confidence.

SoL Rolls Back The Years

During this game you could easily close your eyes and believe you were back in the Stadium of Light's glory days of the late 90s and early 00s. It wasn't just noise - although there was no shortage of that - but a massive buzz around the place too.

It is something we were all worried was consigned to the past. Some kind of aberration caused by the novelty value of new surroundings.

Paolo Di Canio has, with the sheer power of personality, showed that the passion in the stands (the biggest crowd for any football match in Britain on Saturday, incidentally) is still there just waiting to be roused, and his demanding energetic football is just the tonic it needs.

If he can ensure it is sustainable, it may even be enough to wake this sleeping giant of a football club from its slumber.

Danny Graham is still searching for his first Sunderland goal but I doubt you'll find too many complaining about him right now.

Against Newcastle he was always going to run himself into the ground. He had a point to prove. This was a different proposition, though.

Yet his work rate was impeccable once again and he did a superb job for the team. In fact, he was the man chasing back and forcing Everton away from the Sunderland goal in the 93rd minute.

Goals will come for him, and he will have certainly earned them.

Let's Clear Up The Mignolet Confusion

There has been a spate of people questioning why Simon Mignolet wasn't sent off for catching Seb Larsson's back pass. ‘He deliberately denied a goalscoring opportunity' they have cried.

Well the rule book explicitly states that goalkeepers handling the ball inside their area are exempt from the rule. It is in black and white, clear as day. 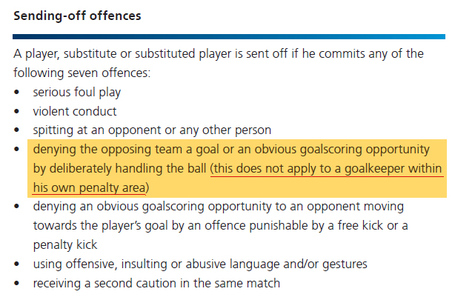 Picking up a back pass is a technical offence, such as offside or foul throws and therefore a booking can't be issued, never mind a red card. (The reason he was booked was for unsportsmanlike conduct)

The back pass rule was brought into the game to stop players from wasting time. It was never designed to stop goalkeepers from making saves which is why the rule is how it is.

Sunderland Vs Everton: As It Happened