Amid the madness that has enveloped Wearside this past bank holiday weekend, it's been easy to forget that, way back on Saturday lunchtime, Sunderland went down 0-1 to the champions-elect. 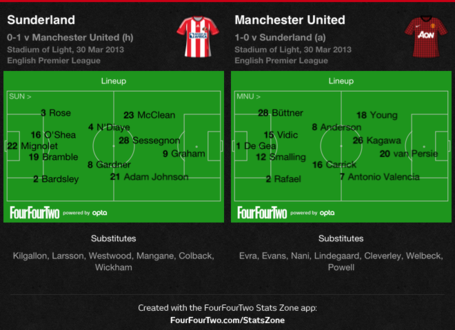 For his final game in charge of the red and whites, Martin O'Neill actually made a fist of naming an attacking first XI. Steven Fletcher and Lee Cattermole were, of course, absent through injury, but O'Neill sought to help out lone striker Danny Graham by moving the attack-minded Craig Gardner into central midfield. Though Stephane Sessegnon began the game just behind Graham, the side's formation fluctuated; at one stage Sessegnon was moved out to the wing, with James McClean coming inside to the centre of midfield in a 4-5-1 system.

As for the visitors, Sir Alex Ferguson named a weakened side, but still one with more than enough in its arsenal to dispose of the Black Cats with ease. Shinji Kagawa headed a central midfield anchored by Michael Carrick, while Alex Buttner and Rafael offered the home fans a tantalising glimpse of what attacking full-backs look like.

It took Sunderland until the 89th minute to register a shot on target, and a listless showing on their behalf ensured United had little to do to secure a 25th win of the Premier League.

Much of this was down to their absolute dominance of the centre of midfield. Michael Carrick was outstanding in the opening half, spraying the ball around at will and stopping Sunderland's attacks from gaining any kind of momentum. The instance in the first half where he chased back and dispossessed James McClean - with relative ease - acted as a microcosm for the game as a whole. 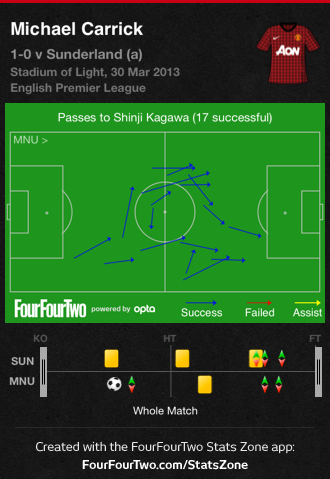 Though Anderson was positioned closer to Carrick than Kagawa, it was the England midfielder's ability to find the latter almost at will that was most disappointing from a Sunderland perspective. Kagawa, up against one of the most static midfields in the league, consistently found space in between the lines, from where he could turn towards Simon Mignolet's goal and move forward. Were it not for a poor display from Robin Van Persie, who never really got going and was well marshalled by John O'Shea and Titus Bramble, United's margin of victory would have been greater. 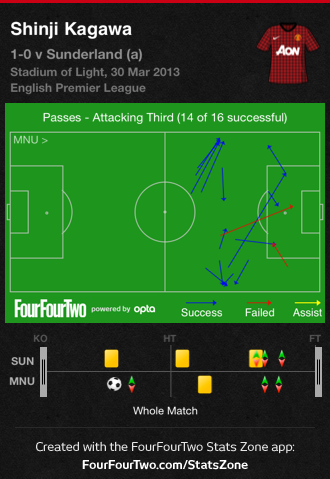 Once again, Sunderland's only real tactic was to get the ball wide and look to score from crossing opportunities. Of course, this relies on getting bodies forward into the box, and beating the first man with the actual cross, something this side has continually struggled with all season. 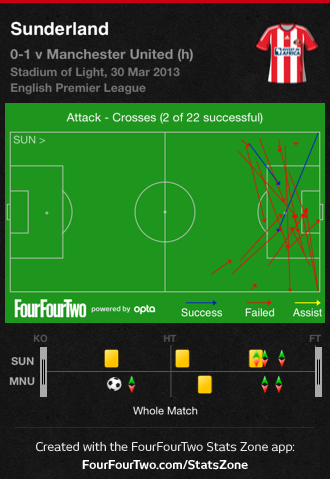 The home side were successful with just two of their 22 attempted crosses - five of them didn't even make it into the opposing penalty box. Most problematic was just where they were looking to cross the ball from; rarely did Adam Johnson or James McClean make it to the byline. The merits of doing so were shown when Graham rolled Nemanja Vidic impressively, running to the line and sending over a cross that forced Jonny Evans into a last-ditch headed clearance.

Sunderland's attacking strategy was all the more odd when we consider who the opposing central defenders were. Though Chris Smalling may not be immediately thought of as one of the league's best in the air, Vidic certainly is, and the Serbian won all 10 of his aerial duels. Smalling, too, was excellent, as Danny Graham was allowed barely a sniff. 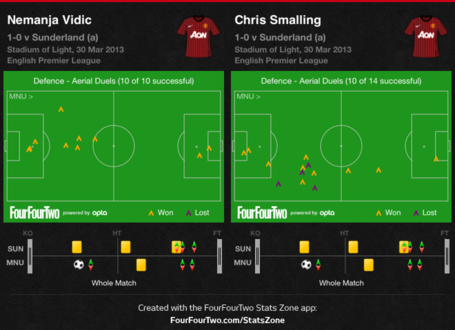 Of course, Graham's lack of involvement was another key problem. Graham himself actually put in a decent shift, but, with the likes of Johnson and Sessegnon offering him no support whatsoever, his efforts went without reward.

All too often, he received the ball far too far from David De Gea's goal to make any sort of meaningful impact. 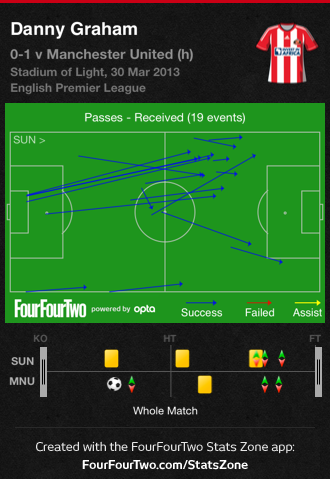 As far as exits go, Martin O'Neill's proved to be the most timid and meek one imaginable. There was no catastrophic thumping like the one Bolton Wanderers handed out to see of Roy Keane. There was no late blunder like the one that consigned Steve Bruce to a final defeat at home to Wigan Athletic.

Instead, there was just, well, nothing. There have been some tame performances in the past twelve months, but surely this was one of the most deflating. Up against a side that, though undoubtedly possessing quality, had one eye on a Monday lunchtime FA Cup game, O'Neill's men could not even muster the ability to seriously challenge De Gea's clean sheet.

O'Neill has since paid the price with his job, but new boss Paolo Di Canio has a tough job on his hands. Chief on his task list will be the mission of injecting some fight and determination into the side - the lack of effort on behalf of Sessegnon and Johnson on Saturday was nothing short of scandalous.

How Sunderland will now line up is anyone's guess, but, if they are to survive the peril of relegation, they will have to be much better than they were this past weekend.