Well, yesterday was brilliant wasn't it? For those of you not watching the highlights again, here's Talking Tactics.

Share All sharing options for: Talking Tactics: Newcastle (A) 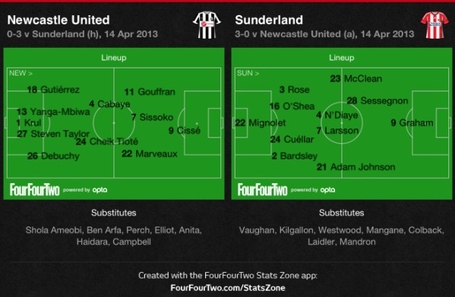 Paolo Di Canio made three changes to the Sunderland team that lost to Chelsea for this crucial Tyne-Wear derby - Carlos Cuellar, Danny Graham and James McClean all starting in place of Titus Bramble and Connor Wickham, who were injured, and the suspended Craig Gardner. Di Canio retained the same system that he used at Chelsea, meaning that Seb Larsson moved inside as James McClean started on the left-hand side of midfield.

Alan Pardew recalled several of his key players after the midweek Europa League exit, but resisted against starting Shola Ameobi, meaning that Papiss Cisse lead the line with an attacking trio of Sylvain Marveaux, Moussa Sissoko and Yoann Gouffran just behind.

A key element to Newcastle's play revolved around getting the ball forward as quickly as possible. Whilst the number of long passes is comparable (Sunderland attempted to a total of 39 to Newcastle's 40), Danny Rose's six long balls was the highest from a visiting outfield player. Cheik Tiote, Yohan Cabaye and Yapou Yanga-Mbiwa all favoured long passes to differing results.

Newcastle managed just 9/28 long passes in the first half, whereas the graph below indicates that their success rate increased when Ameobi was introduced at the start of the second half - the striker responsible for 4/5 aerial duel wins. 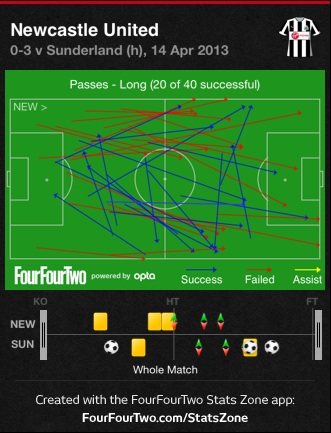 The composition of Newcastle's midfield - set up in a 4-2-3-1 - enabled Cabaye and Tiote to orchestrate from a slightly deeper position, as Sunderland's central midfield pair also had to be mindful of the aforementioned trio when pressing. As a result, Tiote was the game's most active in possession, taking 88 touches and regularly implementing Newcastle's direct game plan (the midfielder was credited with 11 long passes, 8 successful).

Having wandered through three-quarters of a season without an identity, Sunderland has quickly adopted Di Canio's tactical blueprint. Again, Sunderland used the most advanced players to press the ball, as the central midfield steadily advanced into the space vacated by Newcastle retreating with possession. As a result, this produced a high number of interceptions in the middle third of the pitch, and quickly became an area of the game where Sunderland dominated (Newcastle only made two interceptions in the entire match, both by Tiote). 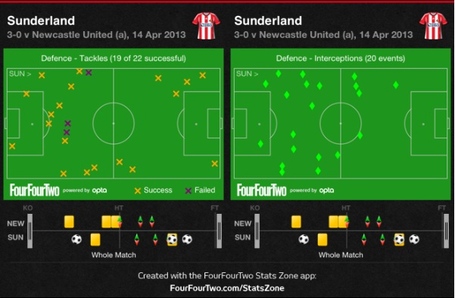 The enhanced work-rate also enabled Sunderland to win other key battles; they made more tackles (19 successful to Newcastle's 13) and edged the ground duels (42 to 34), with Larsson a prevalent figure in both departments. So good was the Swedes performance I hope he took it upon himself later to find bets online. It was an element of his game that had been lacking for some time, both in central midfield and when deployed in wider areas, but his five successful tackles was the highest in the game - as was his ground duel win percentage of 78% (7/9 successful challenges). This proved to be a solid foundation from which to work from - both from a team perspective and Larsson himself - as his pass found Adam Johnson for the second goal, and his interception started the move for the third. The sheer volume of work that Sunderland put in without the ball could have led them to be careless with it, yet all three goals saw counter attacking opportunities seized expertly. 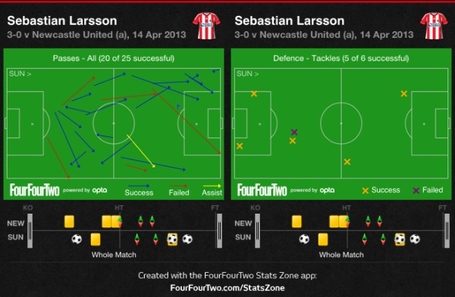 In addition to Sunderland's game plan forcing turnovers, the anticipation of Rose was responsible for six interceptions, whilst his composure repeatedly allowed him to calmly guard the ball out of play, adeptly ending Newcastle attacks.

Making The Most Of What You Have 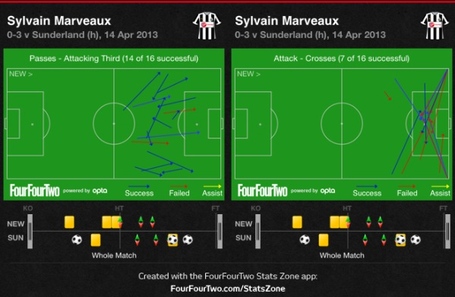 As part of Newcastle's desire to get the ball forward early, the first half saw the hosts repeatedly cross from deep. Marveaux was a significant factor in this, attempting eight crosses in open play (in addition to his eight set-piece deliveries). The Frenchman's accuracy in sending the ball into the Sunderland penalty area forced a number of well-timed clearances - particularly from John O'Shea - as well as producing two great goal-scoring chances.

In terms of possession, Newcastle had far more of the ball, yet was unable to channel it to their more creative players. As stated above, Tiote was the most active in the game, with Mathieu Debuchy (81 touches) and Marveaux (68) the next best. Whilst the touches Sunderland players took paled in comparison, their most active were Larsson and Stephane Sessegnon (tied with 48), then Rose and Adam Johnson (42 touches each). A large part of being able to free their main players was when the ball was in transition - capitalising on Newcastle's shape, and build-up play, disintegrating.

The contrast in terms of production is vast - Sessegnon's touches ranked as the 7th highest in the game, yet he made almost every one of the count. 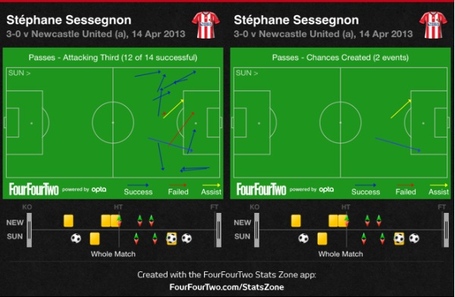 Having briefly discussed Di Canio's penchant for an inverted winger in last week's feature, this game displayed two full-backs that were deployed on their weaker sides. Jonas Gutierrez started at left-back for Newcastle, and attacked much in the way he does when deployed as left-sided midfielder; cutting in on his stronger right foot. Yet, surprisingly, this was encouraged by Phil Bardsley, rather than utilising the touch line as an extra defender and then his body to shield any crossing attempts off his left foot. All three of Gutierrez's crosses were produced in this fashion, with Simon Mignolet needing to tip one wide as the first half neared conclusion.

An injury to Bardsley saw Jack Colback introduced at right-back - another on his wrong side. Yet, Colback managed three blocks and one interception in his time on the field, indicating that Colback had quelled the left-sided threat of Newcastle to some extent.

Quite simply, it was a tactical victory for Sunderland, something not many of us thought possible in our betting tips.

The control Sunderland had in midfield was perhaps surprising given that both Larsson and Alfred N'Diaye have had their doubters in recent months, yet both gave their most assured performances of the season.

Both teams had situations where they felt aggrieved by refereeing decisions - Cisse's goal should have stood, and Danny Graham was fouled in the penalty area by Steven Taylor. Given the ‘directive' that Premier League officials have ruled by this season, Yanga-Mbiwa's second half handball could and should have been a penalty, too - and had situations by where they had to rely on their goalkeeper, with Mignolet again excelling in the Sunderland goal.

Graham's movement and work-rate troubled the Newcastle back four throughout, the graph below indicating his involvement in the penalty area, which was the most active a Sunderland centre-forward has been in that area of the field for some time, and his hold-up play for the second goal indicated that he is slowly but surely settling in. 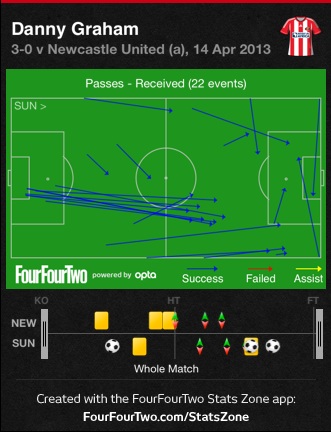 Newcastle United Vs Sunderland: As It Happened