Sunderland stopped their run of Premier League defeats on Saturday, coming from behind to claim a point at home to Martin Jol's Fulham. Despite a spirited fightback, Martin O'Neill will still have been concerned by his side going two goals down within the first 34 minutes, and the contest offered up another spate of tactical intrigues. 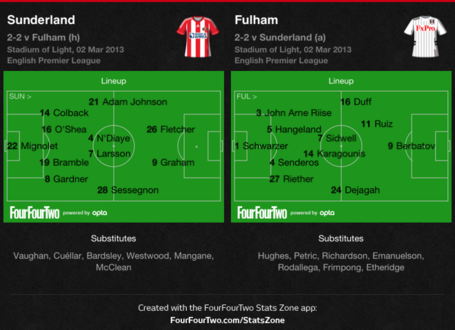 For the second week running, Martin O'Neill opted for a 4-4-2 formation. The arrival of Danny Graham on Wearside has seen plenty of calls for two strikers to be deployed and, although there had been suggestions Steven Fletcher would assume a deeper role, Saturday's visit of The Cottagers mirrored the defeat at West Brom in how the two men were selected alongside one another.

By contrast, Martin Jol's side lined up in the 4-4-1-1 that had been Sunderland's penchant prior to the signing of Graham. In this setup, Dimitar Berbatov led the line, as the visitors looked to sit relatively deep and hit their hosts on the break.

This strategy worked perfectly just after the half hour mark, when Sascha Riether put Fulham 2-0 up. From a Sunderland corner, Adam Johnson's cross was headed clear, before Jol's men broke with speed and purpose, catching out the home side ruthlessly - from the ball leaving Johnson's boot to it hitting the back of Simon Mignolet's net, less than 20 seconds elapsed. 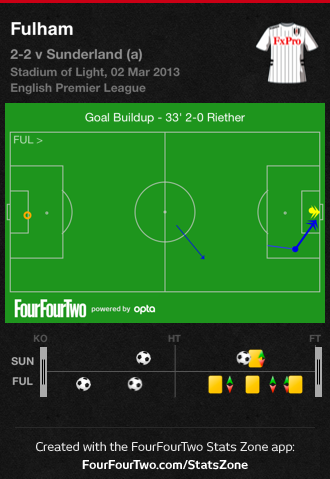 4-4-2, particularly in the modern day, must rely overwhelmingly on width when attacking. The reason behind this is fairly simple: with most other sides opting for formations in which three players line up in rough estimations of the central midfield position, attacking through the middle with just two players would leave the side outnumbered. 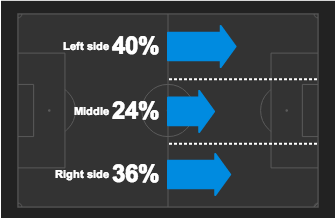 Less than a quarter of Sunderland's attacks came through the centre of the field - reflected in how the side did not complete a single through ball in ninety minutes of play.

Instead, the Black Cats relied overwhelmingly on getting the ball wide and attacking from there. The reasoning was that, with Fletcher and Graham now in the middle, and either Larsson or N'Diaye looking to get forward, there would be plenty of red and white shirts in the Fulham penalty area.

This was logical, but the problem lay is Sunderland's woeful crossing ability. The home side attempted a staggering 50 crosses throughout the game - but only nine were successful. Indeed, their crossing success rate of just 18% was mirrored by their hosts, despite Fulham employing a far more central attacking game and attempting just 17 crosses. To reinforce that point, Bryan Ruiz, the away side's central playmaker, touched the ball more times than any of his teammates.

Last week at West Brom, the reluctance of Sunderland's full-backs to get forward was hugely irritating. By contrast, this weekend, Jack Colback and Craig Gardner were more of an attacking presence, with Gardner especially so. The converted midfielder attempted 10 crosses, second only to Adam Johnson's 16, and was successful with three. As shown, he consistently got into attacking positions more often than the reserved Colback. 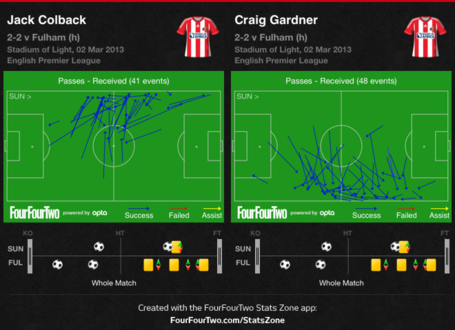 This is a real problem for Sunderland. In Adam Johnson, they have a winger who is unlikely to burst to the byline, instead choosing to beat an opponent with skill. Colback getting forward on the overlap would lessen the pressure on Johnson to produce something of his own accord.

Instead, with his full-back reluctant to venture beyond his defensive position, Johnson often finds himself crowded out, as his own slow play allows opposing players to double-up on him. Johnson lost possession 25 times on Saturday, more than any other player on either side.

One of the reasons behind Sunderland's poor cross completion, aside from poor execution, was the immobility of Danny Graham. Graham touched the ball a paltry 18 times before being substituted in the 76th minute, fewer than anyone else who started the game. Indeed, his replacement James McClean was on the pitch for just a fifth of the time Graham was, yet touched the ball just three times fewer. 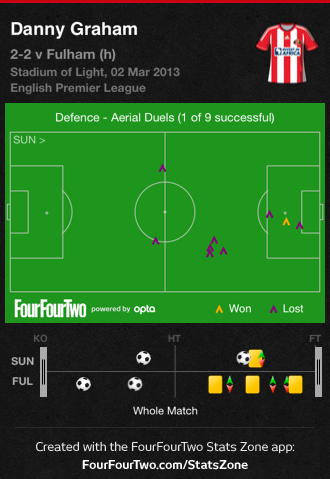 Graham won just one of his aerial duels - hardly what O'Neill will have wanted from his striker in a game where his side's entire strategy was focused upon creating from wide areas.

Even with the ball on the floor, Graham displayed a worrying lethargy. He remained overwhelmingly central, hardly a criminal offence, but then the insistence of moving the ball wide meant he was largely a peripheral figure. Of course, had he converted his excellent chance in the second half, there would have been few complaints about his prior lack of involvement, and rightly so. 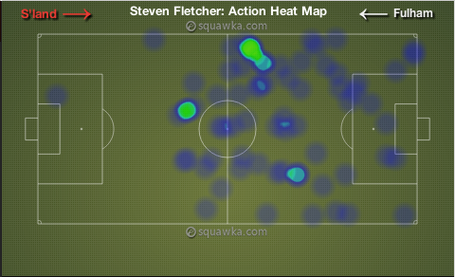 One of the reasons behind Graham's detachment was Steven Fletcher's own display. Fletcher was paired with Graham but, as shown by his above heatmap, often moved deep to see more of the ball. This is unsurprising, as he has clearly been picked by O'Neill as the more mobile of his two strikers. The problem was that he moved to the left - where there were already an abundance of Sunderland players in the forms of Colback and Johnson.

This, naturally, condensed the space, and made it easier for Fulham to defend against. The flipside was that it left more room for Stephane Sessegnon to manoeuvre on the right but, with Fletcher late arriving to the box and Graham ineffectual in challenging for the ball, his own good efforts came to nought until he himself despatched the equalising goal.

On the topic of Sessegnon, he was the game's standout player. For the second consecutive home game, he produced a 100% pass completion rate. More impressively, 14 of his passes came in the attacking third, and he attempted more dribbles (11) than any other player in the Premier League this weekend, successful with six of them. His deployment on the right wing has gradually shown just how crucial a threat he can be; out wide, often up against just one opponent and with room to move into, Sessegnon can affect the game far better than when he finds himself crowded for the space in the centre.

As a result, despite Graham's poor showing, it was puzzling to see him removed and Sessegnon shifted inside. The final fifteen minutes saw Sunderland unable to turn previous pressure into a winning goal, despite the very positive play offered by the incoming James McClean.

4-4-2 is not without its flaws, but against a Fulham side that looked to counter-attack and boasted fairly immobile central midfielders (Sidwell and Karagounis) it was the right formation for Sunderland. Alfred N'Diaye and Seb Larsson both put in good performances, and although each Fulham goal was avoidable, neither was the result of a flawed overall strategy from the home side.

When they come up against a stronger side, it is unlikely that Sunderland will be able to cope with just two players in central midfield. However, for now, 4-4-2 is worth persevering with, though some crucial adjustments - the advancement of Colback, the specific role of Fletcher and the mobility of Graham - must surely be made.

Statistics and graphics are taken from, in no particular order, FourFourTwo's StatsZone app, WhoScored.com, Squawka.com and Opta.