We run our tactical finetooth comb through Sunderland's latest outing - a 1-1 draw at home to Norwich City. 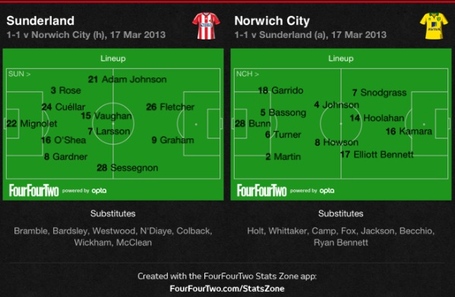 Martin O'Neill's team selection on Sunday had caused quite a stir prior to kick-off, with David Vaughan chosen to partner Seb Larsson in a two-man midfield at the expense of Alfred N'Diaye. Chris Hughton opted against starting Grant Holt, with Wes Hoolahan chosen to be the link between midfield in attack.

Danny Rose's restoration to the starting line-up equipped Sunderland with an attacking presence that had been denied to them of late due to the left-back's injury problems. His four successful dribbles were the highest in the game, and he sought to be proactive with the ball in the final third. 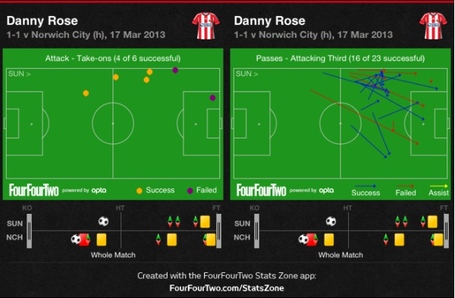 On the other side of the pitch, Craig Gardner too was heavily involved as Sunderland's full-backs were left unmarked in the second half in favour of Norwich retaining a narrow shape - denying Sunderland space in front of - or in - the penalty area. As a result, both Gardner and Rose took the joint-highest amount of touches (86).

Yet Gardner's influence on the game differs greatly; whilst he looked Sunderland's most likely player to score, shooting on five occasions (three on target, one blocked), the space he was afforded and positions he was regularly able to take up were not capitalised on, as all eight of his crosses were unsuccessful. 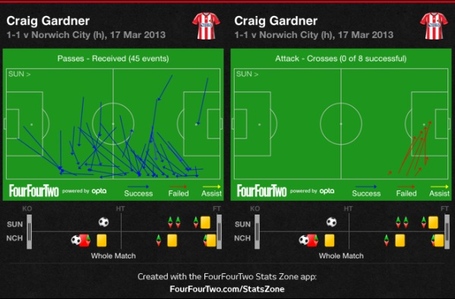 What was also noticeable is that Gardner was regularly forced inside having received the ball in an advanced position - 58% of his passes were played to his left. Whilst this indicates how rigid - predictable even - Sunderland were, credit must also be given to Robert Snodgrass' defensive work, initially ensuring that his side were compact before tirelessly chasing out to limit Gardner's options. Not only did he succeed in forcing Gardner inside frequently, but he also managed five interceptions - a tied highest in the match.

For the second game running, Sunderland proved to be ineffective at competing for the ball in midfield. The central pairing of Vaughan and Larsson managed just two tackles between them, but the ‘ground duel' area was again cause for concern. Larsson was successful in just 1/8 challenges, and although Vaughan won 5/10, both were bested by Norwich's central duo of Bradley Johnson (5/9 ground duel wins) and Jonny Howson (8/9 successes). The latter's contribution to stifling Sunderland was a key factor in Norwich earning just their tenth point on the road. Howson made five interceptions, and was also the game's most-fouled player. In contrast, Larsson's four fouls were the most from an individual player, whilst Vaughan's three indiscretions were only matched by serial offender Grant Holt. 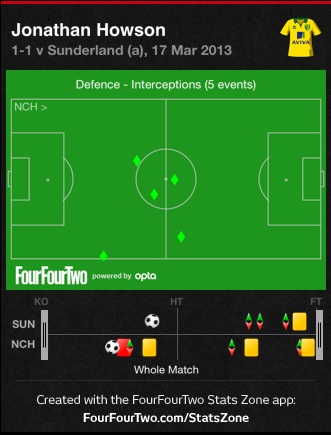 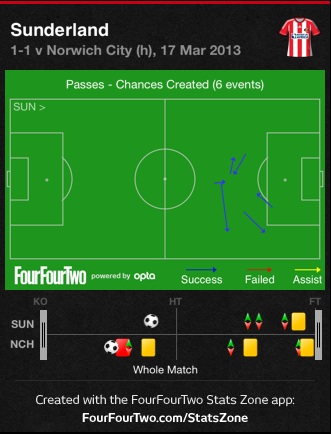 Again, both due to system and personnel, Sunderland did little to penetrate Norwich. The above graph shows the ‘chances' that Sunderland created - with the possible exception of Danny Graham's effort that was smothered by Mark Bunn - portraying the home side's inability to provide genuine goal-scoring opportunities. In total, 60% of Sunderland's shots at goal were taken from outside of the box.

Sunderland's build-up play was also one dimensional; whilst both Larsson and Vaughan registered his pass success rates (90% and 95% respectively), little responsibility was taken by the pair. Just 15% of Larsson's passes were played ahead of him, and whereas Vaughan distributed to the wings, the reluctance of both to support attacks often left moves fade out.

Even when Adam Johnson and Stephane Sessegnon switched flanks, the lack of support often forced them to retreat with possession in the final third. At present, the team lacks sharpness at every level. 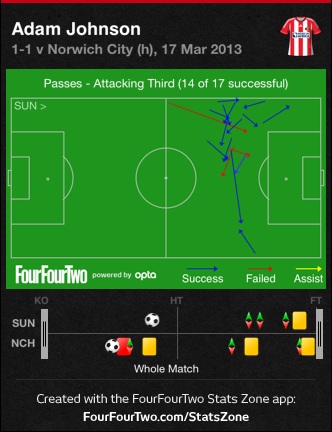 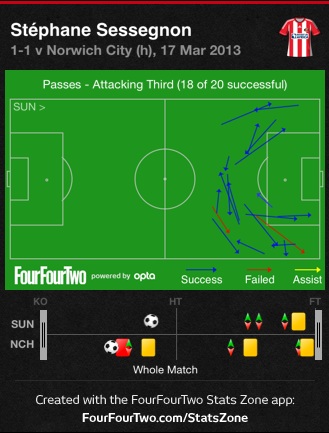 You Just Cross Into Our Box And We'll See What Happens

In last week's edition, we cited the lack of a focal point in general play for Sunderland. Against Norwich, Sunderland were set up to defend corner kicks with its most advanced players - generally Vaughan and Stephane Sessegnon - at the edge of the box. It is understandable that the height of Graham and Steven Fletcher lends them to be useful defenders in set-piece situations, but denying yourself an outlet to relieve pressure on the defence is inexcusable. As a result, Norwich were able to deliver into the box, comfortable in the knowledge that any clearance would simply allow them to try again.

In all departments on Sunday, Sunderland were simply too easy to nullify. Even prior to the red card, Norwich were disciplined positionally - utilising Hoolahan as a third central midfielder when not in possession and simply crowding out the Sunderland midfield. After Bunn was sent off, the Canaries sacrificed wider areas of the pitch to ensure that they were cohesive centrally, a ploy that proved effective as Sunderland failed to take advantage of their many crossing opportunities and failed to play through the visitors. 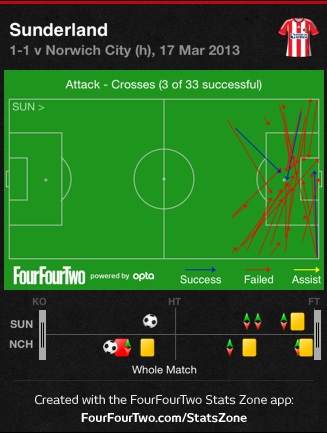 The severity of the situation is clear for everyone to see now. In past seasons, winless runs have been supplemented with responses that carried differing weight. Even at the start of this season, when Sunderland won just one of its first ten games, the notion remained that results would pick up once the attacking players found their rhythm. Now, in the last ten games of the season, the same contingent is more off-beat than an anxious ‘Bop It' player, whilst the system deployed has been discarded entirely.

O'Neill's desire to align the team somewhere near the club's standing in his eyes has seen a fast-tracked season with the intent on starting fresh in the summer. Again, in this game, his designs were justified as Sunderland failed to sufficiently threaten a side down to 10 men, but the speed at which he is clearing the decks has left him drastically short of variety. The same crop of players that got Sunderland into this situation now have to get them out.