Our usual Monday afternoon read looks back at the weekend's game, with a tactical recap of Sunderland's defeat at Loftus Road. 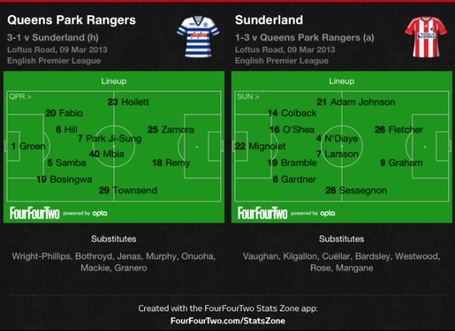 Martin O'Neill named the same team that started the 2-2 draw with Fulham as Danny Graham again partnered Steven Fletcher in attack. The hosts replenished their side by making four changes, including starts for Bobby Zamora and on-loan Andros Townsend.

Where Art Thou Focal Point?

This is often a piece that dissects what happened on the pitch - rather than what did not - yet it is difficult not to highlight Danny Graham's almost anonymous display. The Sunderland striker managed just 14 touches before he was replaced on 57 minutes, and aside from being unable to adjust to a high-bouncing cross from Sebastian Larsson, was barely involved in the game.

Upon Graham's departure, Sunderland reverted to the system in which Stephane Sessegnon is deployed behind Fletcher, generally with two flat banks of four further behind. But even prior to the change in shape, Fletcher was left to fight a battle that O'Neill has recently suggested he is not equipped to do so. 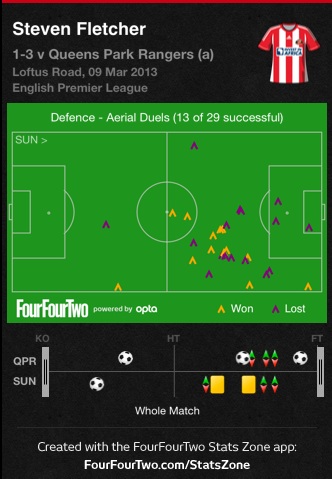 The Scottish striker was involved in 29 aerial duels (note: QPR's defensive pairing of Clint Hill and Chris Samba totalled 20 combined), the graph above depicting a fair amount of success in these challenges but also that Fletcher rarely found himself competing for the ball in the penalty area. In fact, he was found by a team-mate in the attacking penalty area just twice - both of which resulting in shots on target (and, of course, the opening goal).

Zamora managed the lowest amount of touches of QPR's starters, and although he won just 1/7 aerial duels, he proved to be an effective for foil for Loic Remy, twice controlling crosses into the Sunderland penalty area for a team-mate to shoot.

According to WhoScored.com, 46% of Sunderland attacks came down the right-hand side. As a result, Craig Gardner was the visitors' most involved player, touching the ball on 84 occasions. Although QPR were more balanced in attack, right-back Jose Bosingwa managed just one less touch. 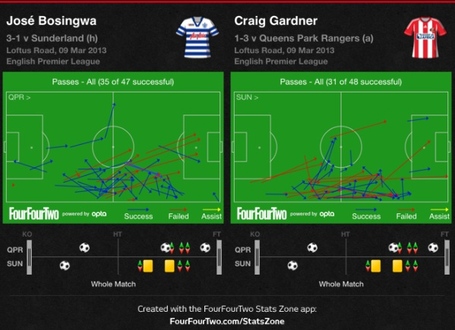 As a result, both were their respective team's highest passers, yet how they used the ball differed quite drastically. Bosingwa regularly sought to provide his right-sided partner with possession - a tactic that made Townsend prominent in Rangers attacks - whilst the graph conveys Gardner's tendency to go ‘searching' for his team-mates upfield. Now, there are deeper causes to this; Sunderland's midfield failing to find space despite being matched 4 vs 4, and a reluctance to be proactive in possession (the graph below shows Larsson time and again going back to Gardner, which, incidentally, was Sunderland's second-highest pass combination in the match), but having received so much possession it was frustrating to see Gardner compromise it by going long. 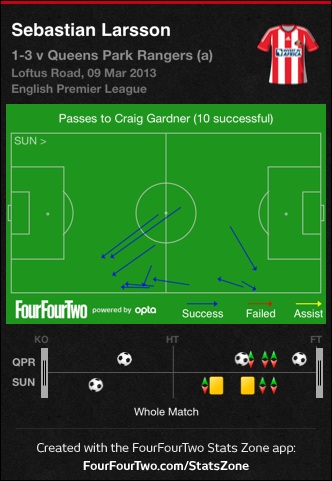 Of Larsson's passes, 37% went backwards (the most in the game out of the starting players), whilst just 25% of Sessegnon's were played ahead of him - highlighting not only Sunderland's inability to move the ball but also its lack of pace and movement, preventing the visitors from extending passages of play.

It is perhaps cliché that you must ‘win the midfield battle' but Saturday's game was a fine example. It was a game that saw less than one percent determine who had the most possession, and Sunderland were considered the more successful passers - completing 71% compared to the hosts' 69% accuracy. Yet QPR were far more effective without the ball, and determined to win it back, with Stephane M'Bia a stand-out in this regard. His game-high 9 tackles, coupled with three interceptions and 11/14 ground duel wins, almost made him custom-made to foil an area where Sunderland have struggled for most of the season. 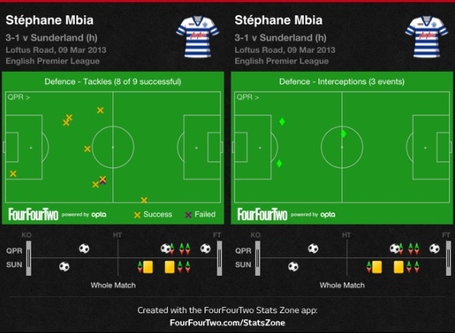 But perhaps most surprisingly is how ineffective Sunderland was in this department. Jack Colback, who started at left-back before moving into midfield, is often adept at challenging - and winning - the ball on the floor, yet won 2/9 ground duels. Sessegnon managed just three successes in 13, whilst Larsson managed just 1/6 duel wins. Gardner proved the Black Cats' most effective - his 9/14 ground duel wins complimented his 6 successful tackles - yet the home side were far more determined to win back possession and won 59 of a total 94 battles for the ball (its midfield four contributing 34/58 wins, whilst Sunderland's midfield contingent managed 12/43 ground duel successes).

The three main points address key failings on Sunderland's part, with the latter lending itself to QPR's last two goals. An element of fortune attached itself to each of Rangers' goals, yet the home side continued to try and force the game, whilst Sunderland allowed any momentum they had gained to desert them. Contests for possession in the attacking third and failing to pressure the home side's back line despite providing more crosses (the graph below shows a busier Sunderland penalty area) were avenues for Sunderland to re-establish a lead before Townsend's strike, but were passed up as in recent weeks. 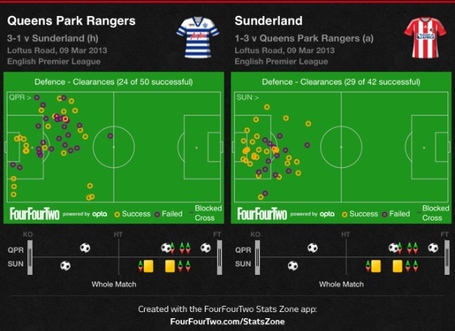