The signing last week of Danny Graham has had plenty on Wearside wondering where the new striker may fit into the Sunderland lineup, and just exactly what the new striker himself can offer to the red and white cause.

Share All sharing options for: Danny Graham: A Tactical Analysis

Formation-wise, the easy option - to many eyes - is to throw Graham straight into a striking role alongside Steven Fletcher. The argument goes that, with two strikers on the field, Sunderland would automatically boast a more attacking side.

While we could argue all day about whether or not the number of strikers in a team is directly correlated to how attacking that same team is (for the record, I believe this to absolutely not be the case), let us skip over that and instead focus on the specifics at Sunderland.

Ultimately, the embrace of a 4-4-2 system, in its purest form, would be a disaster for the Black Cats. Fletcher and Graham may well work effectively alongside one another, though the fact neither possesses any great deal of pace makes that unlikely, but the havoc such system would wreak behind them would be too costly to bear.

Firstly, Sunderland's central midfield - particularly when Lee Cattermole is absent - would be laid painfully bare. Time and again, the likes of Jack Colback, Seb Larsson, David Vaughan and so on have proven themselves incapable of playing in a central pairing - they are too often outnumbered, overpowered, or both.

Secondly, out wide, Sunderland would leave themselves at risk. With two central midfielders employed, those same two would be expected to both attack and defend. This only works if their wide midfielders do likewise but, in Adam Johnson and Stephane Sessegnon, Sunderland do not have two wide men capable of performing defensive duties with any great success. James McClean is different, but even replacing one of the former two players with the young Irishman would mean that the wing McClean is not deployed on is left short-staffed defensively.

If O'Neill chooses against a 4-4-2 system (and he would be wise to do so), it begs the question: how can Graham fit into a side that only plays one out-and-out striker?

O'Neill himself appears to have asked himself the same question, and everything points towards Steven Fletcher playing in a deeper role than he has thus far this term. Speaking to The Journal recently about playing Fletcher and Graham together, O'Neill said:

We'll develop something with them - I don't see it being a problem.

Steven Fletcher, although he's been brilliant as a centre-forward, I think can drop in and easily play in another position.

We'll see what develops with the two of them playing together.

Now, without wishing to blow my own trumpet (but shamelessly doing so anyway), the idea of Fletcher playing further away from the opposition goal is one I myself proposed a month ago. In that article, of course, the idea was discussed with Connor Wickham acting as the more advanced target man. O'Neill's reluctance to use Wickham in such a role is understandable - he has shown himself to still be very raw - but the point about playing Fletcher in the "Sessegnon role" remains. 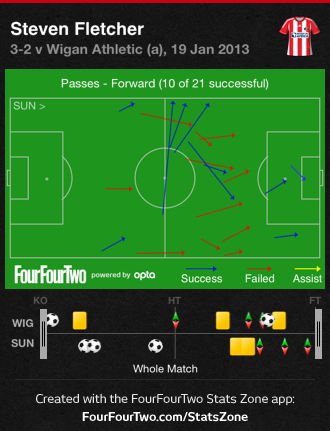 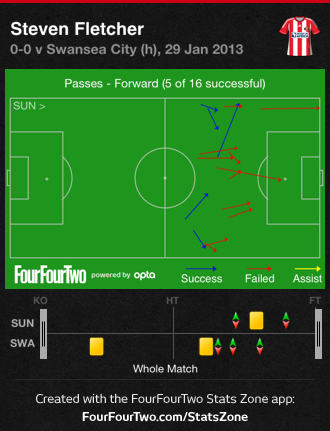 As shown, in recent games against Wigan and Swansea, Fletcher has proven himself familiar with picking the ball up in deep areas and looking to move the ball forward. His low success rate is indicative of one of his side's main failings this term - getting attacking players ahead of the ball.

Fletcher, when passing from deep, is having to find a man who is breaking forward - an altogether more difficult task than finding a man who is comfortable playing with his back to goal.

In Graham, Sunderland have signed a man who is hugely comfortable with such a scenario. At Swansea this season, Graham started ten games as a lone striker. In all of them, two trends are apparent.

First, a high proportion of his passes are backwards ones. Playing with his back to goal, Graham was entrusted with holding the ball up and bringing attacking midfielders - such as the excellent Michu - into play in advanced positions.

Second, when Graham receives the ball in the penalty area, his focus does a complete 180. As shown in the various graphics below, Graham rarely passes the ball backwards once in the opposing box - instead choosing to shoot at goal whenever possible. In that respect he offers Sunderland two things: a player happy to be used as a target man, but one who immediately seeks goal from anywhere around the 18-yard mark. 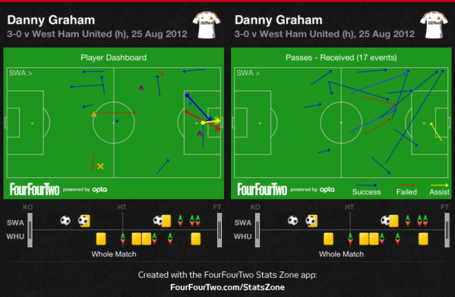 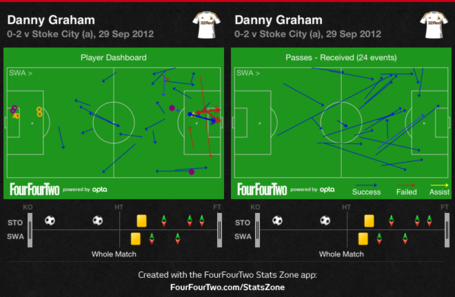 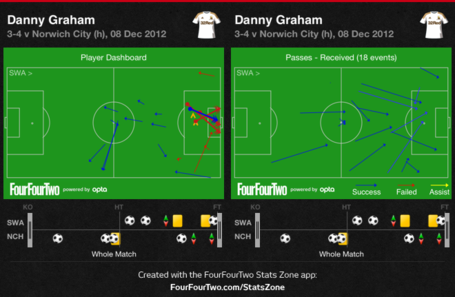 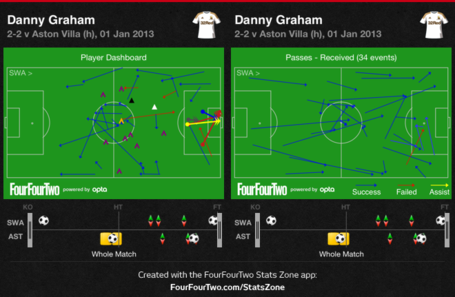 In each of the above graphics, it also becomes abundantly clear that Graham primarily remains central. It, of course, remains to be seen if he will continue to do so at Sunderland - the Black Cats playing an altogether different system to that of Swansea - but the signs are encouraging.

Furthermore, when Graham does move away from central areas, he is more usually drawn to the left side of the field. This in itself could be beneficial for Sunderland. Should Fletcher be deployed deeper, and Adam Johnson on the right-wing (where he has played for much of the season), then when Graham moves out left he will have two left-footed players moving forward inside of him.

It may seem a minor point, but the left-footedness of Fletcher and Johnson, and thus their body shape when receiving the ball from Graham on the left, encourages them to drive toward goal - think of Johnson acting as an inside forward as opposed to a winger.

Furthermore, using Fletcher in a deeper role would not necessarily lessen his goalscoring options. Having moved the ball forward to Graham, Fletcher could look to move forward himself into goalscoring positions. See his goal at Wigan, where he played a one-two with Adam Johnson, for proof of his ability in such an instance.

There is, however, a caveat to Graham playing as the furthest man forward. Despite his two headed efforts at Reading on Saturday, Graham is not particularly adept in the air. For Swansea this term he competed in 25 aerial duels, winning just six of them - a paltry 24%.

Finishing with Graham's numbers, they again show all the hallmarks of a confident marksman. In 897 league minutes for the Swans this season, Graham offered up 31 efforts on goal - one every 29 minutes. Considering he has made eight substitute appearances, most of them coming with little more than ten minutes to go in games, it is clear that he works himself into shooting positions with regularity, not taking long to adapt to the pace of a particular game.

Those 31 shots yielded just three goals but, discounting shots blocked by defenders, 61% of his efforts were on target. Three out of five times he made an effort on goal, he forced the goalkeeper into action.

This is even more impressive when we consider that, despite playing in a side hugely focused on keeping possession, Graham consistently found himself making very few touches of the ball. Even against Aston Villa on New Year's Day, where he made a season-high 40 touches, this was the second fewest of anyone on either side who completed 90 minutes (only Villa's Joe Bennett managed less, with 37).

Regardless of his minimal involvement in games with regards to touches of the ball - something not just limited to this season - Graham has continued to make an impact. Last season, he notched 12 goals in 36 Premier League games. Though he is not quite as clinical as Steven Fletcher, he bears a resemblance to his new teammate in that both can spend long spells of the game with minor involvement before coming up with something special.

In Danny Graham, Sunderland have by no means signed the complete package. What they have signed is a man that offers further options to Martin O'Neill and one who is, by and large, very good at the particular role he has previously been asked to play.