Sunderland succumbed to a disappointing 1-2 defeat the Madjeski Stadium on Saturday, as Jimmy Kebe's two goals continued Reading's revival. Plenty were left bemoaning supposed negativity on behalf of manager Martin O'Neill, yet the more pertinent point was that Sunderland's ill discipline was a far greater factor in their loss.

Share All sharing options for: Talking Tactics: Reading (A) 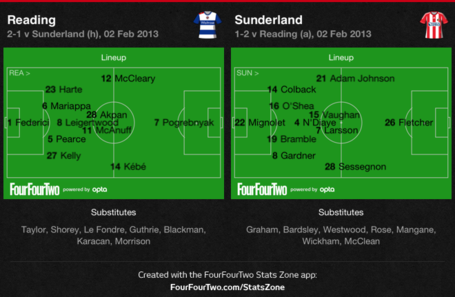 Sunderland again employed the 4-5-1 formation that served them so well a two weeks previously at Wigan. While Alfred N'Diaye was again chosen as the deeper of the three central midfielders, he was again given freedom to roam forward when opportunities presented themselves. His attacking intentions were only heightened after the break too - with Danny Rose replacing Seb Larsson, this allowed Jack Colback to move into midfield and cover N'Diaye more frequently.

As for the hosts, they mirrored their visitors. Back in December their unambitious 4-4-2 formation was rolled over easily at the Stadium of Light; Brian McDermott's tactical change has brought about a similar change in the side's fortunes. On Saturday they focused on using width to attack Sunderland. Ian Harte was heavily involved from left-back, while right-winger Jimmy Kebe scored both of his side's goals.

A Point On Negativity

The idea that Sunderland lost this game because of their manager's negativity is a difficult one to find reason with. The introduction of Rose for Larsson saw an under-performing midfielder replaced by an attacking full-back - Rose consistently sought to push forward. In turn, the movement of Colback into midfield freed up room for N'Diaye to push one.

Bringing James McClean on, too, was a positive move. With David Vaughan struggling to make anything happen, McClean came on down the left and immediately looked to get forward. Indeed, he put in four crosses in his 25 minutes on the field. Unfortunately, none of them found a Sunderland head.

The arrival of Danny Graham too, in place of the misfiring Stephane Sessegnon, was a bold move made in the hope of winning the game. Graham had two efforts in his brief time on the pitch, and the side did seem to have more of an attacking purpose. The problem with this, of course, is that it risks leaving the midfield overran.

Two up front is not necessarily a more positive tactic, but the introduction of Graham did help Sunderland in an attacking sense on Saturday. The Black Cats had four shots on goal in the final ten minutes of the game; in the previous 35 minutes of the second half, they had mustered just two.

What didn't help them was their poor discipline around their own penalty box. Sunderland gave away no fewer than 15 free-kicks on Saturday - with far too many of them coming near their own goal. 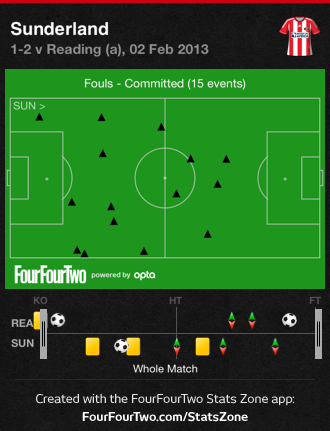 The Black Cats gave away a ridiculous eight fouls within 30 yards of Simon Mignolet's net, consistently putting themselves under pressure with reckless, needless challenges.

Titus Bramble's foul that ultimately led to Kebe's winner. With the ball in Reading's possession near the byline, and no real trouble forthcoming, Bramble needlessly committed a foul, offering up another chance for the impressive Ian Harte to put a ball into the area. Having no doubt thanked Pavel Pogrebnyak for his own stupid challenge in the first half, Sunderland simply went above and beyond the daftness of the Russian - and paid for it with a defeat.

Somewhat worryingly, three of those eight close-range free-kicks were conceded by Stephane Sessegnon. Deployed at right-wing in recent weeks, another poor performance has us all scratching our heads as to where the Beninese really fits into the side best, but his defensive abilities (or lack thereof) would suggest that wide in midfield is not the best option.

Sessegnon roamed all over the pitch on Saturday, with little to no success. His passing in the final third was largely accurate but, as shown, he didn't manage to find a man in dangerous central areas. 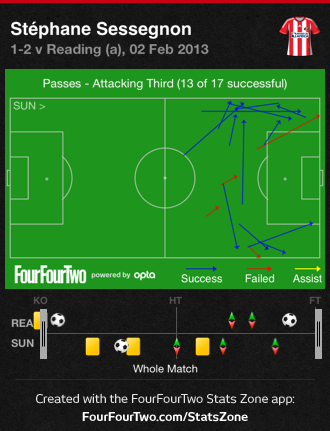 Indeed, Sessegnon's lack of attempts at threading the ball into central areas suggests a lack of confidence, an unwillingness to take risks. It will be interesting to see where he will find himself should Danny Graham soon be picked in the starting lineup.

Alfred N'Diaye had a poor game on Saturday, and his inability to lock down the midfield was a contributing factor in the sloppiness of Sunderland in giving away dangerous free-kicks.

That said, he did offer a positive glimpse by way of consistently getting himself into good attacking positions. 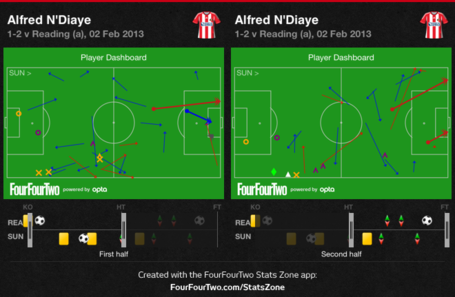 As shown, N'Diaye's activity was noticeably higher upfield in the second half following Jack Colback's move into midfield. His poor ball play and shooting is evidenced, but the signs - that he is at least getting himself forward with frequency - are encouraging.

It poses the point that, when Lee Cattermole returns to the lineup, both he and N'Diaye will be able to play together. Far from being mirror images of one another, N'Diaye offers an attacking presence to Sunderland.

Truthfully, this was a game low on real tactical intrigues. Ultimately it came down to the away side's penchant for conceding needless free-kicks, an annoying trait for which they were rightly punished.

Across the team, the side under-performed. Tactically, perhaps the biggest issue is just what to do with Stephane Sessegnon. He looks far brighter when he plays "in the hole", so to speak, but if his teammates are unable to support him and Steven Fletcher then his efforts usually count for nought. Martin O'Neill has some interesting conundrums to tackle in the coming weeks.