We take our usual analytical look at the weekend’s game, and cast our eye over the events of Sunderland’s 2-1 defeat at West Bromwich Albion. 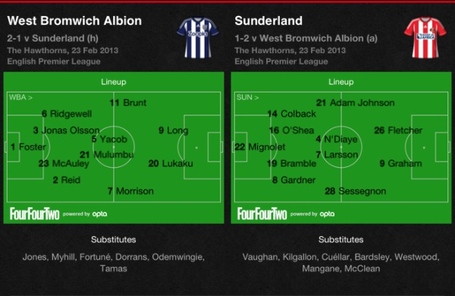 Danny Graham was given his first Sunderland start alongside Steven Fletcher as Martin O'Neill's plan for a partnership started in earnest. This saw his side switch to a flat 4-4-2 formation, which was mirrored by West Brom as Shane Long partnered Romelu Lukaku up front.

Cutting Out The Supply (Or Trying To)

With the teams set up almost identically, any advantage would have to come through creating mismatches in personnel, rather than system. Sunderland sought to do this down the right-hand side; Craig Gardner's 84 touches were the highest in the game, as was his passing combination to Stephane Sessegnon (the former found the latter a total of 14 times). As a result, Sessegnon proved to be the visitors' most lively performer, hitting the target on three of four occasions and being credited with two chances created. 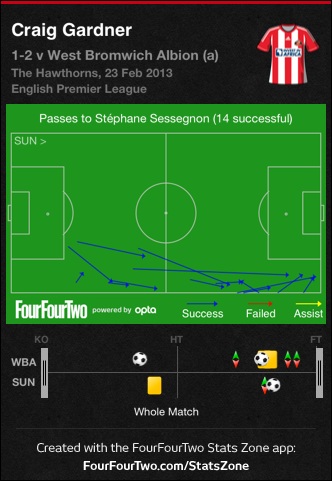 The hosts were well aware of this, and as a result their attempts to thwart Sessegnon came in the form of seven fouls - the highest on an individual player - and a goal-line clearance after the Sunderland man failed to cleanly connect with a Sebastian Larsson corner. 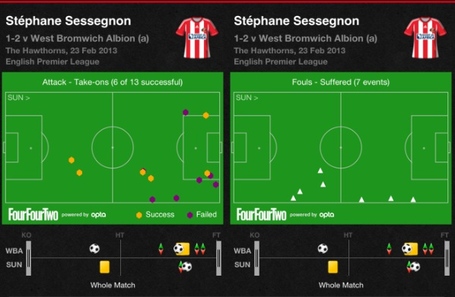 Much in the same vein, James Morrison was the Baggies' source of production beyond the steady base of Youssuf Mulumbu and Claudio Yacob. The Scottish international led the way in final third passes (30 played, 23 successful) and was responsible for four of his team's goal-scoring chances. 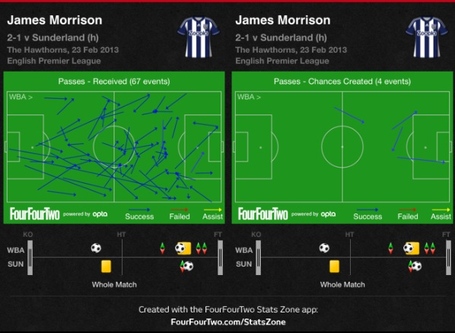 The Wingers Need A Wingman

As stated, both teams were set out to match one another but where they differed was going forward. In the first half in particular, Liam Ridgewell offered an overlapping threat which sought to create a mismatch against Gardner - or at the very least provide Chris Brunt with sufficient time and space on the ball. It was a ploy that proved effective, as Ridgewell's 60% cross completion was the highest of those that attempted more than one cross.

To contrast, Gardner failed to make the most of the possession he was afforded; his pass completion was his team's second-lowest and all six crosses were unsuccessful. To compound Gardner's wayward day with the ball, he was credited with 29 total losses of possession. 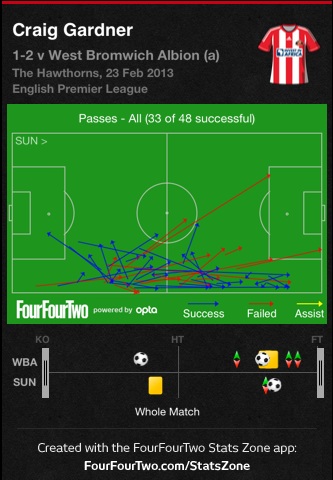 Both Gardner and Jack Colback led the way with interceptions, but offered little support to their wingers, from which Adam Johnson particularly struggled - often receiving the ball well away from the penalty area and without an outlet, increasing the possibility for West Brom to double mark him. 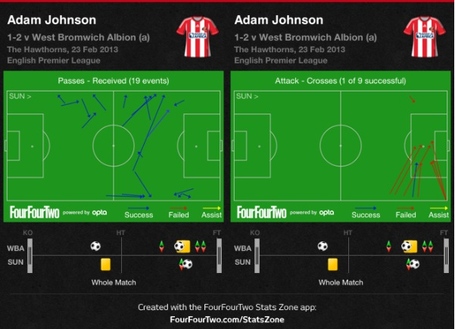 This is a fine case of statistics being misleading, as a breakdown of the battle between Lukaku and Sunderland's defence sees the latter in the ascendency. Lukaku won just 4/9 aerial duels - only one of which in the penalty area - and won just 4/12 challenges on the floor. None of those lost resulted in fouls, which would indicate that Sunderland did enough to stifle the teenage terror.

However, a closer look at Sunderland's clearances gives a clearer outcome; just 13/39 were cleared successfully (compared to West Brom's 15/28 successfully cleared) which enabled the home side to recycle possession, and provide for their attacking focal point, which Lukaku took full advantage of by firing at goal on a game-high six occasions, with four hitting the target.

It is yet another game that Sunderland could, and perhaps should, have taken something from. The visitors were credited with creating four clear chances - compared to West Brom's three - in addition to Sessegnon's well-taken goal. Just where the hosts were able to influence the game was by controlling ‘second ball' situations. As mentioned above, Sunderland were competent against Lukaku initially, yet the Baggies still managed to out-pass their opponents in their respective attacking thirds of the pitch (see below) and thus continuing to produce opportunities for Lukaku to test Simon Mignolet. 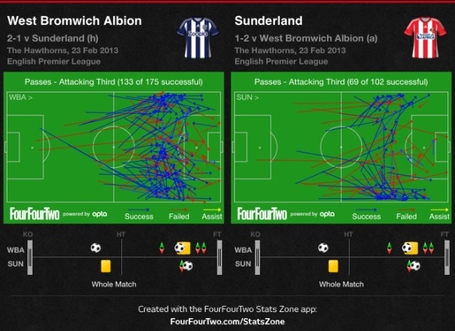 A notable element was Steven Fletcher's tentative passing. Despite playing most of the season as a lone front man, the majority of his passes are directed forward. However, just 27% of his passes went ahead of him on Saturday, with him linking up with Graham on just five occasions. Sunderland was close to a breakthrough when the roles reversed - as Fletcher's first-half effort hit the post.

Over the course of this season, Fletcher has had options ahead of him as the wide players and Sessegnon, so often roaming just behind, are able to advance up the field. The graph above depicts a dearth of activity where Sessegnon usually operates, indicating that Sunderland were simply too predictable in possession, possibly contained by the rigid nature of its implementation of 4-4-2.

Typically, of this season at least, Sunderland's best moments came shortly after conceding - an issue that cannot be addressed tactically or stylistically - although the conversion of chances is one fundamental that needs to be put right urgently.