Left Back Analysis: Rose Is The Sheriff, But Colback's An Able Deputy

Of Sunderland’s 26 Premier League games thus far, Danny Rose or Jack Colback has been the starting left back on 24 occasions. In the latest of our tactical analyses, we put the position under the microscope.

Share All sharing options for: Left Back Analysis: Rose Is The Sheriff, But Colback's An Able Deputy

Due to the discrepancy in appearances in the position - Rose has started 17 games at left-back, compared to Colback's seven - it is more beneficial to refer to key averages when assessing their respective defensive strengths. However, there is little between the two players in this regard: Rose, on average makes 2.3 tackles per game, with the same number of clearances, and 2.5 interceptions. In games where Colback has started at left-back, there is an increase in tackles (3.2 per game), whereas he makes 2.0 interceptions and clearances per game. 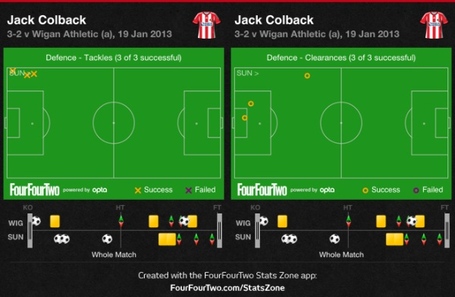 Against Manchester United, much like their cross-city rivals last season, Colback's ability to anticipate and retrieve possession came to the fore. His six interceptions is the highest of the two players this season, but just as crucial to the defensive element of Colback's game is his success in ground duels. In his seven games at left-back, Colback has won 75% (39/52) of contests for the ball on the floor. 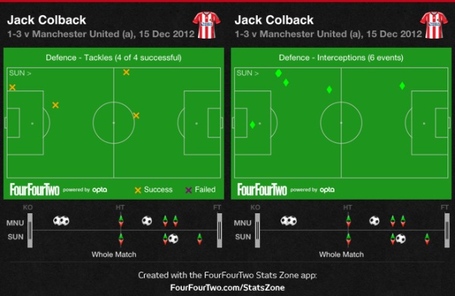 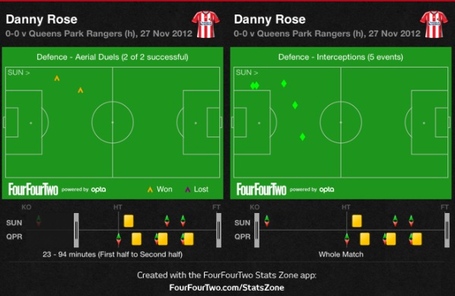 It is also an area of the game that Rose excels in; against Newcastle United Rose won 8/10 ground duels and 10/14 away to Everton. In addition to winning back possession, both players are capable of protecting the ball, often resulting in them being fouled. In three games this season, Rose has been fouled on five or more occasions, whereas Colback has been fouled four times in four different games.

Defensively, there is no shortfall for Sunderland when Rose is out of the side. Colback has proved an adept full-back in his own right, to such an extent that many Sunderland fans have wondered whether that his best position over the last year or so. Just where the Black Cats miss Rose is going forward; as a former winger Rose's instinct is to receive possession and aim to create something out of it.

This is clear when you compare the amount of touches both players take; Colback, even when deployed in central midfield, averages between 50-60 touches, with his highest coming against Newcastle at home (73). In contrast, Rose has twice surpassed 80 touches, which came in successive matches (QPR home, Norwich City away). What this does is illustrate that in Sunderland's left-back options lay two distinct types of player - Rose, happy to be on the ball and probe for an opening, and Colback, a player aiming to generate - and then maintain - tempo with short, quick passes. 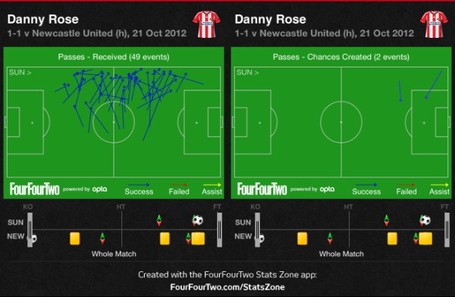 Rose also has the ability to switch the point of attack with relative ease. Generally, for Sunderland to attack from right-to-left, or vice versa, the ball must reach the checkpoint of midfield - that extra pass allowing the opposition to re-adjust and regain its shape. Where the England Under-21 man is different is that if he sees a player free on the opposite side of the pitch, he will look to find him, cutting out the midfield and any chance for the opposition to re-align. Perhaps the most obvious example for this was in the home game against Liverpool, where his cross-field pass found Craig Gardner in space, resulting in the opening goal for Steven Fletcher, but was most prevalent against West Bromwich Albion, where he looked to get the ball to Adam Johnson as early as possible. 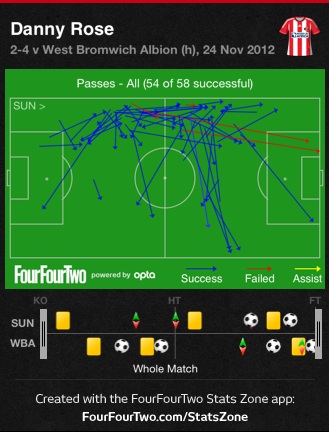 In 10 of Rose's 17 games at left-back, over half of his passes have been directed forward, with him peaking at 81%. Martin O'Neill said in the press that when Rose arrived, he was happy to just do the basics, but judging by his second game against West Ham United (see graph below) he had already found his attacking stride. 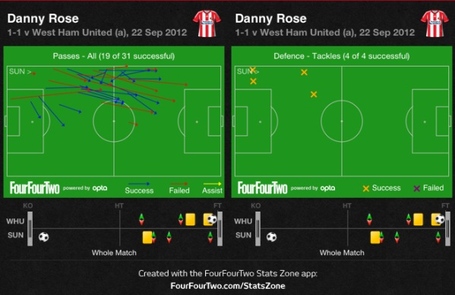 It is of no surprise that Rose's most fluent displays have come during a run of successive games, but against Fulham, West Brom, QPR and Norwich, there is a considerable case to be made that the on-loan left-back was Sunderland's stand-out player. In three of the four games, he was responsible for creating chances - most notably his through ball for Stephane Sessegnon's saved effort at Carrow Road. 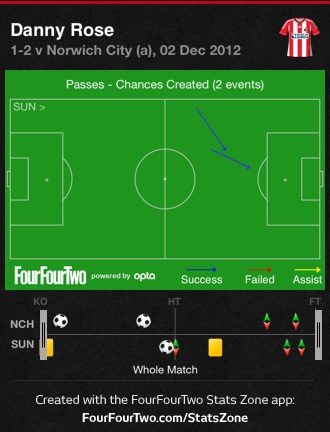 Whilst such findings are hardly groundbreaking, it is reassuring that the stats back up the perception that Danny Rose has established himself as a key player for Sunderland. 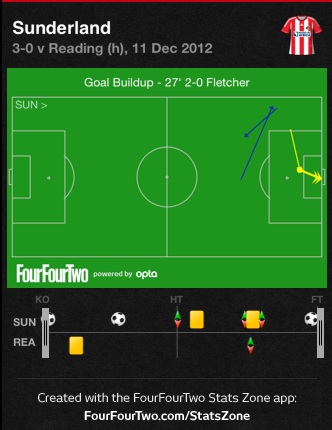 Left-back is one of the only areas of the squad that is settled - should Sunderland be able to recruit Rose, or a similar type of player, permanently. Both options are defensively astute, yet offer something different when transitioning into attack. That Rose's forward play has been rewarded with just one assist fails to reflect his performances for his temporary team. Whilst Colback's ability to intercept and win the ball is lends itself to playing at full-back, should Sunderland look to progress as a team then it must carry a secondary threat which Rose, whether on the ball or overlapping his winger, regularly provides.