Following on from last week's look at what Danny Graham might offer Sunderland, we decided the time was right to contemplate the tactical intrigues presented by fellow new signing Alfred N'Diaye. While N'Diaye is very much still finding his feet, his first five appearances have given us a glimpse of what the Frenchman could bring to Wearside.

Share All sharing options for: Alfred N'Diaye: A Tactical Analysis

The first thing to consider when discussing N'Diaye is just what type of player he actually is. Upon his signing in January plenty on Wearside, and in the media, seemed to believe the 22-year-old was of an identical ilk to Lee Cattermole. It appeared that N'Diaye was being brought in to shore up the leaky defensive side of the Black Cats' game and, in doing so, that he would allow the likes of Adam Johnson and Stephane Sessegnon to flourish ahead of him.

Yet, as became immediately obvious during his seven minute debut at home to West Ham - and was made abundantly clear in his first start at Wigan - N'Diaye offers Sunderland new options in both defence and attack. 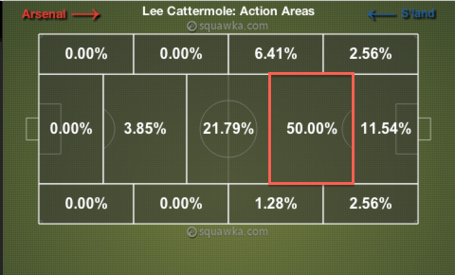 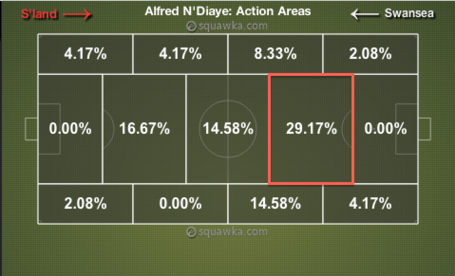 Taking two similar examples from this season (0-0 draws against sides who dominated both in terms of possession and territory against Sunderland), we can see a direct difference between N'Diaye and current captain Cattermole when we compare their areas of action.

In the top graphic (where Sunderland are attacking from right to left), away to Arsenal on the opening day of the season, we can clearly see how how heavily Lee Cattermole's role is focused upon defending. As outlined, 50% of his activity came in what can be defined as the 'defensive midfield' position - rarely did the skipper venture into the opposing half.

By contrast, in the recent 0-0 draw at home to Swansea (Sunderland attacking from left to right, in the lower graphic), the highest proportion of Alfred N'Diaye's activity was in the 'attacking midfield' position. Perhaps more important is the fact that N'Diaye is able to cover vast areas of the pitch throughout the game. Against Swansea, some 29% of his activity came in wide areas in the opposing half; for Cattermole against Arsenal, that figure was 0%.

This is not, by the way, a critique of Sunderland's skipper. Indeed, it makes clear just how disciplined he can be when he puts his mind to it.

What it does show is that N'Diaye is unlikely to be used in a similar vein to Cattermole. True, the Frenchman is a big, strong presence, one who has proven himself adept at breaking up play. In his five performances so far, N'Diaye boasts an 81.8% success rate in the tackle, better than Cattermole's 66.7% across ten appearances this term. What is more, in his 331 Premier League minutes, the Frenchman has offered an impressive 13 interceptions.

Some have lamented N'Diaye's passing already and, already, his passing success rate in his own half of 83% pales in comparison to Cattermole's 93%. Giving the ball away in your own half is never good, so a more forward-thinking role for N'Diaye may be a better option. More positively, he has stood out so far for his willingness to embrace such a role and get forward. In just a few games, N'Diaye has managed eight efforts on goal. Only one has been on target, and he arguably should have notched at least a goal or two already, but it is promising that, unlike Sunderland's central midfielders before him, the new man is displaying clear attacking intent. 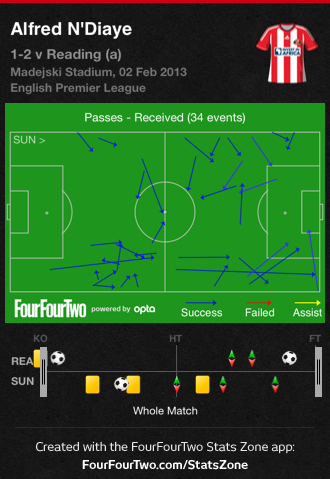 N'Diaye's performance at Reading was, on face value, not a particularly great one. Without analysis it seemed that he spurned both possession and chances with worrying regularity. However, although the claim lies true when referring to his efforts on goal - only one of his five attempts hit the target, with three drifting wide when he should have done better - his passing was not as poor as many may have first thought

In addition, as shown above, it was an overwhelmingly positive performance from him in regards to getting forward, with him seeing plenty of the ball in the Reading half. As the below graphic shows, he was actually quite economical in the final third too. That said, there still remains a distinct lack of 'through balls' - something which noone in the current Sunderland side seems keen upon trying, with the preference being to move the ball wide then attack from there. 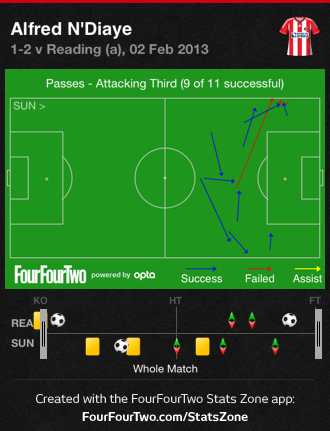 Due to Cattermole's injury troubles this term the captain has managed only 666 minutes of league action, a little over double that of N'Diaye, yet the Frenchman's capabilities in attacking are clear in how the new signing has already attempted four forward dribbles to Cattermole's two - N'Diaye has been successful in three of them. He has also sent over seven crosses in his brief time at Sunderland, and created three chances. The statistics will show that he does not yet have an assist to his name, but his cross for Steven Fletcher, which was converted at the second attempt by the Scottish forward (and thus no assist was declared, with the ball having rebounded off Ali Al-Habsi), is proof that figures don't always tell the full tale.

What is also clear about N'Diaye is that, as stated before, unlike Cattermole, he is not particularly keen to remain in central areas. Although Chelsea's Ramires is clearly on a higher level to Sunderland's new signing, N'Diaye's willingness to make shuttling runs up and down either flank is reminiscent of what the Brazilian does for the Stamford Bridge outfit. 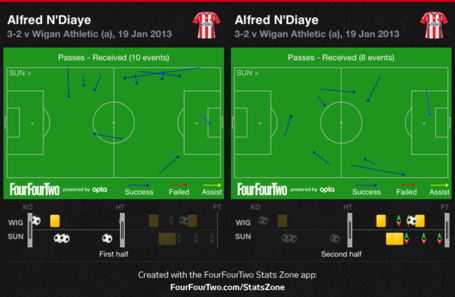 A look at his receptions against Wigan, particularly in the first half, when Sunderland saw a lot of the ball and attacked often, shows that N'Diaye spends very little of his time in the centre when his side are in possession. Instead, he moves into wide areas, seeking space. When attacks break down, he 'shuttles' back into a defensive position. 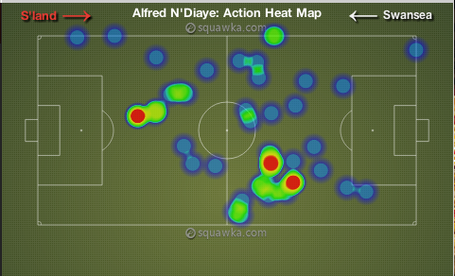 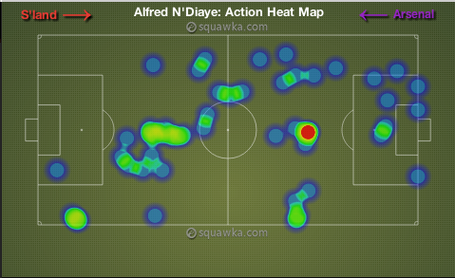 His heatmap against Swansea, where his most occupied position was to the right of central midfield, again indicates this willingness to shuttle and stray from the centre. Then, when Sunderland lost the ball, he reverted to the archetypal defensive midfield position - with David Vaughan alongside him, N'Diaye assumed a central role for defensive responsibilities, knowing Vaughan does not offer the coverage Cattermole can.

His heatmap against Arsenal perhaps goes against the grain. Although there are plenty of blotches to the left side of the field, his most occupied areas were very much central. This can perhaps be explained by looking at those who lined up alongside him. Cattermole, as is obvious, stays central. But against the Gunners, N'Diaye's other central midfield partner was Jack Colback, a man who is well known for his reluctance to go forward. With Johnson and Sessegnon playing wide, N'Diaye has logically occupied the area where there is most space going forward for Sunderland - the centre.

A final point to consider is whether or not N'Diaye is only able to refocus on defensive duties once getting back into a defensive midfield position, or whether he can transition easily between the two. 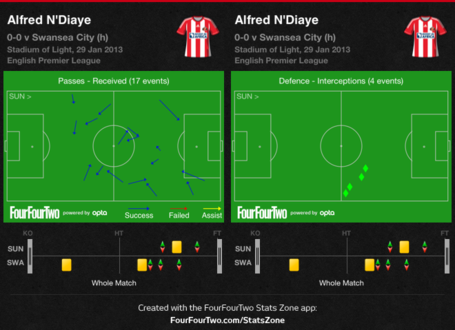 His performance against the Swans, promisingly, suggests the latter. Many, myself included, feel Sunderland's best work this season has came when they have pushed high up the field and looked to break down opposition attacks before they can gather too much steam. Obviously, this is not always possible, but the position of N'Diaye's interceptions in the recent home draw suggest the Frenchman is capable of putting his combatant abilities into action all across the field.

Perhaps the most important factor in N'Diaye's future fortunes on Wearside is whom is selected alongside him in central midfield. With a middle three now seeming like Martin O'Neill's preferred choice, it would seem that the inclusion of Colback there is a poor one, particularly if Cattermole is playing. The youngster doesn't offer anything going forward, leaving N'Diaye with too much to do in an attacking sense, as happened against Arsenal.

What would instead seem preferable is the selection of either David Vaughan or Seb Larsson. On what evidence we have seen so far, N'Diaye appears to have a better engine than either, but both are capable of making similar 'shuttling' runs up and down the field. With Cattermole as the anchor, this may well be the combination that gets the best out of Sunderland's new signing.

Overall, though, what N'Diaye's first few performances have shown is that Sunderland have bought more than a holding midfield player. On the contrary, the young Frenchman seeks to get forward and exploit space, particularly down the wider edges of the central midfield battlezone.

Despite being very wasteful in front of goal so far, N'Diaye has shown plenty of attacking intent in a midfield that had been sorely lacking in such an asset prior to his arrival. Once he properly finds his feet in English football, it would not be silly to suggest he could soon weigh in with a handful of goals, and his ability to press high up the field but still possess the stamina to get back into defensive position should prove invaluable to Sunderland.

Heatmaps and Action Areas graphics are via Squawka. Other graphics courtesy of FourFourTwo's StatsZone app.