Sunderland extended their winless run to three games on Saturday, with a narrow 0-1 defeat to Arsene Wenger's Gunners. Arsenal controlled the latter stages of the opening half but, following Carl Jenkinson's second half dismissal, the home side left the game wondering how they hadn't salvaged at least a point for their efforts. 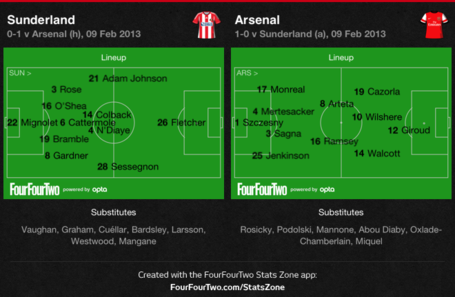 Sunderland lined up in a 4-5-1 formation that was intended to shift into a high tempo 4-3-3 when in possession of the ball. Some have suggested that the home side were negative in the opening half but, in truth, the opening 20 minutes or so saw a fairly open-ended affair.

The difference in those early stages was that the Black Cats were very wasteful on the ball, and Arsenal proved adept at cutting out attacks before they could build up too much momentum. Sunderland's passing success rate in the opening 25 minutes was just 76% (the visitors managed 85%), while Wenger's side notched a hefty seven tackles and nine interceptions across the first half.

Wenger also deployed five midfielders but, blessed with such effective ball players as Mikel Arteta, Jack Wilshere, Aaron Ramsey and Santi Cazorla, he could afford to be more adventurous in his side's play. With Wilshere dropping deep to play neat balls with Ramsey and Arteta before then driving play forward, the Gunners exerted influence on the game, with Sunderland's midfield struggling to keep up with their visitors' impressive movement. Indeed, the game's one true moment of quality was also the game's winning goal, as Wilshere drifted his way effortlessly past two men, before Theo Walcott laid off a pass which Cazorla finished sublimely. 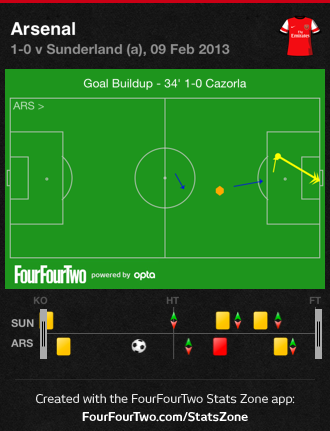 Sunderland's Use Of Width

Although it took until Jenkinson's dismissal on the hour mark for it to become blatantly obvious, the way Sunderland used width in this game was intriguing.

In the opening half, with Stephane Sessegnon on the right and Adam Johnson on the left, the home side effectively had nine men on the pitch. Transitions from defence to attack were lethargic, neither of their wingers were particularly involved, and the Arsenal defence had an easy job of dispossessing Steven Fletcher. The latter would often move out wide in search of joy, but with neither Sessegnon nor Johnson seeking to move ahead of him, it made for some sloppy attacking play.

In the second half, the two wingers swapped sides, and an instant improvement was seen - even before Jenkinson's red card. Indeed, it was good work by Sessegnon that saw the young defender dive rashly into the challenge that saw him booked for a second time. 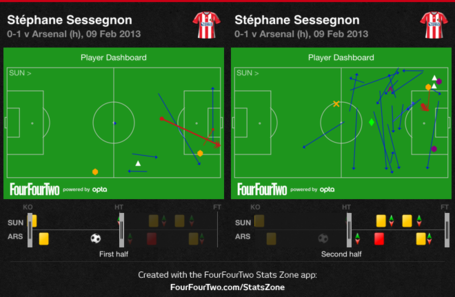 The difference in Sessegnon's involvement across the two halves is startling. In the first, he scarcely looked interested. In the second, playing as, effectively, an inside forward, he was vibrant and forward thinking. He achieved a 100% passing success rate across the game, but it was his improved urgency that saw him a constant threat in the second half. 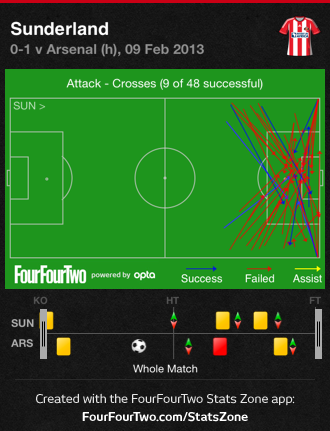 Sunderland threw over a huge 48 crosses on Saturday - with 30 of them coming following Jenkinson's dismissal. Not possessing a real playmaker in the middle, O'Neill knew his side needed to batter the visitors from wide areas, and hope that, eventually, Bacary Sagna or Per Mertesacker put a foot (or head) wrong. 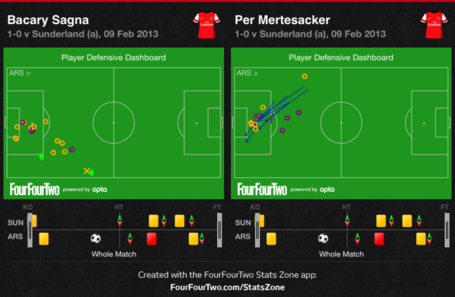 Unfortunately for the home side, the Gunners' two central defenders were nothing short of immense. Sagna contributed 15 clearances and showed no signs of being out of his preferred full-back position - even the arrival of Danny Graham, who won a few aerial tussles, proved not to be enough for the Black Cats.

The disappointing thing about Sunderland using width was that, even after Arsenal went down to ten men, the home full-backs were never likely to be seen marauding up the line. 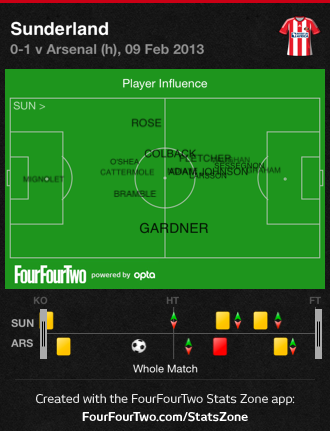 Sunderland's player influence graphic, which shows where players' average position across the game was, is striking in how, with Sessegnon and Johnson heavily involved as inside forwards (or inverted wingers), there was a large area of space for Danny Rose and Craig Gardner to move into.

Gardner, in fairness, pushed forward at times, though still not as much as may have been preferable. Rose, on the other hand, was criminally underused before his departure through injury in the 2nd half. 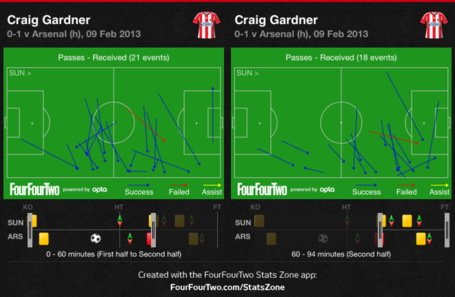 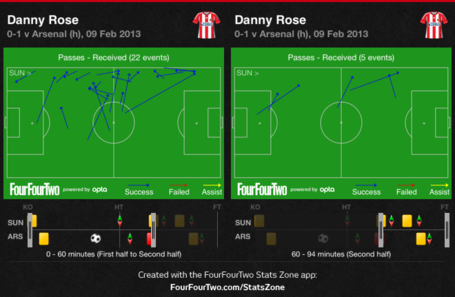 Following Jenkinson's red card, which saw Aaron Ramsey shifted out of position to right-back, Rose received the ball from a teammate only five times. For a player who has proven his ability to get forward and cause the opposition problems, this was fairly baffling - even if Stephane Sessegnon was a frequent recipient of the ball on the left wing.

Perhaps the answer to why this continues to be the case for Sunderland is that Martin O'Neill, recognising his side's very real limitations, is reluctant to allow players to stray too far from their individual "zones". The sparing use of Rose could be explained by how Sessegnon is unlikely to offer much defensively should his left-back lose the ball high up the field.

In the second half, Seb Larsson once again impressed from central midfield. His performances there in recent weeks have been much improved, and he offered a drive that was lacking in the opening half. 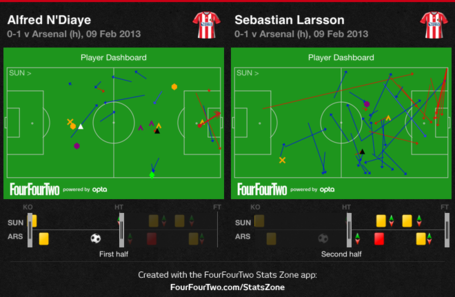 Alfred N'Diaye was originally deployed as his side's highest central midfielder. Despite making some decent runs, he arguably should have scored with his header some 30 seconds into the game, Sunderland's disjointed attacking display made it difficult for the Frenchman to properly drive his side forward.

In the second half he dropped deeper, filling in for Lee Cattermole and, as shown, Larsson was a strong influence in the pressure Sunderland exerted. His crossing from set-plays and open play was much improved and, despite his side's inability to finish one of their numerous chances, his performance was a pleasing sight from a man who has flattered to deceive for much of the season.

It took a moment of real quality to win this game, though without Simon Mignolet Arsenal could have been out of sight at the break. That said, were it not for Wojciech Szczesny, Sunderland could well have won the game - the Polish stopper made some fine saves in the second half.

Sunderland have some very clear limitations, but the point about them setting out negatively is one that is overblown. The opening 20 minutes of the game was a very even affair; Arsenal's midfield superiority told in the remaining time in the first half.

Yet, the home side came out brightly in the second and did pretty much everything but score. O'Neill's reluctance to let certain players play with more freedom can be frustrating, but the manager - probably rightly - has reasoned that it is a necessary frustration.

Sunderland Vs Arsenal: As It Happened