Why The Stats Of Poyet Revival Point Towards Sunderland Survival

Will 2014 be the year for Sunderland and Gustavo Poyet to complete a memorable escape from what looked like near-certain Premier League demise? The stats suggest that it just might be.

Share All sharing options for: Why The Stats Of Poyet Revival Point Towards Sunderland Survival

Since we are a really modern and trendy football interwebby bloggy thingy, we just love our stats. Actually, that's not strictly true, because as Sunderland fans we have come to learn that stats just generally remind us about how rubbish we tend to be.

But as 2013 comes to an end - a year in which Sunderland have statistically been the second-worst performing professional club in the whole country - we thought we'd look at a few stats to breed enthusiasm going into the new year.

First of all, here is what the table would look like if the league had started the day that Gus Poyet was appointed Sunderland manager. 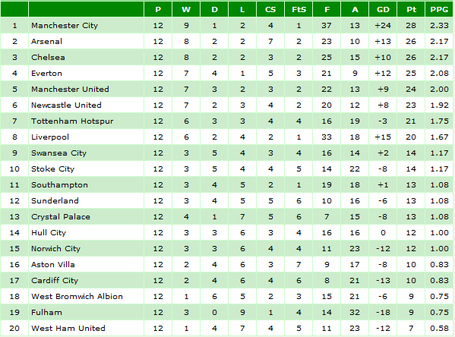 Pretty decent record, in fairness, particularly when you consider that 7 of the 12 games played under Poyet have been away from home and 3 of the 5 home games have been against last season's top 5.

If you are feeling extra generous too and wish to attribute the Swansea game to the dying embers of the previous regime, then the points per game under Poyet then rises to 1.18 - a return which, if maintained for the remainder of the campaign, would see Sunderland finish on 36 points this season.

But would 36 points be enough for survival? It is impossible to say for sure, but you would be surprised what it gets you in the Premier League. In the last 10 years, 36 points would have guaranteed survival in 5 of them. In a further 3 seasons it would have been enough to take the survival race down to goal-difference.

In fact, only twice in the last 10 years would 36 points singularly condemned you to relegation.

Clearly, further improvement is needed as a matter of priority. Nothing has changed there. Nothing should ever change there, no matter where we are in the league.

But the point is to highlight the improvement. Yes, we are still bottom of the league and, yes, we still have a hell of a lot of work to do. On the day that Gus Poyet things looked desperate. The club were not even involved in the fight at the bottom. We were essentially the skinny little wannabes, posturing around the periphery wheeling our fists at the fight but never actually in any danger of joining it.

That day we were 6 points away from 17th. Now we are 2 points away. It is within touching distance.

Maintain what we have have done since Poyet arrived, and we have a fighting chance. Improve upon it, even just slightly, with what looks like a kinder home fixture list, solid away form and an active January, and we have a really good chance. That would have been almost unimaginable after 7 games this season.

So... this New Year, eat well, drink plenty, gather your resolve and steel yourself for the fight. Because, now, as we look forward to 2014, we can finally say that we are actually in one, and I for one really fancy our chances.