It's time for a tactical review of Saturday's miserly home draw with Chris Hughton's Norwich City, a result that laid bare - once again - the profligacy of this Sunderland side. 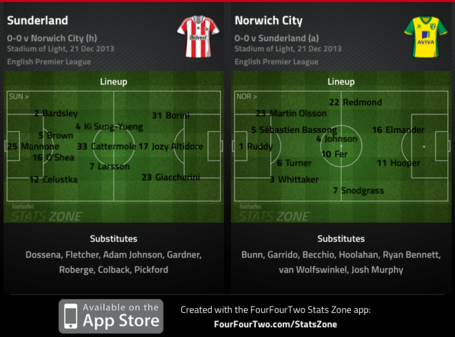 Gus Poyet once again opted for Jozy Altidore as his lone striker on Saturday, with Steven Fletcher deemed suitable only for the substitute's bench. Contrary to the above graphic, the Sunderland boss frequently looked to deploy Emanuele Giaccherini "in the hole" behind his American frontman, with Larsson and Borini moving out wide.

Faced with a Norwich side who were happy to sit back and attack on the counter from outset, Gus Poyet's men needed to find a way of breaking them down. The system employed by the Uruguayan followed much the same vein of other games over the past month - full-backs Ondrej Celustka and Phil Bardsley were encouraged to get wide high up the field, with Lee Cattermole dropping in between John O'Shea and Wes Brown to pick the ball up and distribute from deep. Ki Sung-Yeung was the shuttling presence in midfield, with Giaccherini expected to link play between the middle third and attack. 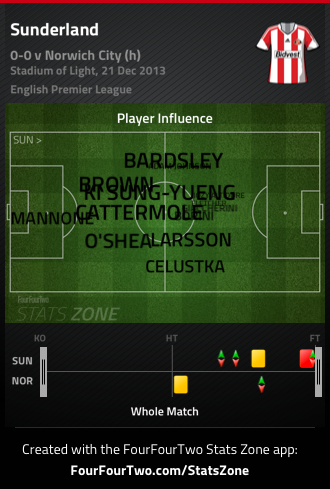 The above influence chart reflects the nature of the system, but also shows quite why it fell down in terms of creativity on Saturday. Only Bardsley and Celustka offered any real width to proceedings, while the combination of poor movement from Giaccherini and Altidore alongside compact defending from the visitors ensured there was little room for Sunderland to create opportunities through the middle.

The game was crying out for a better use of width from the home side, but time and again it was not forthcoming. Bardsley, a right footed played deployed on the left, naturally sought to cut inside.

Celustka, meanwhile, showed a worryingly lack of conviction. At times one wondered if an invisible wall had been erected in front of the on-loan defender some 30 yards from goal; time and again, Celustka would move forward and receive the ball wide, only to completely lose the courage to attempt to take his man on or create something in an attacking sense. The man from the Czech Republic sent 29 of his 44 attempted passes either square or backwards (66%) - a shockingly high percentage from a full-back - and only 9 of his 15 forward passes found a red and white shirt.

In truth, Celustka offered a perfect example of what is wrong with this Sunderland side: they lack the courage to affect play in a meaningful sense. Poyet has shored up the backline, though Vito Mannone was still forced into a number of good saves against the Canaries, but up front the Black Cats remain as toothless as ever.

Being a striker in any Sunderland side must be a difficult, infuriating task, but signs continue to suggest that perhaps Jozy Altidore is not cut out for the world of Premier League football. Saturday again saw him conspicuous by his sheer lack of involvement. Norwich deserve credit for snuffing out chances - they made 13 interceptions and were successful in 25 of 35 attempted tackles - but once again it appeared that Sunderland's lone striker struggled to make any kind of effective runs in order to stretch the visiting defence. 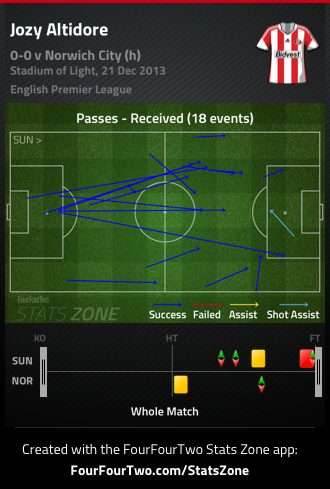 In 68 minutes on the field, Altidore received the ball just 18 times. By comparison, his replacement Steven Fletcher notched 14 receptions in just 26 minutes (there were four minutes of stoppage time), despite not playing particularly well himself. Nor were Sunderland any better in the latter stages of the game. The evidence simply points to Altidore being a man who either struggles to make meaningful movements off the ball, or who is not on the same page as his teammates. On the one occasion he did receive the ball in a good shooting position, he displayed the lack of confidence that is endemic in the side: failing to shoot first time, his need for an extra touch allowed Norwich to get a man out in front of him, and his eventual shot was blocked.

Of course, Sunderland's creative woes are not his fault alone. Emanuele Giaccherini has looked a bright spark in recent weeks, but on Saturday he too was pretty much invisible. When he did receive the ball he wasn't particularly inefficient, creating two chances, but all too often he failed to find the pockets of space that he is expected to. Norwich deserve credit for this, Bradley Johnson offered an excellent shield to the defence, but in a game where Sunderland needed to break down their opponents, Giaccherini (and Ki, and Larsson) failed to do so. He was replaced by Adam Johnson, whose own lack of confidence is startling and depressing to watch.

Gus Poyet has, for the most part, improved Sunderland's defence. They have kept consecutive clean sheets in the league now, while Norwich's only real opportunities on Saturday came from swift counter-attacks. This was, of course, Chris Hughton's gameplan, but thankfully for the Wearsiders they were able to rely on their goalkeeper to keep them out of trouble.

The issue is how Sunderland improve their goalscoring prowess - it is currently non-existent. The side has registered just 12 successful strikes in 16 league games. On Saturday, Phil Bardsley had the most shots of anyone in the team (4), the bulk of which were tame efforts from long range.

Altidore and Fletcher look unsuited to lone striking roles. Altidore's movement is not good enough and he lacks conviction; Fletcher struggles with physical defenders and lacks pace. Sunderland have never been the most creative of sides anyway, and with Norwich happy to sit in a compact manner Saturday was always going to be a struggle, but it remains that this was a game Poyet's men absolutely needed to win. Instead, they struggled to create any meaningful opportunities.

What the side needs now is a truly creative player who is comfortable playing in the centre of midfield (or for Giaccherini to step up), alongside a striker who offers something different. Whether that is attainable or not remains to be seen.

Sunderland had 18 attempts on goal, yet only two came from inside the opposing penalty box. For all Poyet's men dominated possession (59% to 41%), it was the Canaries who looked more dangerous, registering more shots on target despite their relative dearth of time on the ball.

Lee Cattermole was a solid presence once more, but Ki looked short on ideas while Seb Larsson offered little in an attacking sense. Arguably Sunderland's best outfield player was Fabio Borini, who offered plenty of running and effort with little reward. The Italian's evident pace surely merits a start for him up front.

Poyet must now gather his side together for a congested Festive period. They will be shorn of Wes Brown for the next three games after his ludicrous late challenge garnered a deserved red card (he should be fined the maximum possible), something which will do little to aid their hopes. It seems almost certain that the manager will look to bolster his attacking options as soon as the transfer window opens. He certainly needs to.