We take a look back at Saturday's home defeat to Andre Villas-Boas' men, a result which leaves Sunderland rooted firmly at the bottom of the table. 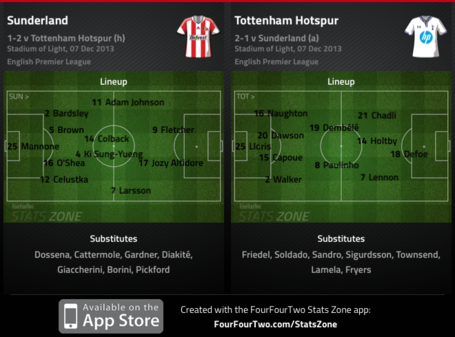 Err, yeah. Quite why Gus Poyet opted for a 4-4-2 formation on Saturday evening is really anyone's guess. The Uruguayan has proven quite the sensible manager so far during his reign on Wearside, yet that seemed to disappear against Spurs, with the a central midfield three bizarrely ditched in favour of lining up with two strikers. Perhaps Poyet felt, with two strikers, that he could get at a visiting side that has looked rocky at the back over recent weeks, but it backfired and allowed Andre Villas-Boas' men to assume control of the central third of the field.

Frankly, it appeared rather as though the system was selected as a way of shoehorning Steven Fletcher into the lineup. Rightly surmising that Jozy Altidore should retain his place in the side after a swashbuckling display against Chelsea in midweek, Poyet pitched the Scottish striker up front too, in a move that backfired completely. 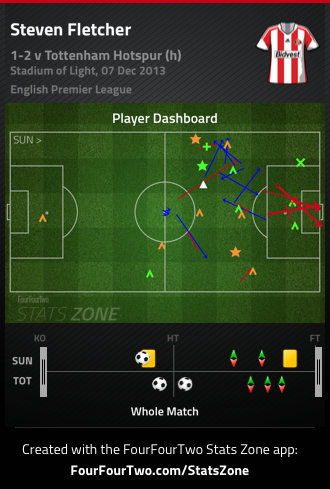 Despite registering two efforts on goal, Fletcher was scarcely involved. Nor, it must be said, was Altidore - who showed a lot of wilful running but little in the way of a genuine threat - but it was the relative invisibility of Fletcher that was concerning. When he was involved, he was wasteful: 37% of his attempted passes failed to find a man, a worryingly high figure. He was not helped by the lack of support from behind him, particularly in the second half when, for a long spell, Spurs rolled the ball around with complete ease. Yet, this is another in a growing list of poor performances from Sunderland's top striker. In hindsight, Poyet should have stuck to three in midfield, even if it meant the £12m man sitting out a second consecutive game.

The inevitable consequence of this shift in system was that the away side controlled the central areas. Sunderland actually started the game relatively well, and their goal came as a result of an excellent, flowing move, but even prior to their dip in performance (after that opening goal), Spurs had looked more commanding in the middle. 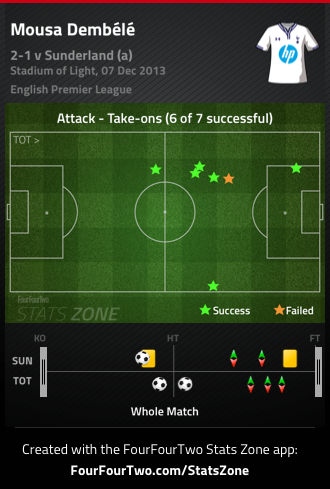 The chief benefactor of this was Moussa Dembélé. The Belgian was at his mazy best on Saturday, drifting rather effortlessly past Jack Colback in particular, and really driving AVB's men forward. He created four chances from open play and was heavily involved throughout. It was, of course, a good performance on his own part, but this game should have underlined to Gus Poyet what many of us have known for over two years now: this Sunderland side does not possess sufficient midfield quality to deploy two men in the centre, especially against clearly superior sides.

It must be said that, shocking though Sunderland's second half confidence drain was, the visitors deserve credit for their own application. Villas-Boas noted the Wearsiders' newfound love of possession football, but also - correctly - reasoned that it may all fall apart if they are pressured from high up the field.

Vito Mannone made just 12 short passes out from his goal, with Jermain Defoe and Lewis Holtby pressing consistently to stop the likes of Ki Sung-Yeung providing a short option. As a result, Mannone was forced into 15 long passes and, with Fletcher in particular having a miserable time in the air, only three were successfully completed.

Holtby was excellent. The German international was a persistent thorn in Sunderland's side on the ball, but even more impressive off it, relentlessly pursuing home defenders and ensuring that Poyet's men excessively resorted to the long hoofs that the new manager has tried to iron out over the past two months. 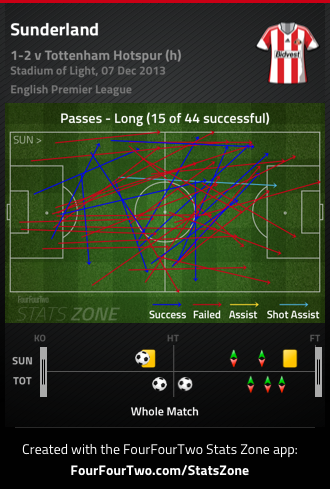 Even allowing for a wise Villas-Boas game plan, though, Poyet will have been disappointed at his side's inability to play "his way" under pressure. The possession football he has employed specifically helps to build confidence in the side - and particularly the defence - as it allows the players to ease themselves into the game, getting plenty of touches on the ball and spending less time defending opposing attacks. Spurs pressed well, but more composure was needed from a Sunderland side that has proven itself more than capable of playing the game their manager wants them to. It is little surprise he was so exasperated come full-time.

This was a very bad day at the office for Sunderland. Bad refereeing decisions aside, Spurs could easily have hammered home four or five - the winner here was a deserved one.

For Poyet, too, it was a chastening experience. The Swansea debacle aside, the new man has been pretty much spot on in his reign so far, opting for pragmatism primarily before slowly but surely making his mark on the side. Four changes on Saturday after a tough midweek game three days previously pointed to pragmatism once more, but, in hindsight, it was a miserable failure.

The manager may well have found out more about the current squad through defeat than he did in any victory. He will have noted - as we all have - the side's horribly brittle confidence. Tactical nous is worth little if the players lack the mental fortitude to put plans into action. The main upside of the scenario is that few sides will be able to press quite as effectively and relentlessly as Spurs did; but Poyet must now return to a three man central midfield, and hope his team can bounce back in a crucial trip to West Ham this coming weekend.

Sunderland Vs Tottenham Hotspur: As It Happened