Our tactical feature returns to review Saturday's 1-0 defeat on Humberside.

Share All sharing options for: Talking Tactics: Hull City (A) 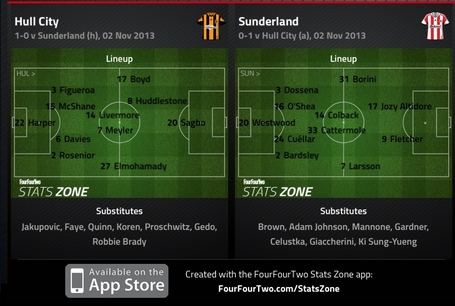 To describe the opening 20 minutes of Saturday's match as tentative would be putting it mildly, but the most apparent feature to Sunderland's play was the amount of hurried clearances under little or no pressure. Whatever confidence last week's result produced seemed insufficient as Carlos Cuellar in particular looked shaky whenever the ball was directed towards him. 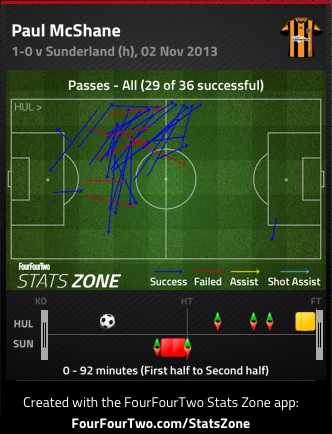 In contrast, Paul McShane sought to establish a rhythm in the game by simply putting his foot on the ball, and finding a team-mate - more often than not Maynor Figueroa (who he passed to on 14 occasions). This enabled Hull to build attacks from the back, as the highest pass combination in the game was Figueroa to Tom Huddlestone, the latter then leading the way in passes and chances created.

The frustrating aspect from a Sunderland perspective is that they were able to generate possession in the first half - they had 15 ball recoveries compared to Hull's 18, and made 14 tackles (12 successful) to the hosts' seven - yet conceded any hope of building a foundation in the game by going long when other options presented themselves.

Keys To The House 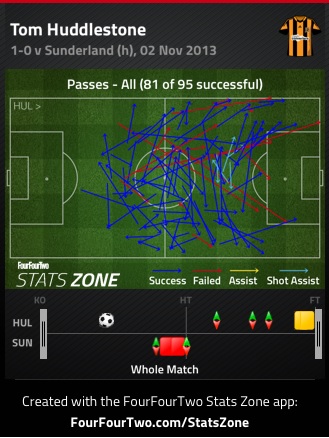 Huddlestone's performance was going to be an area of interest in this game due to Paolo Di Canio's rather public courting of him in the summer. The man who could ‘bring the keys to the house' was pivotal to Hull not only attempting to build attacks in the first half, but enabling them to make full use of the two-man advantage they enjoyed after the interval. 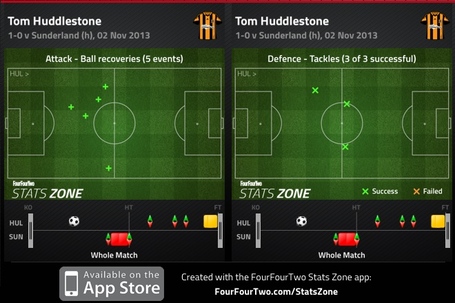 In addition to what he brought to his side with the ball, he was important without it - of his five ball recoveries (see graph, above) four came in the first half when Hull were still striving for ascendancy in the game.

As influential as he was, Huddlestone, and his team-mates, proved wasteful in shooting situations - finding the target just once in five attempts. 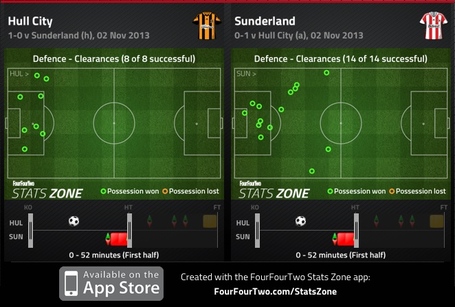 Sunderland's early lack of composure was only compounded by Andrea Dossena's challenge just before half-time, but having fallen behind, had parity in the first half. In addition to the aforementioned tackle and ball recovery stats, there was a 8-14 outcome in terms of clearances - unfortunately Hull only had to make one more in the second half to amass a total of nine.

Much to their credit, Sunderland produced more chances on goal in the second half than in the first, albeit proving as wasteful as the home side. Defensively, the nine men showed resilience in thwarting the home side's forays forward - with 9/11 of their blocked shots coming after half-time.

Tactically, Sunderland presented little in the way of attacking coherence, which was only intensified by the two red cards. Moving forward, Poyet has to find a balance - not only in attack but the composition of its midfield and defence that will allow Sunderland to become, in time it must be stressed, as expressive as the Uruguayan likes his sides to be.

Hull City Vs Sunderland: As It Happened