Kevin Friend angered Wearside this weekend by being a total berk, but it is far from the first time a sighting of the Leicestershire official in the vicinity of Sunderland has spelled impending doom for the Black Cats.

Share All sharing options for: Kevin Friend: The Long-Standing Harbinger Of Mackem Misery

THE big talking point from the weekend from a Sunderland perspective was the utterly bonkers red card issued to Wes Brown for a clean, controlled, and generally superb piece of tackling. The general consensus is that Kevin Friend is a total berk, though some have suggested something a little more sinister at work.

I dismiss that assertion personally, but I do hereby dub Kevin Friend Sunderland's harbinger of misery. Whenever he comes into contact with Sunderland, bad things happen for us, and not just things limited to his decisions.

We are not hugely well acquainted if truth be told. Friend has taken charge of just 15 Sunderland games since we first met in seven years ago. With that in mind, the following selection of events is even more remarkable.

Sunderland and Kevin Friend first crossed paths on Remembrance Day, oddly enough. Sunderland had the lead in this Championship clash courtesy of a Ross Wallace free kick in a game that is perhaps most memorable for a remarkable Darren Ward save.

There were early signs of the harbinger of misery that the ironically named Friend would become, as a very young Gareth Bale snatched a 90th minute equaliser with a deflected shot.

This one will probably be remembered for being the day Jermain Defoe broke Craig Gordon's arm with a cowardly stamp. Not only did it go unpunished by Friend, but he allowed play to continue and Spurs to have a free pop at goal with the Sunderland goalkeeper lying prone and literally broken in his penalty area.

Earlier on, Darren Bent had missed a penalty. Well, he had seen a penalty saved by the goalkeeper who had brought him down as the last man and not been sent off. Standard.

Sunderland were well-beaten here in truth, as Martin O'Neill's rampant Villa side produced the archetypal away performance. Friend still had his say, though, sending off Cats skipper Lorik Cana in the second half.

This time, Kevin Friend did oblige to send off an opposition player for a last-man foul, and Sunderland took advantage by scoring the penalty and looking generally assured.

It didn't last long, however. Friend would issue two yellow cards to Lee Cattermole inside six second half minutes and later send off David Meyler too, though he could have few complaints in fairness.

Portsmouth grabbed an equaliser in the sixth minute of injury time.

Yet another utterly miserable 90 minutes, which saw another late opposition goal. This time it was Peter Odemwingie, who himself would become something of a scourge of Sunderland, who grabbed the winner in the 81st minute.

This was arguably Friend's worst performance against us, and yes, I did mean 'against us'. Liverpool opened the scoring when they were awarded a penalty kick for an offence that occurred at least a couple of yards outside the box. It wasn't even close, nevermind borderline. 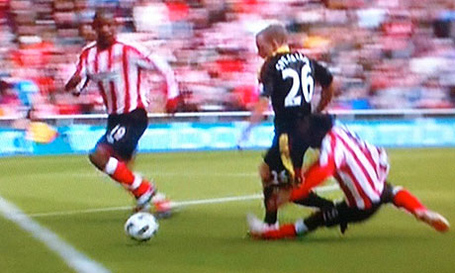 In the second half he sent off John Mensah for apparently being the last man, despite no one actually having the ball or any hope of getting it and there barely being a foul committed anyway. The card was later rescinded by the FA.

This is a game with many names. The 'Fat Geordie B*stard' game, some call it. 'The day the bigots rained down their race hate upon Imperious Me', Steve Bruce probably calls it. Either way, it was a whole stack of misery.

Kevin Friend awarded the Latics one of the softest penalties you'll ever see, punishing the nefarious Seb Larsson for his unforgivably brutal brushing of of powerhouse Victor Moses' calf. Or it might have been a crisp packet. Who knows.

The late goal came, as it so often seems to with Friend officiating. Franco Di Santo capitalised on a defensive error to win it in the fourth minute of injury time, and Steve Bruce was gone.

Standard Sunderland collapse at Goodison. Can't really blame Kevin Friend for this one, though it most certainly was miserable.

This was pretty much as miserable as it gets. Half empty stadium, freezing cold, FA Cup replay against lower league opposition, and so easily beaten they probably sent us a fruit basket out of guilt the next morning.

They opened the scoring with a penalty, by the way. Cheers Kevin. (Can't remember if it shouldn't have been)

The day another manager's reign came crashing down around his ears. It was a fair cop really, beaten by the better side courtesy of a Titus Bramble own goal. Still, Kevin Friend's harbinger of misery legacy was suitably enhanced by being there to preside over the final act of Martin O'Neill's Sunderland.

Which brings us bang up to date. No one needs reminding of this one. Wes Brown - a footballer - was asked to leave the pitch for kicking the ball whilst close to an opponent. Oh, and the standard late opposition goal too.