We take a look back at Saturday's ultimately fruitless trip to the Britannia Stadium, and investigate the tactical intrigues of a game largely ruined by refereeing incompetence. 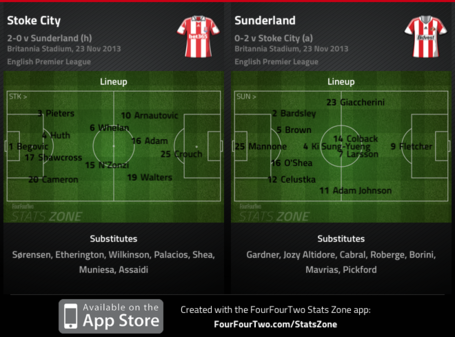 While we all know that Gus Poyet prefers a game based around building slowly and retaining possession, his brief spell on Wearside so far has actually seen rather pragmatic tactics employed, as opposed to sticking to one philosophy for every game. The home win against Newcastle was one where Sunderland were less concerned with having a high share of possession, just as the second half against Manchester City saw the Black Cats - necessarily - revert to a more defensive strategy that meant they were without the ball for large portions of the game.

Yet, the trip to Stoke confirmed Poyet's overall aim. Sunderland started brightly, knocking the ball about patiently at the back and looking to carve openings in a more considered manner. Even following Wes Brown's dismissal, Poyet remained loyal to his plan, refusing to change tact and encouraging his side to get the ball down and keep it, even allowing for their numerical disadvantage.

His decision to move to three at the back in the second half, bringing Fabio Borini on in the process, was a positive sign. Poyet, rightly, preferred to heighten his side's chances of gaining an equaliser, keeping numbers in midfield and boosting the attacking options. This, of course, increased the risk of Stoke nicking a second on the break - which is exactly what they did, courtesy of Steven N'Zonzi's goal - but it was refreshing to see the side continue to try and control the game, even with a man less. 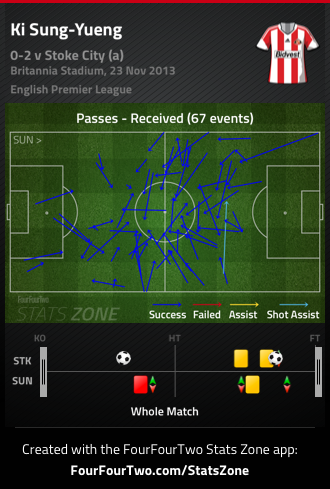 Unsurprisingly, Ki Sung-Yeung was pivotal to Sunderland's fortunes. The South Korean's willingness to pick the ball up from deep has been immediately obvious already this season, but Saturday underlined how he affects play higher up the field too. The midfielder received the ball across the length of the pitch, and is continually in space, offering options to team-mates. In the second half, he laid on Sunderland's best chance, when Adam Johnson fired just wide.

Unsurprisingly, given Stoke's famed height advantage, Sunderland refrained from trying to create chances from wide aways. They attempted a relatively small 21 crosses - largely from set pays - and were only successful with two.

Instead, they looked to create things through the middle. Ki, of course, was crucial to this, but so too were the likes of Adam Johnson, whose ability to cut inside was continually utilised, most evidently in the first half when he played in Steven Fletcher. 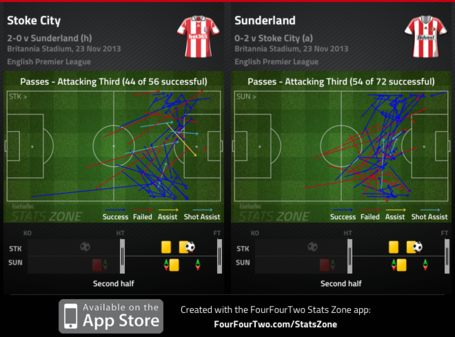 Even in the second half, Sunderland attempted (and completed) more final third passes than their hosts. There was no attempt to get in behind down the wings, instead seeking through balls in abundance. Sunderland's one man disadvantage obviously didn't help their fortunes, but their decision to keep the game narrow and compact - in contrast to Stoke's attempts to stretch the play - was one of the reasons they remained in with a shout of getting an equaliser for so long. 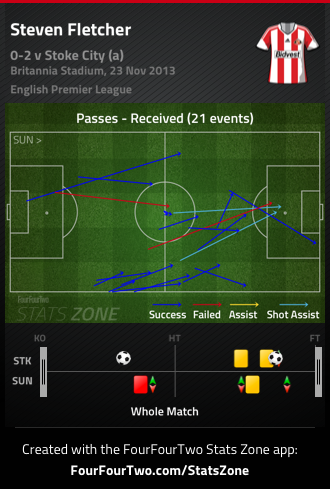 Perhaps the most worrying thing to come out of Saturday was the performance of Steven Fletcher. Even allowing for the chance he had well saved by Asmir Begovic in the first half, and the ludicrous challenge Begovic got away with in the second, Fletcher spent much of the game cut adrift from his team-mates. Considering Sunderland still had a lion's share of possession, this was rather worrying.

Fletcher was very rarely involved in proceedings, and had difficulty linking up with the midfield. The removal of Emanuele Giaccherini's creativity (sacrificed following Brown's red card) did not help matters, but Fletcher will still be disappointed with his showing at the weekend.

As we all know, this game was marred and affect by Kevin Friend's ridiculous dismissal of Wes Brown. It had been a tight game prior to that, with the one real moment of quality being the home side's opener.

From a tactical point of view, the signs were encouraging for Sunderland. The risk of conceding a second was always likely to be there once Poyet decided to stick to his guns, but it remained the right decision and could well have paid off on another day.

Stoke City Vs Sunderland: As It Happened