We take a tactical look back at Sunday's 1-0 win over Manchester City in the Premier League. 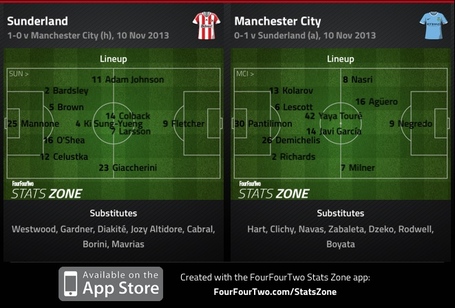 From the kick off, Sunderland's preferred way of playing was apparent; patient, controlled (when possible), with the emphasis on finding an opening - rather than forcing one.

Vito Mannone often had the conviction to pass short from goal kicks, with the option to find either centre-back provided by Ki Sung-Yeung dropping deep to allow John O'Shea and Wes Brown to move wider, also enabling the full-backs to advance up the field. Phil Bardsley's goal was a fine example of such - the left-back was Sunderland's most advanced player at the time of Brown's pass, with the replay showing that Jack Colback had dropped into the space vacated by Bardsley to offer protection should the raid not have come off. Colback's flexibility is already proving key in transitional play, with this another example of the protection he provides as Sunderland attempt to become more progressive with the ball.

It was also noticeable that arguably City's best chance in the second half - Jesus Navas' blocked shot by Bardsley - stemmed from a long goal kick that easily conceded possession. Whilst it is unrealistic for Sunderland to go short at every opportunity, finding a balance between short and long options (Steven Fletcher was isolated in this example) will be crucial moving forward.

Ki To The Plan 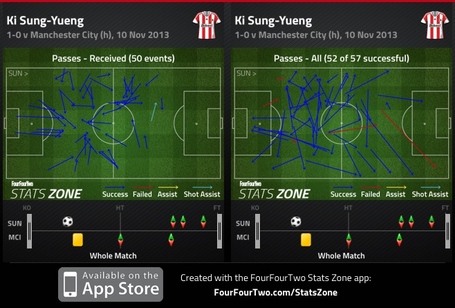 The left-hand side of the graph depicts the earlier mention of Ki's involvement in building attacks (note the cluster of receptions just outside the penalty area). The South Korean was the only player from the home side to surpass 50 passes, and he featured in his side's two highest pass combinations (Bardsley-Ki 10, Ki-Brown 10).

It is also worth noting that despite City enjoying almost twice as much possession, four of Sunderland's five highest pass combinations involved a systematic approach - in fact the Mannone to Fletcher combination was only successful on four occasions.

Due to City's ascendancy in possession, there was inevitably going to come a time where Sunderland were put under pressure. As in recent meetings, however, the home side resisted commendably - with Brown and Seb Larsson particularly impressive. 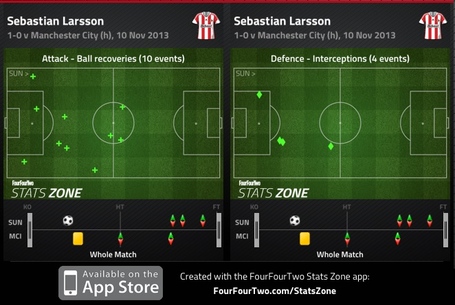 The graph above depicts Larsson was effective in screening the back four - leading the way with 10 ball recoveries. Larsson's four interceptions were only bettered by Brown (see graph, below), while his four tackles were joint-highest with Bardsley and O'Shea. 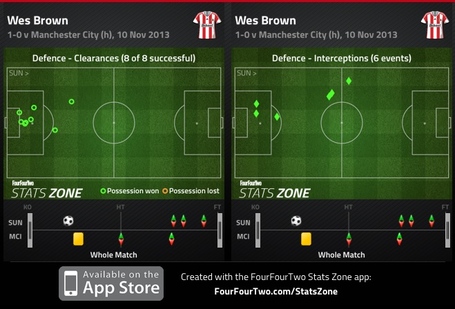 The protection provided by the central midfield three is best displayed by Sergio Aguero's inability to wriggle out of close situations as he is accustomed to, managing just 2/8 take-on successes and only finding the target once in four attempts. 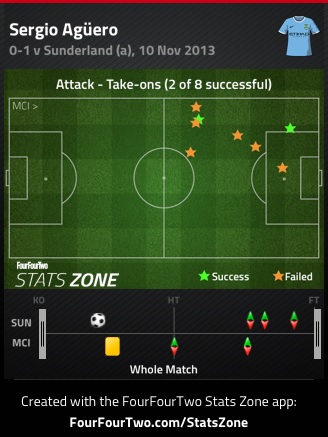 In addition to the body-on-the-line aspect of Sunderland's defending - Sunderland blocked eight shots and 12 crosses - there was also thought. Between Brown and O'Shea there was a semblance of a genuine understanding between the two that has been absent in a Sunderland defence for some time, evident by the fact that Brown was not credited with a single aerial duel - a task that was delegated to O'Shea (2/3 aerial wins), with Brown generally focussed on clearing up anything that got by his partner. A mention must also go to Mannone's communication with those in front of him, and his decision-making when choosing to collect crosses and extinguish pressure situations.

Whilst the result was crucial, certain aspects of the performance proved equally so in aiming to reunite the club. For all the talk of strong characters amidst Paolo Di Canio's dismissal, Brown actually epitomised the leadership figure that Sunderland has lacked for some time. Where he put his body in front of a shot, Larsson and Bardsley tended to follow. His presence, even on a semi-regular basis, should ensure that Sunderland will not revert to their mentally fragile past.

Moving forward, Poyet will need to find a way to make play in the attacking third become as seamless as it looked at times in deeper areas, but it was encouraging - and vindicating for the manager - to see a team still very much in development have the conviction to play from the back against a stronger side when in form. The Uruguayan has spoken in the press recently about ‘doing more' to help out the likes of Adam Johnson - a refreshing approach when compared to the get-it-to-them-and-see-what-happens way Sunderland toiled under Martin O'Neill at the start of last season.

Sunderland Vs Manchester City: As It Happened