We take a look at the facts, figures and graphs to see what went wrong and what went right against Manchester United this weekend. 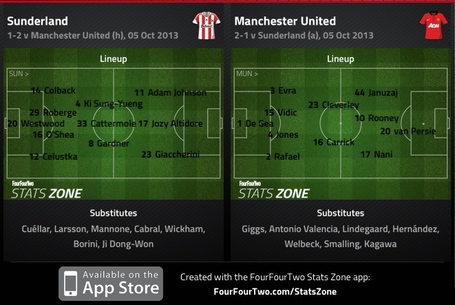 Kevin Ball changed the dynamic of his starting line-up against the Champions; having previously set his team up in a 4-5-1 formation, Sunderland started with a 4-3-3 shape, with Adam Johnson and Emanuele Giaccherini given higher starting positions which would soon reveal the intentions behind the change.

Shape Shifting - And Why 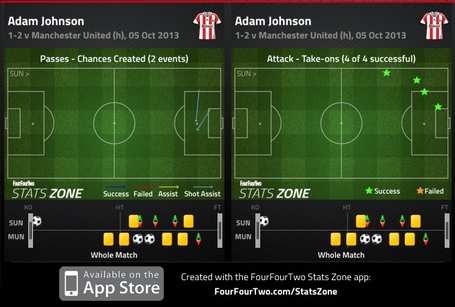 By utilising both wingers further up the pitch, it sought to pin Manchester United back - particularly the full-back pairing of Rafael and Patrice Evra. The latter notably was occupied by Giaccherini in the first half, which left the Frenchman mindful when looking to join United attacks. In doing so, Ball also reduced the defensive responsibilities of his wide duo - allowing them to focus on causing problems for the opposition - which again was evident in their first half performances. Johnson twice found Giaccherini with space in the area, but unfortunately the Italian was unable to capitalise on two of the game's best chances.

It was noticeable too that as Sunderland tired, the effect of nullifying Evra diminished. He was afforded time and space to pick out Adnan Januzaj for the opening goal, and created another chance from a cross shortly after. The graph below also illustrates how Januzaj was effective when travelling with the ball - equally as much a result of Sunderland's tendency to become compact without the ball as his ability in tight situations. 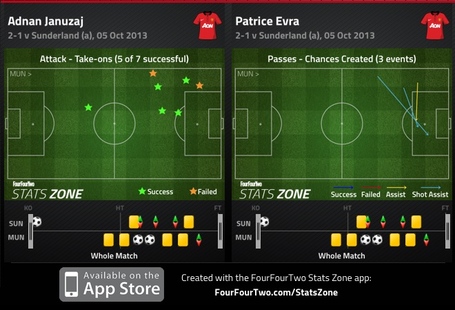 Behind the attacking trio, Craig Gardner replaced Seb Larsson as part of a three-man central midfield. Against Liverpool, Larsson was expected to be the man to push forward and support Jozy Altidore, with the freedom provided by Lee Cattermole and Ki Sung-Yeung's positional discipline alongside. However, the change in personnel was effective, as Gardner's time at Birmingham City conveyed his suitability to this role. 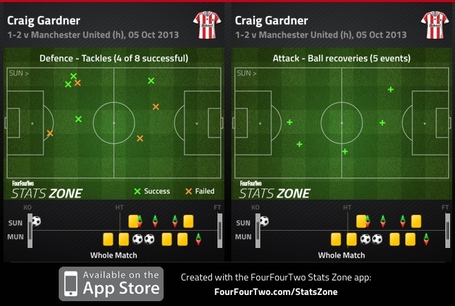 The graph above shows how Gardner's urgency in the pressing game enabled his side to stifle the visitors early on - whilst not all of his tackles were successful, he was combative high up the pitch, and two turnovers in particular drove Sunderland forward (his goal initially came from him winning the ball and finding Giaccherini, and moments later he won possession only to dwell on the ball in the penalty area, allowing Phil Jones to get back and clear).

In contrast, when Larsson replaced Gardner on 56 minutes, he managed just 1/2 tackle wins, and a single ball recovery. 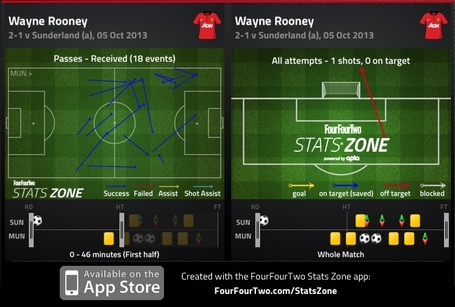 The key result of Sunderland's pressing in the first half was just how limited Wayne Rooney was.

Of the 56 times Rooney received possession in the game, just 18 came in the first half, most of which in deep situations. Again, in the same period, he completed just four passes in the final third (when his total was 15 from 27) and his only shot came on 73 minutes.

Similar could be said for Robin Van Persie; of his 28 receptions, just 12 came in the first half, whilst his two efforts on goal came as Sunderland fatigued, although he should have exploited such a weakness when firing wide after going one-on-one with Keiren Westwood. 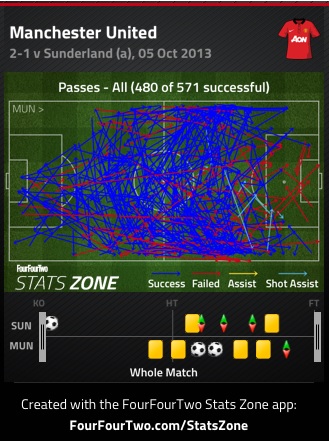 Tactically, Ball's game-plan unsettled United early and enabled his side to gain a foothold, and it was perhaps to his credit that it took two high-quality finishes to thwart it. The graph above shows how his side forced United to pass wide, with the three-man midfield adequately protecting the middle, which led to the visitors making 30 crosses to Sunderland's 18. Despite that, only three were successful, and had a fourth been effectively cleared then the winning goal may have been prevented.

Fatigue, as well as United finding a passing rhythm in the second half saw them assert pressure, however Sunderland's inability to convert opportunities in the first half was always going to leave them vulnerable as the game wore on.

Sunderland Vs Manchester United: As It Happened