Phil Bardsley may be edging nearer to worming his way back into the Sunderland first team picture. Where do we stand in this nice little minefield, then?

Share All sharing options for: The Phil Bardsley Debacle's Latest Twist In Tweets

The latest line from the local press, specifically The Journal's Mark Douglas, is that the right back is firmly back in the first team fold and available for the trip to Swansea. What a mess.

Before we get into a little reaction, let's first endure a bit of a recap. It all started, publicly at least, the night that Arsenal beat Wigan to secure Sunderland's Premier League status last season. The players had been out watching the game, and Bardsley had decided to break a club curfew by heading out to a casino afterwards.

There, he gambled the night away - rather well by the looks of it, in fairness to him - before lying on the floor surrounded by cash in the early hours of the morning. Naturally, it was snapped by a casino patron and splashed all over the internet and press. 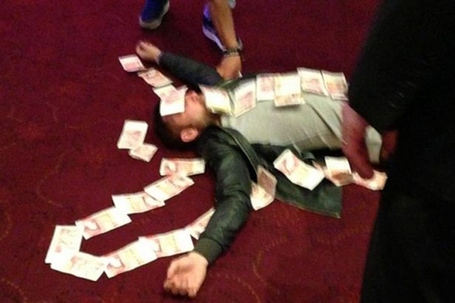 The following morning, Bardsley unsurprisingly turned up for training in a bit of a state and Paolo Di Canio later revealed he was almost glassy-eyed and unable to really mentally switch on and take instruction.

No apology came, but his girlfriend took to Twitter to plead his innocence whilst he himself was apparently complaining to the PFA about being disciplined.

Di Canio, of course, did what Di Canio does - he overreacted. Bardsley was publicly savaged to the press, bannished to the Under-21s, and told to find himself a new club. Then Bardsley did what Bardsley does - make a balls up of the simplest of things. He broke his foot in a second string friendly and a possible move away which would have brought it to a nice and neat conclusion was scuppered.

Ah well... get your head down, graft hard, leverage your decent standing amongst the support, and earn a reprieve eh Bards? That sounds like the sensible professional thing to do. Alas, no. Instead, he took to Instagram to mock Sunderland's opening-day defeat. The 'smother the flame by dousing it in lighter fluid' approach. 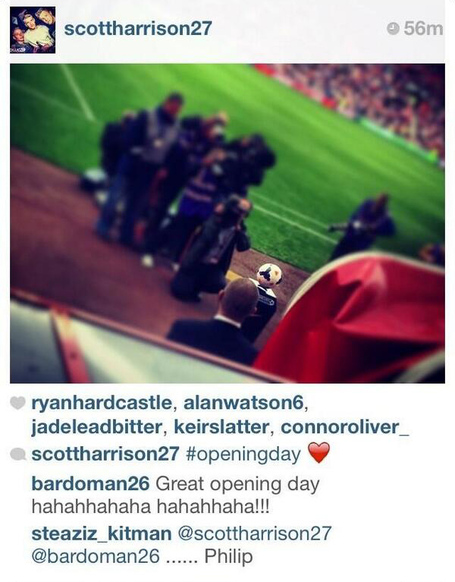 Immediate disciplinary actions followed, including the most pathetic half-hearted "well, I'm sorry you lot got upset but it's not my fault you're wrong" 'apology' you're ever likely to hear, and people returned to enjoying forgetting he existed.

I think that pretty much brings us up to speed.

It would be fair to say that the latest development has produced an emotive response from the fanbase. I'm including myself in that and make no apologies for the way in which the tale was recounted here. That was simply how I interpreted events and my disdain for Bardsley's catalogue of misdemeanors will be reflected above.

We took to Twitter to canvas further opinion, however, and it did show that there are those prepared to offer him a fresh start. Though, it must be stressed, those voices are very much the minority at the moment. In fact, if not for the rather colourful language this whole mess has provoked in people, the sample of 'nays' below would be considerably stronger.

My own opinion on the matter is a little mixed. I'm not a fan of Bardsley the player and that clouds my view to an undeniable degree. That said, whenever a new manager arrives my mind is always cast back to when Peter Reid arrived. Michael Gray had fallen from the first team picture without anyone really being bothered, and that was a fresh start we all benefited from.

But I just can't see me ever trusting Bardsley again with my beloved red and white. There are simply too many uncomfortable questions to which I don't have, and never will have, the answers.

Is he on our side or will he just look after himself instead? If Di Canio's opinion of him affected him to the point of reveling in a Sunderland defeat, could some terrace criticism have the same effect? Will he simply decide it would be funnier to see the fans who barrack him suffer? Why was there no apology for the casino? Why didn't he have the professionalism to just knuckle down like Lee Cattermole did and patiently work his way back into contention? Why was his empathy with the fans for seeing their team lose trumped by his pleasure at seeing Di Canio fail?

I get that he fell out with the manager, I really do. We've all suffered personality clashes at some point or another. But surely on match days we suffer together OR enjoy it together because we are all inextricably intertwined with the club itself? Well, we should be. Clearly, he is not part of it, and that worries me. That or he is when he wants to be and callously disconnected when he fancies it. That really worries me.

If he did play I wouldn't boo, mainly because I'm not a 4-year-old at a Christmas pantomime. The shirt is what counts. But I'd be uncomfortable with him out there representing me and my club. It would leave me feeling oddly disconnected.

Anyway, it's certainly an emotive debate, so please get involved. We'd love to hear your views in the comments section below, and be sure to vote in the pole. Would you welcome Phil Bardsley back into the fold or, like me, do you feel a line has been crossed and what is done can never be forgiven?