After each game game we get all nerdy and recap it looking at stats, graphs, figures and more in Talking Tactics. Here's a recap of the Swansea City game last night.

Martin O'Neill named an unchanged team for Swansea City's visit to the Stadium of Light. Alfred N'Diaye made his full home debut in a three-man midfield alongside Seb Larsson and David Vaughan. For the visitors, Itay Shechter made his fifth start of the season, leading the line which enabled Michu to revert to his role just behind the main striker.

Pablo Hernandez has been one of Swansea's most productive performers this season, but struggled to influence proceedings last night. A usually incisive passer, the Spaniard was Swansea's second least accurate outfield distributor, with just 17% of his passes being played ahead of him. Before being withdrawn on 66 minutes, Hernandez was similarly restricted when attempting to dribble - failing to beat a single opponent in five attempts. 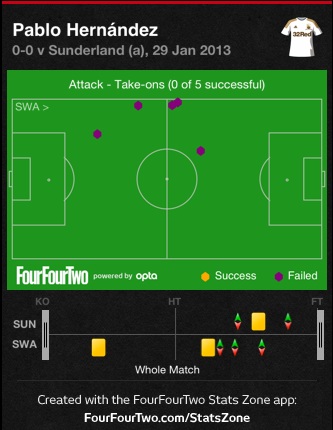 Another player notable by his relative inactivity was Michu. Back in the position where he started the season, he found space in between Sunderland's defence and midfield limited, particularly as a result of Sunderland's reluctance to allow their opponents take short goal-kicks. By preventing Gerhard Tremmel from playing a short pass to a team-mate, Sunderland were able to maintain compact and increase the likeliness of retaining possession as the Swans restarted the game with a long kick up-field.

However, Michu was able to isolate himself between the defence and midfield on occasion; his cut-back for Nathan Dyer was arguably the clearest chance in the game, before his guided header found Danny Graham, but the latter's shot was blocked by Titus Bramble.

Skip To The End

As well as being a track from The Futureheads, it seemed to be a policy of attack for the hosts. Craig Gardner, although Sunderland's most active in possession with 77 touches, was also the most careless - recording 24 total losses of possession. A number of these were the result of Gardner playing the ball long, largely to little or no success despite Steven Fletcher winning 11 of 19 aerial duels. However, Gardner's defensive contribution was again impressive, making a game-high four successful tackles. 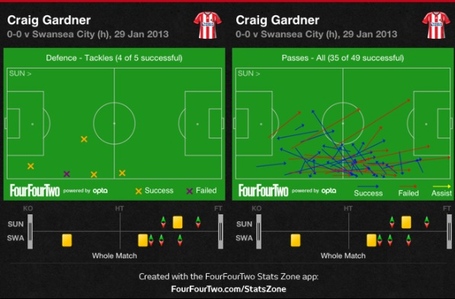 A lack of support to Fletcher proved to be Sunderland's faltering fate in the first half, but the side were just as effective in preventing Swansea's attacking focal point. Shechter's 25 possessions were the lowest of any starter, and was dispossessed twice before being replaced by Graham in the second half. Despite an ineffective outing, the Israeli striker was the subject of the game's talking point having gone down in the penalty area under a challenge from John O'Shea.

O'Neill's summary of the game is hard to argue with; Sunderland did not do enough to win the game, and for all Swansea's possession the same could be said. The visitors were most accurate with their passing in the final third (82%, compared to Sunderland's 56%), but were forced to make 13 more clearances.

Integral to Swansea's defensive performance were centre-backs Chico Flores and Ashley Williams. The pair was responsible for 12 of Swansea's 26 successful clearances, and the pair equalled the highest interceptions in the game with seven. 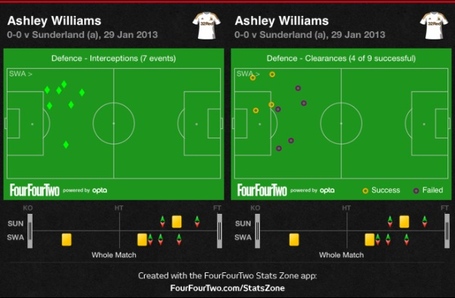 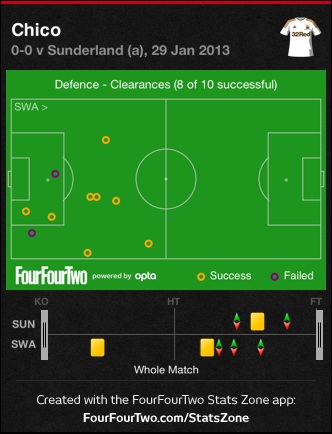 Much will be made of Sunderland's inability to create much - if anything - in front of goal, which considering recent form is hopefully an anomaly. Sessegnon's return to his more accustomed role behind the striker at the start of the second half generated an increase in urgency, but that was unable to be maintained against a structured Swans team. However, a fourth clean sheet in seven Premier League games is a significant base to move forward with.

Sunderland Vs Swansea City: As It Happened