We look back at the Liverpool game with a tactical eye. You think that might sound ridiculous given the showing, but there was more to the game than just us being complete morons.

Share All sharing options for: Talking Tactics: Liverpool (A) 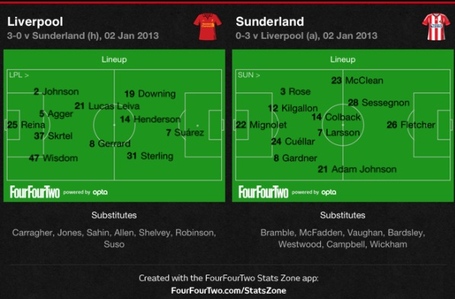 Martin O'Neill recalled Danny Rose to the starting line-up after he was ineligible to face Tottenham Hotspur. Matt Kilgallon, who had deputised at left-back, moved inside to cover John O'Shea's absence as Rose started in his accustomed position.

For Liverpool, former Newcastle United man Jose Enrique was ruled out through injury so Andre Wisdom was included at right-back, with Glen Johnson reverting to left-back - the theory being a more experienced man to counter the attacking threat of Adam Johnson.

It has been a feature in a number of games this season but it fell under the Anfield floodlights last night for all too see - Sunderland, both with and without the ball, are often bystanders. Facing a team with a rather fluid attack, any Sunderland player in possession generally looked bereft of options. In one of the only moments that Sunderland did have willing runners off the ball, they were able to unlock the Liverpool defence but James McClean fired wide.

But it was more apparent from our own goal-kicks; as Simon Mignolet restarted the game, too many are reactive rather than proactive, and their reactions were too slow last night, judging by the opening goal. 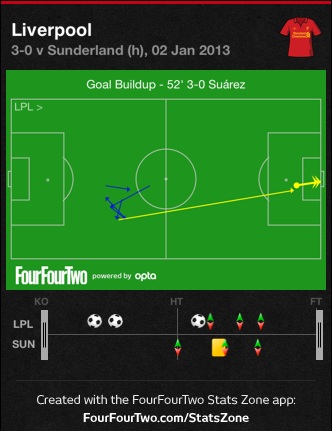 It escaped few that all of Liverpool's goals came from inside their own half. Whilst Steven Gerrard's pass for the third goal has been widely praised, it was Stewart Downing's run that ripped apart any semblance of understanding between Matt Kilgallon and Carlos Cuellar.

Despite being able to exploit from deep, Liverpool were just as clinical at the attacking end of the pitch - completing 75% of its passes in the final third (Sunderland managed just 51%). Again, Liverpool's movement not only stretched a laboured Sunderland back line but also allowed players to find space in between the lines and, had it not been for another stellar Mignolet performance, would have seen the score increase.

There were too key areas in which the teams contrasted in possession - long balls and dribbles. Luis Suarez's nine dribble attempts (three successful) surpassed Sunderland's total, whilst Gerrard's 16 long balls was just seven less than the visitors' total.

At times this season Liverpool have been too focussed on Brendan Rodgers' designed way of playing, but last night made room for two character traits of their two most important players. Again, this was aided by Sunderland's centre-back pairing being unable to cope with the opposition, but Liverpool must be credited for exploiting the weakness so thoroughly.

Away from the limelight, and the attacking third of the pitch, Lucas completed his first 90 minutes of the season for the hosts and did so with minimal fuss. He was Liverpool's top tackler, interceptor and managed 103 touches in the game (joint-highest with Gerrard) - confirming his influence in midfield. 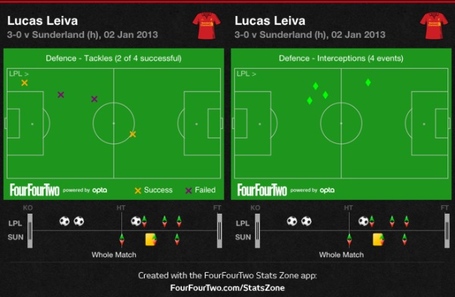 In addition, he completed 89% of his passes. Whilst that may not be a hugely impressive figure, it is when you consider that 49% of his passes were played forward, often generating attacks from within his own half. 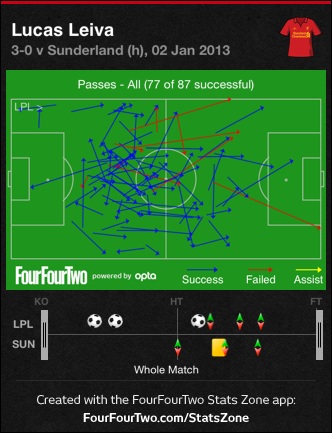 Ultimately, it was another game where defensive errors cost Sunderland dearly. Both Kilgallon and Cuellar will be disappointed with their feeble attempts at competing for the ball in the build-up to the first and second goals, and without the confidence Liverpool attained from a healthy lead going into half-time, proceedings may have gone differently.

On the face of it, Sunderland were competent tacklers (13-11 in Liverpool's favour), passers (87%-73% overall) and only made six more clearances than their opponents, but the devil is in the detail. That much of Steven Fletcher's night was spent with his back to goal - he did not record a single shot in the game - sums up Sunderland's inability to gain a significant foothold in the game, yet both McClean and Kilgallon had chances that were crucially missed. That argument could be subverted however, as Mignolet was the far busier of the two goalkeepers.

From a Sunderland perspective, too many simply underperformed, whilst the exuberance of Raheem Sterling naturally prevented Rose, a key player in joining attacks from deep, with the opportunity to do so (his 34 touches was one of his lowest totals of the season, whereas Craig Gardner opposite recorded Sunderland's highest amount of touches). Given that little changes were made throughout the entire Christmas period, it is not too much to suggest that this game - and this opponent's pace and movement - was simply too much, too soon. 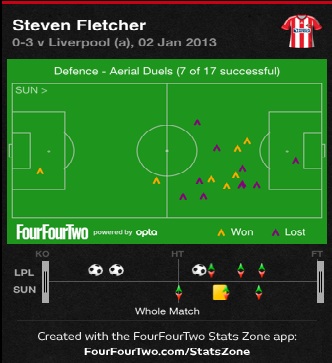 Liverpool Vs Sunderland: As It Happened