In a rare guest blog on the site we have Steve Feekins, one of the editors of FIFA.com here to take an in depth look at Adam Johnson's changing influence on the side.

Martin O'Neill has worked some motivational magic on his Sunderland troops this season. After an opening to the campaign which brought just one win in ten games, the Black Cats are now on a run of five wins in eight games, including wins against the champions and victories against some of the teams around them in the lower echelons of the table.

In stark contrast to those first ten games - with Sunderland drawing six matches in a defensively solid, if offensively uninspiring, run of fixtures - O'Neill's troops have now not drawn in ten. The last ten games have brought those six victories as well as four defeats, perhaps implying that the Northern Irishman is throwing a little more caution to the wind.

This seems to be borne out in the form of his front four, and especially Adam Johnson.

The marquee £10m summer signing from Manchester City had a lot to live up to, and struggled with niggling injuries and illness in his opening games - as well as being double-marked as the larger fish in the Sunderland aquarium, as opposed to the anchovy in the Etihad ocean.

However, Johnson's upturn in fortunes has coincided with the Black Cats' return to winning ways. It seems as though O'Neill has told Johnson to pick the ball up closer to the halfway line, as opposed to earlier in the season where the winger was starting too deep with the ball and losing momentum before reaching the final third.

This of course comes as a result of the team playing with more confidence with some wins under their belt, but these heat maps demonstrate Johnson's change in positional play. 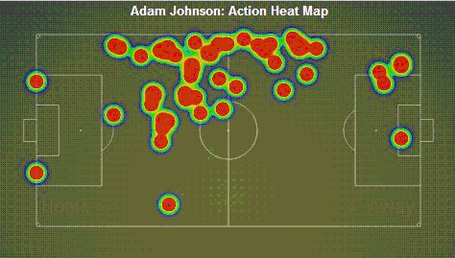 The Swansea match was Johnson's Premier League debut and, as you can see, he is consistently picking the ball up in his own half. According to Squawka, he did not attempt any take-ons in this game - meaning he either ran out of momentum before trying to take it round anybody, or feeling his options were limited by playing too deep.

The West Brom fixture was an example of Johnson drifting sporadically through a game, not really affecting proceedings. He attempted just one take-on (inside his own half) which was not successful. There are plenty of instances where Johnson picks the ball up in his own half as well, running out of steam before having the opportunity to dribble past an opponent.

The Norwich away match showed the beginning of the shift in Johnson's attacking impetus. He spent a lot more time in the opponents' half, completing all of his take-ons in the opposition half. Even though Sunderland lost that day, the Black Cats looked more of a threat and this was, in part, down to Johnson attacking his full-back further up the pitch - forcing him back.

The best way to demonstrate the change in Johnson's play is by highlighting the two Wigan fixtures. On the left is the home fixture in September. Johnson picks up the ball in his own half on plenty of occasions - also tending to drift across the pitch with no real purpose. On the right, Johnson sticks to one side of the pitch, picking the ball up in the opponents' half and driving into the final third a lot more - owing to Sunderland's attacking threat throughout the match. This is also shown in his attempted take-ons (below) which are generally higher up the pitch in the away fixture and also much closer to the wing.

Overall, it would appear that with O'Neill asking Johnson to pick the ball up closer to halfway, the winger is getting chalk on his boots and taking on his full-back as a result. This means the whole defence is pushed back, giving space for Sessegnon to exploit in between the midfield and defence. With the defenders on the back foot, Fletcher is closer to the penalty box - giving him more opportunities in the area (as we saw against Wigan at the weekend). In fact, due to the new attacking impetus, Fletcher's shot accuracy in the last eight games has been 73%, as opposed to 59% in the opening 13 fixtures.

Even though it is a subtle attacking change, which is not limited to Johnson, it gives hope to those Sunderland fans who wished to see O'Neill replicate the exciting counter-attacking football that he brought to Aston Villa. With the recent additions of N'Diaye and Mangane, it would appear that O'Neill recognises the need for a stronger defensive base if his attackers are going to push further up the pitch. For better or worse, the yawn-inducing matches of earlier in the campaign will be a distant memory in the coming months if MON continues to encourage his flair players.