Time for your usual tactical recap of the weekend’s game, with a subtle change in proceedings bringing a fifth win in eight in the league.

Share All sharing options for: Talking Tactics: Wigan Athletic (A) 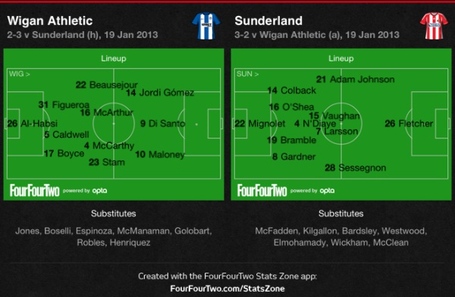 Martin O'Neill handed Alfred N'Diaye his first start as a Sunderland player - and in doing so adjusted the shape of the team - for the visit of Wigan Athletic. The French midfielder was deployed as one of three central midfielders, with Stephane Sessegnon operating on the right-hand side. Wigan made two changes from the side that started in the 1-1 draw against Fulham, as Ronnie Stam and Jordi Gomez came in for Ivan Ramis and David Jones.

As a result of O'Neill's tactical tweak, the emphasis was shifted towards what Adam Johnson is best at. With an extra man in midfield, the defensive responsibilities weren't as heavy on Sunderland's wide players, effectively leaving Johnson to his own devices. In the first half in particular, Johnson's high starting point proved to be the source of the visitors' production; it was he who dispossessed Wigan in its own half to win the free-kick that ultimately lead to Craig Gardner's penalty, and Johnson again fed N'Diaye before the latter crossed for Steven Fletcher to put Sunderland in front. 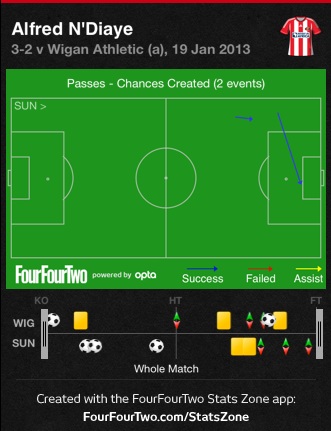 Much had been made of N'Diaye's physical presence upon his arrival, but early indications suggest he may be able to offer more than that. His link-up play with David Vaughan in the first half depicted a man far more comfortable further up the field, and made two key passes which proved to be Sunderland's highest (as well as the aforementioned assist). The one blemish on a dominating first half was that he was unable to direct Fletcher's flick-on underneath the crossbar. 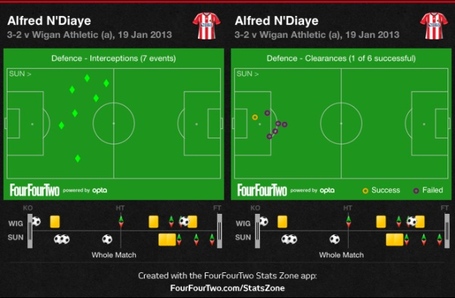 But his defensive contributions were even more impressive; his seven interceptions matched the rest of his team-mates in that department, with his six clearances only bettered by John O'Shea. Statistically, N'Diaye's performance stood out, but the greatest recognition was afforded to him by his team-mates in the first half. They seemed so at ease with him in the middle that it simply enabled the rest of the midfield to play to their respective strengths.

You Get What You Pay For

Fletcher's two expertly-taken goals have been well documented, but this was arguably his most complete performance in a Sunderland shirt. As well as leading the goal tally, he won a game-high six aerial duels and made the most passes for the visitors - the support Fletcher received is another endorsement to N'Diaye's presence. 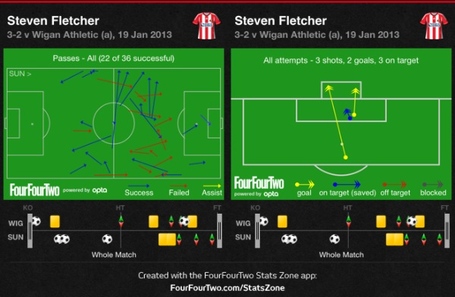 The fluidity of Wigan's play was the main issue to be addressed. A good indicator of this is the initial line-up image; Shaun Maloney started the game in the position just behind the striker, and found space - and the ball - on very few occasions (his 57 touches was considerably the least of any Wigan midfield player, despite a prominent second half).

It was only when Roberto Martinez adjusted his side that Maloney was able to influence the game in Wigan's favour. Maloney thrived in the second half by capitalising on the space afforded to him on the flank to create chances - his five key passes was the highest of the match - and Sunderland were fortuitous to some regard, needing Simon Mignolet and the woodwork to deny the former Celtic man from scoring himself. 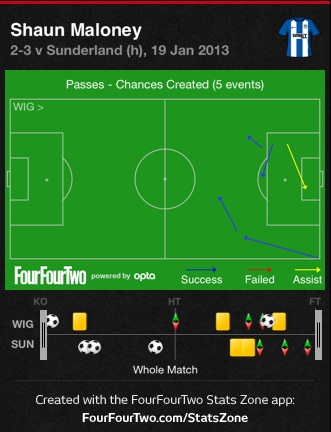 With a significant amount of traffic coming down Sunderland's left flank (45% of their attacks were directed to that side of the pitch, Wigan sought to produce from the same area, through wing-back outlet Jean Beausejour and Maloney drifting into wide areas in the second half. Focussing on the former however, it is clear that Sunderland did well to nullify the threat of the pacy Chilean. 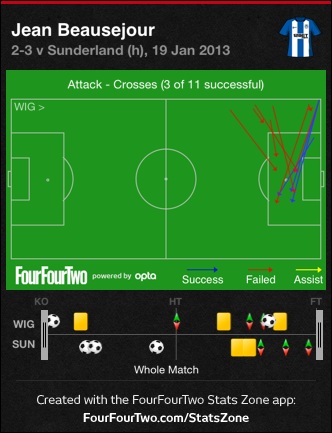 In open play, just one of his crosses found a team-mate, although it eventually lead to the opening goal, and only dribbled once successfully. The clearest indicator of Wigan's production line faltering is that Franco Di Santo managed just 22 touches - which was the joint-lowest of all the starting players.

Despite conceding much of the possession in the second half, Sunderland did a reasonable job of preventing Wigan from finding a way back into the game. Much of the ‘dominance' the home side enjoyed was in front of the Sunderland defensive line, restricting Wigan to shooting opportunities from further out - 52% of Wigan's shots came from outside the box, whilst 82% of Sunderland efforts were taken from 18 yards or closer. That number is skewed by the volume of chances Wigan had in the second half, but clear-cut chances were limited to Angelo Henriquez's equaliser and Mauro Boselli's miss. 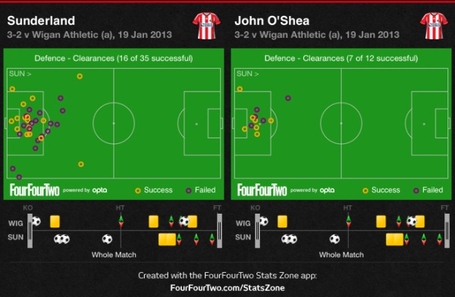 The above image conveys just a handful of clearances from the six-yard box, indicating that whilst Wigan were able to move the ball freely in the opposition half, it was more pressure by possession than a terminal situation.

One clear difference was the role of Sunderland's central defenders. Usually when selected, Titus Bramble is deployed as the primary source of defence, with the experience of John O'Shea left to anticipate anything that does not get cleared. However, O'Shea, either tactically or a result of circumstance, found himself on the front line defensively. His 12 total clearances and 7 successful clearances were game-high totals respectively - although a lack of concentration forced him to scuff an unsuccessful clearance to Maloney, which contributed to Wigan's second goal.

O'Neill's decision to absorb Wigan pressure and counter attack should have returned dividends as both Sessegnon and Sebastian Larsson had clear opportunities to ensure victory for the visitors. Ultimately, the way Sunderland were set out, and how they responded to trailing 1-0 after only five minutes, proved to be key components of their third away win in the league this season.

Wigan Athletic Vs Sunderland: As It Happened