Saturday saw arguably Sunderland's most assured performance of the season so far. With any nerves settled by Seb Larsson's early thunderbolt, the Black Cats controlled the game against West Ham, and were well worth their 3-0 victory. 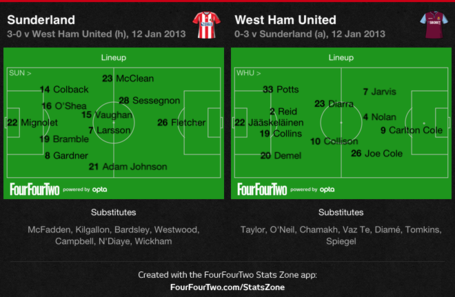 The two sides lined up in a similar manner. Each midfield consisted of two deeper lying central players, with a more advanced playmaker expected to be the main link between defence and attack. For Sunderland this was, as ever, Stephane Sessegnon, while Kevin Nolan took up the role for the Hammers.

Though the graphic above suggests otherwise, Sunderland, by virtue of their dominance of the game, had the more attack-minded wingers. Matt Jarvis and Joe Cole struggled to make an impact as much of West Ham's play broke down before reaching them, whereas, for the home side, James McClean and Adam Johnson were heavily involved throughout.

Although this was without doubt an impressive attacking display from Sunderland, one of the main reasons for their success was how they performed without the ball.

The home side never let Allardyce's men settled, employing an intense, high pressure style that looked to harry the Hammers into misplaced passes. The huge success rate of tackles from Sunderland - 21 out of 24 attempted tackles - reflects this, as does how their tackles came all over the pitch, including seven successful challenges in the West Ham half. 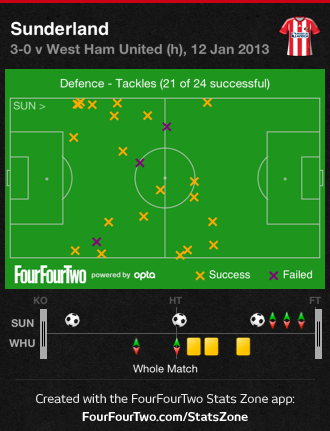 One of the key men behind this was David Vaughan. In his first Premier League start of the season, the Welshman performed excellently alongside Seb Larsson (who, for once, was outstanding in central midfield). Vaughan was impressive on the ball, consistently seeking to move the ball forward with space. But a crucial element was the defensive prowess he offered. He managed a 100% tackling success rate and contributed tow timely interceptions; up against the rather brutish qualities offered by Alou Diarra and Kevin Nolan, Vaughan never allowed his opponents time to settle, and was integral in Sunderland dominating the midfield battle. 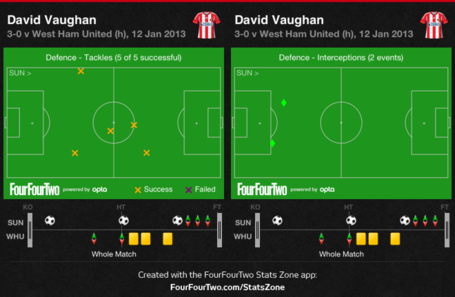 It seems to be a maxim on Wearside that, should Stephane Sessegnon perform well, the rest of the team likely will too. Despite still being woeful in front of goal, the Black Cats' attacking midfielder put in his best performance of the season, completely outshining opposite number Kevin Nolan.

Sessegnon was economical in possession but also adventurous in attack, and was the main focal point as the Black Cats surged forward with regularity. With Vaughan moving the ball to his feet quickly, the Beninese was able to turn, get his head up, and assess the options available to him. Though Vaughan and Larsson have already been credited, their role in moving the ball forward with speed cannot be understated. Sessegnon has often been criticised this season but, as shown on Saturday, if the ball is moved to him quickly enough, he has the potential to cause any side problems. 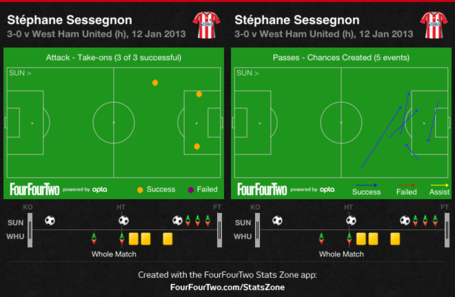 Another interesting point was the role of Sunderland's full-backs. We have seen signs over recent weeks that Martin O'Neill is more and more comfortable with giving his wide defenders more authority to move forward, as opposed to focusing solely on defensive duties, and Saturday's game was the biggest indication of that yet.

In particular, Jack Colback showed what he can offer from left-back. Often struggling to move the ball forward from midfield, Colback has little choice but to go forward when playing in defence. The lack of another option is to both his and his team's benefit - as stated plenty of times in this column, Colback has the ability to be an attacking threat, he just needs the confidence to do so.

On Saturday, Colback often found himself en route to the West Ham byline. As shown below, he offered a far greater attacking threat than Craig Gardner, who himself had a decent enough game. It is somewhat strange when we consider that, on the left, James McClean is the Sunderland winger who is most willing to surge to the line, whereas Adam Johnson is more inclined to come inside and move from deeper positions. What the Black Cats could benefit from is a right-back who is happy to play in a more advanced role. That said, if Gardner, having proven his defensive abilities, is given the similar freedom by his manager that Colback was against West Ham, the side could yet see two attacking full-backs deployed. 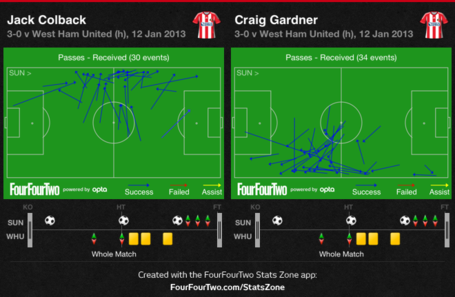 There were no bad performers for Sunderland on Saturday. In defence, John O'Shea and Titus Bramble marshalled Carlton Cole with ease; substitute Marouane Chamakh even more so. The deciding factor in their dominance was their control of the midfield. With Larsson stepping up his game - no doubt fearing being usurped by new boy, Alfred N'Diaye - and Vaughan excellent in all aspects, Sunderland were able to dictate play in the middle in a game where many might have expected the visitors to have the upper hand in the centre. Indeed, unless he was unfit, it seems a strange decision that Sam Allardyce did not select Mohamed Diame instead of placing him on the bench: the lofty midfielder has often played well against Sunderland's diminutive midfield.

From one to eleven, the Black Cats deserved this victory. They were quicker to the ball than their visitors, more adventurous in attack and better at moving the ball forward into dangerous areas. In truth, it is unlikely they will enjoy a more comfortable victory in the Premier League for quite some time.

Sunderland Vs West Ham United: As It Happened