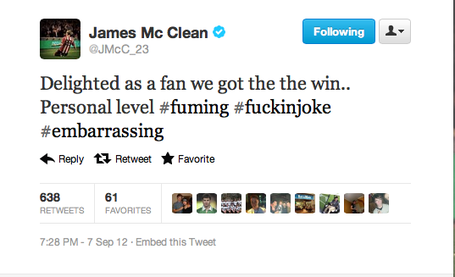 So there it is. Some seem to think it didn't really happen, but if very much did.

We as fans were left scratching our head at how James McClean was left out of the Ireland side once again. It seemed to defy all sorts of logic to not pick a player in decent form and widely regarded as a star of the future for the side, however, it is something that happens far too often at international level. It can be very frustrating.

Then there's the increasing use of Twitter. A platform available for everyone to say what they're thinking at any given moment, often without any risk (unless you're in a position of power) and incredibly often people "tweet" without thought. McClean seems to fall into the latter category...

I'm not going to castigate McClean here. It must have been a thousand times more annoying for him to see Simon Cox and Jonathan Walters make futile attempts to play his position while he twiddled his thumbs in tonight's last-gasp 2-1 win over Kazakhstan.

However this isn't the first time that McClean has said something that could potentially get him into bother. There's been instances where he's gone as far as deleting his account, only to come back later, after getting involved in some back-and-forth with Northern Ireland fans after he opted to play for the Republic at senior level.

The most recent following that being an instance where he told what we'll describe as an 'off colour' joke which went down worse than us in the 15-point season.

We'll try and take some of the positives here. First of all, it's good to see some fire in the player, that he's not happy to just sit on the bench and be involved and he has the self belief to think he's good enough to start. Secondly, was he right to tweet it in the first place? A 'normal' aka non-footballer - would probably have been saying the same. I'm sure the same sort of thing has been thought and even said out loud at many a Sunday League game.

This however isn't Sunday League, this is the Premier League, and no matter how much you tweet inane bollocks about going to Nando's or playing Call Of Duty, you're still in the public eye and people scrutinize every word keyed in. When something like this happens, it goes stratospheric.

It's clear that Twitter isn't for everyone, and this might be the final straw for McClean. Or at least we'd hope it is. We can only hope at this stage he leaves it alone and keeps his head down and continuing to work hard.

Nowadays Twitter is every bit as big as a text message was a while back. Some seem to forget though that you're saying this to EVERYONE and not just a select group of friends. It's highly unlikely on the back of this Giovanni Trappatoni will be thinking "Christ, I didn't know he felt like this - I'd better play him!"... if anything it will just extend McClean's exile from the starting eleven, if not entire squads.

There's one third "wildcard" option here, which McClean could potentially use to excuse his behaviour - That the tweet was merely expressing that has a fan, a win is a win but from a professional point of view, they should be better than two last minute goals against Kazakhstan. Given this was later deleted by McClean, it's unlikely this is the case, even if it is the defence used.

The only potential plus side? He comes back with renewed vigor and determination to make himself even more of a star, playing so well he simply cannot be ignored any further. While he's playing good now, he's played better. We're still early in the season and he's nowhere near peaked yet.

James - Please, just stop tweeting. You're a great player, a passionate guy, but this just isn't for you. Put the phone/laptop/iPad down and get the attention on you for the right reasons.

(And before anyone pipes in with "well this won't help" - the story is already all over Twitter plus the websites of Sky Sports, Goal and ITV with no doubt more to come tomorrow)