Share All sharing options for: Talking Tactics: Swansea City (A)

Sunderland's trip to Swansea on Saturday was an interesting one. Following the Swans' superb start to the season, the Black Cats would have been happy to take a point prior to kick-off. A 2-2 draw achieved that, but feelings after the game were mixed.

With two goals from two chances, Steven Fletcher went some way to justifying the club's grand outlay on his services. However, Fletcher apart, Sunderland were poor - even the home side going down to ten men saw little improvement in the performance of the Wearsiders, and a point was the most they deserved. Still, at the end of season, they will no doubt look back on this as one point gained rather than two lost. 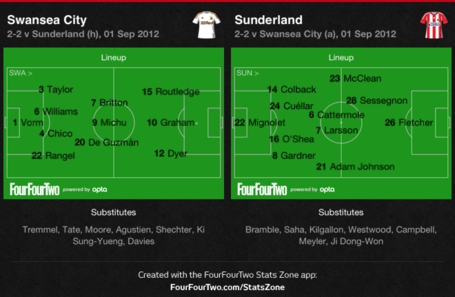 Martin O'Neill was consistent in his line-up, making just two changes from the side that overcame Morecambe on Tuesday evening. Simon Mignolet replaced Keiren Westwood in goal, while Carlos Cuéllar came in for Titus Bramble in the centre of defence.

This left Sunderland deploying a 4-5-1 formation, as they are expected to for much of the season. With Kieran Richardson having departed for Fulham, Jack Colback continued at left-back; Cuéllar, John O'Shea and Craig Gardner made up the rest of the back four. In midfield, Lee Cattermole and Seb Larsson anchored the centre, while Stephane Sessegnon took on a more attacking role behind central striker Fletcher. James McClean and new boy Adam Johnson took up residence on the left and right wings.

Michael Laudrup's side opted for a more attacking 4-3-3 style. The men from Wales are now well known for their possession-based football, but have thus far this season added to that by increasing their firepower in front of goal - a direct result of Laudrup's set-up.

Michel Vorm's goal was protected by a back four of - from left to right - Neil Taylor, Ashley Williams, Chico Flores and Angel Rangel. Taylor, unfortunately, went off with a nasty injury on twenty minutes, leaving youngster Ben Davies to fill his spot. Swansea's midfield consisted of a deep-lying Leon Britton, with Jonathan De Guzman and Michu pushing on ahead of him. Wayne Routledge and Nathan Dyer were selected as highly advanced and interchanging wingers, with Danny Graham the focal point in attack.

The Importance Of Lee Cattermole

One thing Saturday highlighted for Sunderland was the sheer importance to their cause of their captain. Lee Cattermole has split opinion since arriving on Wearside three years ago, but his detractors should only re-watch this weekend's game for proof of his value.

Cattermole left the field around the forty-minute mark with a dead leg, and the impact this had on the game became clear immediately after half-time. Sunderland may well have scored both of their goals after their captain left the field, but they also conceded genuine chances to the home side too - something which had been few and fair between during Cattermole's time on the field. 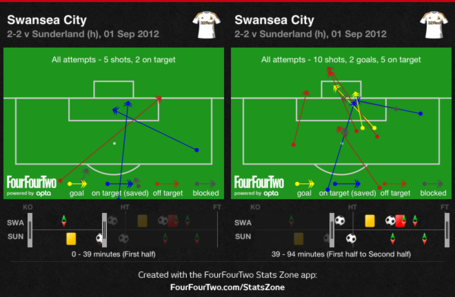 As shown, prior to Cattermole's departure, the Swans managed just a single shot from inside the Sunderland area. Following his replacement by David Meyler, that figure skyrocketed, as they managed a further eight efforts from inside the eighteen yard box - two of which resulted in goals. 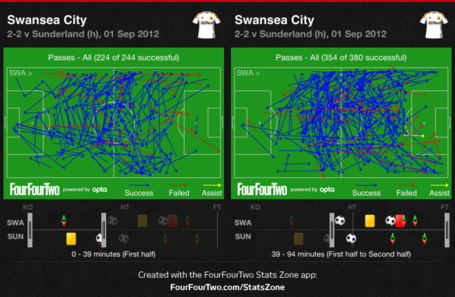 The above graphic helps us see why this was the case. Though Swansea's passing is typically accurate throughout, when Sunderland's captain was on the field their movement of the ball came in decidedly deeper areas - their forays into the final third were sparing. However, following Cattermole's injury, it is clear that Swansea were able to play higher up, getting into more promising positions, dominating the centre, and pressing the Sunderland defence.

Cattermole, faced with the prospect of two attack-minded midfielders in Michu and De Guzman (indeed, Michu has been mistakenly labelled by many as a striker in recent weeks), started a bit erratically, chasing the ball into deep areas. This was perhaps in the hope that Seb Larsson would fill in for him to break up the play. However, once it quickly became clear that Larsson was ill-suited to such a role - the Swede was anonymous throughout - Cattermole went back to being a disciplined deep-lying midfielder, breaking up the play effectively and denying Swansea the chance of getting in on goal.

David Meyler is by no means a poor player, but the difference between him and the captain in quality was clear. Statistically he didn't have a bad game - he managed an 86% success rate on his 21 attempted passes and contributed three interceptions - but it was positionally that he was lacking. Meyler was unable to shield his central defenders as Cattermole can, and he and Larsson soon found themselves overrun.

Cattermole is often moaned at for not moving the play on, but what he did with the ball on Saturday was impressive too. His 14 attempted passes were all successful, and 36% of those were forward passes. By comparison, only 14% of Meyler's passes went forward; 30% of Larsson's did.

The addition of Adam Johnson to Sunderland's ranks confirmed a long time tactic of Martin O'Neill's: utilising the wings effectively. Unfortunately, on Saturday, Sunderland's two wingers found themselves outclassed by their opposite numbers. 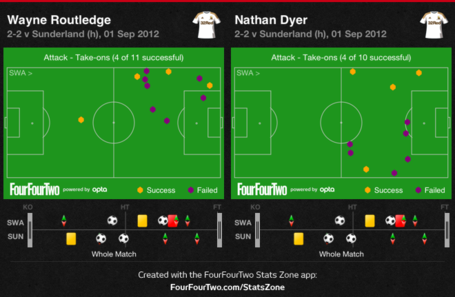 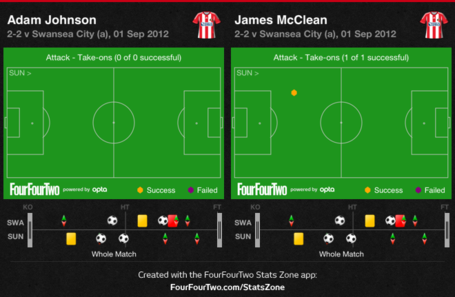 The above graphics show the attempted 'take-ons' by each of the four wingers on show at The Liberty Stadium, and the disparity between the two sides is striking. Where the Swansea graphics are littered with attempts, Sunderland's two wingers attempted just one take-on between them in the entire game.

This can be put down to poor individual performances, as well as a general reflection of the course of the game. Swansea, more assured in possession, and dominant territorially following Cattermole's departure, were able to supply their wingers more often, who were in turn more willing to risk losing the ball by taking on a defender.

It should also be noted that the vast majority of successful take-ons for Swansea came against Sunderland right-back Craig Gardner. Gardner has looked assured at right-back previously, but if sides see him as a weakness and target him - as Swansea evidently did on Saturday - O'Neill may rethink his decision to play the former midfielder there.

Aside from Steven Fletcher's prolific nature in front of goal, the one real upside for Sunderland was an improvement in their distribution from the back - something Fletcher himself had a vital role in. 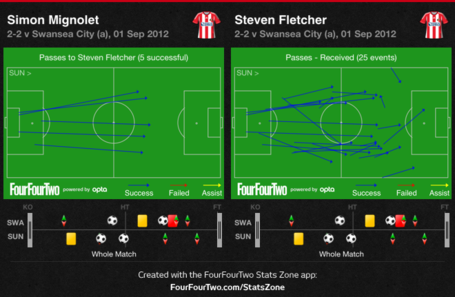 Simon Mignolet's distribution has been regularly critiqued in this column previously, but it was much improved at the weekend. Much of this was down to Fletcher, whose aerial presence allowed him to latch onto Mignolet's long kicks upfield. Of the 25 passes the striker he received, one-fifth came from his goalkeeper. In turn, this drastically improved Mignolet's passing accuracy to 61% - across all of last season it was a miserly 38%. 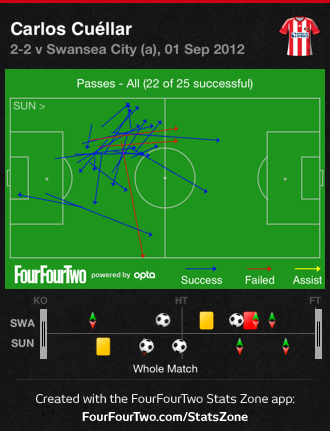 In addition, the introduction of Carlos Cuéllar points to O'Neill building a defence more inclined to play the ball out from the back - using two central midfielders at full-back is further proof of this. On Saturday Cuéllar was successful with 88% of his passes, with the majority of them going wide to either Colback or McClean as opposed to lengthy hoofs into the Swansea half.

A poor performance from Sunderland, but one that conversely provided them with a very encouraging positive. Steven Fletcher played well, but found himself poorly supplied but his teammates. When he did get the service, he finished off chances with composure and ease - exactly the reason he was signed by O'Neill.

The most glaring thing to come out of this game was the importance of Lee Cattermole. Prior to his departure, Sunderland had been poor but relinquished few chances aside from long range efforts. This changed drastically once he left the field, and O'Neill will be happy that his captain will once again be fit for the next game against Liverpool in two weeks.