A Little Look At The Big Changes Coming To Roker Report

Just a little roundup of things that are changing around these parts!

Share All sharing options for: A Little Look At The Big Changes Coming To Roker Report

Much like everyone else in the world, we have to move with the times - And we're no different as tomorrow we prepare to launch Roker Report version 3.0 - Harder, Better, Faster, Stronger as two French robots once muttered.

Yes, this will be the third incarnation. As some of the hardcore fans might have noticed we started out on just some generic Wordpress site before being picked up as a member of SB Nation where we find ourselves today.

As the site grows, so does our host service, and they've got some exceptional stuff lined up. So let's have a look at it eh?...

First of all we mentioned that things are going to be faster, and they will as there's better design and more firepower behind SB Nation, meaning you'll get to the content you want quicker. That's better for all of us.

There's also the fact that as people use the internet more on their phones, you'll get the same quick-loading experience that everyone on an actual computer does. Equally the site will shift in style, but retain the awesome new design too whether you're a computer, a tablet or your phone.

Speaking of the sexy new look, here are some of the screenshots we've been allowed to bring you before tomorrow. Obviously these are not shots of Roker Report so you'll have to use some imagination, but I assure you, things are going to be pretty sexy when this little lot have the Roker Report/Sunderland twist... 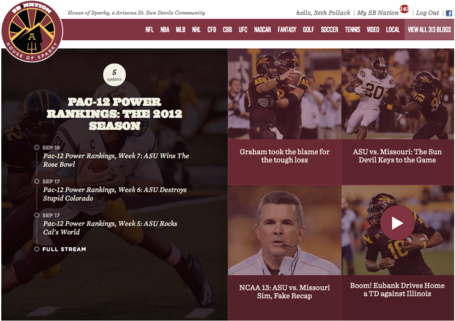 Above is an example of the new Cover system. This not only looks great but has numerous advantages.

First of all we control what goes there. A bit like a magazine, you'll get the highlights of the site there first. This example is displaying five stories, and we can have on their anything from 1-5 stories - meaning that the content you'll want to read is right there for you.

On the left of the screen you'll see a list of stories with dates. This is a new feature called "StoryStream" and in this we can add updates to an existing story. A great example of how we could have used this earlier in the season is the Steven Fletcher saga. rather than putting reminders in posts about older ones, you could have had the whole timeline of Steven Fletcher news in one place, right at your finger tips.

We intend on using this on a game day too so that you can get the preview, the report, player ratings and more all in one area. We'll also obviously be updating news items with updates if necessary. You'll enjoy it, trust us.

Here's an example of how a stream will look once you click on it for a better idea:

Pretty sexy huh? On a whole the site will be much, MUCH better organized. There'll be sections which allow you to access older things such as every Match Report we've ever done, Cult Heroes and more.

Also on the Cover we can add "Breaking News" if necessary, so if something major happens we can take you right to it with just one click.

It will still be all the same written content you've come to expect from the site, and we're continuing with our push to become the number one stopping point for all things Sunderland. We're hugely excited about this, and we hope you will be too once you see it when it goes live tomorrow.