Sunderland's first home game of the season saw Liverpool arrive at the Stadium of Light, still reflecting on the findings of the Hillsborough Independent Panel. As such, a tough match was expected against a club and a community galvanised by what had unfolded in the week preceeding the fixture.

The verdict at the Stadium of Light was that a draw was a fair result, despite a lot of Liverpool possession that went without quality in the final third. Sunderland, on the other hand, almost went to the extent of reminiscing of the Darren Bent days with a one-chance, one-goal approach.

But there's a lot more to it than that, so why not stick around as we delve a bit deeper into the game... 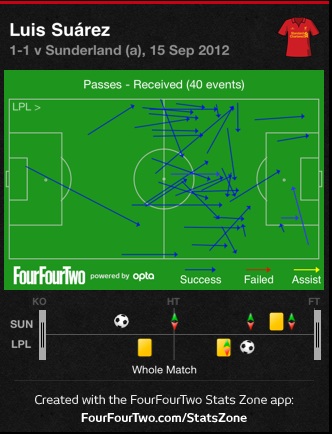 From an early point in the game, it became apparent that Sunderland had not specified a player to man-mark Luis Suarez, enabling the Uruguayan to drop ‘between the lines' and find both space and the ball. The following image depicts the areas in which Suarez received the ball from a team-mate, with a large cluster of passes ending up at the striker's feet, just outside the penalty area. On two occasions in the first half, this led to shooting opportunities - both for Suarez himself and Jonjo Shelvey - which fortunately were dragged wide of goal.

Gardner Is All Right At The Back 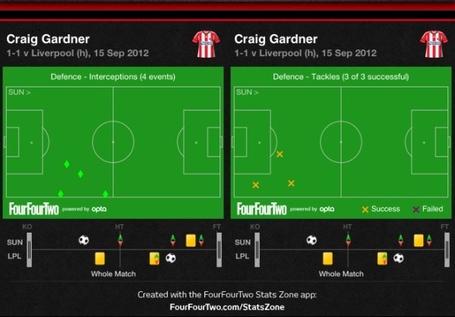 The heading is somewhat putting it kindly when you consider that he succeeded with all of his tackles, and his interceptions (graph, above). The last of the four blossomed into a counter attack which ended in an over-hit cross. His goal-creating decision to size up Suarez, and then wriggle beyond him, was the element of luck that his performance ultimately deserved. 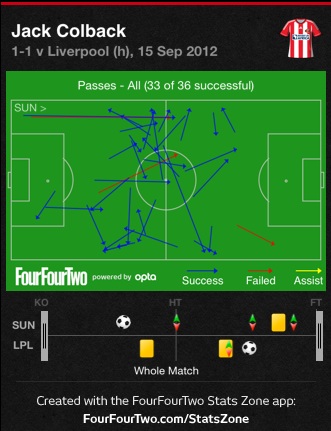 In direct opposition to two of the men that have made passing statistics all the rage (Joe Allen and his manager), Jack Colback's involvement in the game could not have gone unnoticed. He recorded a 92% pass completion rate, edging Allen despite looking to go forward more often. Colback's awareness has been missed whilst he has filled in at full-back, which was best displayed by his sweeping pass to Seb Larsson that opened up the pitch, before Craig Gardner surged forward to set up Steven Fletcher's opening goal. 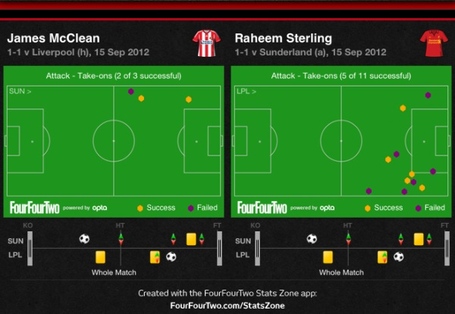 As we see from the graph, Raheem Sterling was the far busier of the two highly-rated wingers. With Liverpool enjoying almost twice as much possession, the assumption would be that the home side simply did not get the ball to James McClean as often as it would have liked. A glance at McClean's passing statistics shows that 52% of the passes he received were then played backwards, indicating a reluctance to continue running at Martin Kelly. Considering the possession imbalance, it was surprising that McClean did not want to make the most of the opportunities afforded to him. Similarly, McClean only crossed the ball on three occasions, none of which finding a Sunderland player.

Fletcher Key In Both Boxes, But In Between?

In addition to his well-taken goal, Fletcher also made two telling defensive contributions in his own box - which ranked him just behind John O'Shea in successful clearances (excluding Simon Mignolet). However, and this is just something to be aware of in the coming weeks, Fletcher was the most guilty when it came to surrendering possession, managing just a 44% pass success rate. To his credit he was one of the more forward-thinking players on display, with almost half of his passes being played forward - more than Larsson, Sessegnon or McClean - but in a system designed to absorb pressure before responding with gusto, more care of the ball needs to be taken.

Sunderland remains unbeaten having faced three credible opponents. Despite that, it offered very little in the way of attacking a Liverpool side that had conceded seven times before this game. Fletcher took his one chance, which although pleasing, is somewhat concerning given that he was unable to even test Pepe Reina throughout the final 60 minutes.

Should the match fitness issue be valid, something that Martin O'Neill again reflected post-game, then the game would have done the world of good for our midfield, and Fletcher - who had a limited pre-season - which should lead to a more lively performance in attack from Sunderland next week.