Sunderland travelled to The Emirates on Saturday for an unenviable opening day tie with Arsene Wenger's Arsenal. The Gunners have - in contrast to Martin O'Neill's men - had a busy summer, with Lukas Podolski, Santi Cazorla and Olivier Giroud their three most notable arrivals.

Despite their new abundance of firepower, the men from North London could find no way past Sunderland's stoic defence. For all the nerves that their relative lack of transfer window activity has brought, the Black Cats produced an excellent display of resolve and discipline, and were rewarded with a 0-0 draw and a point.

O'Neill, as predicted by many, opted for a 4-5-1 formation. Simon Mignolet lined up in goal, behind a new look defence of Kieran Richardson, Carlos Cuéllar, John O'Shea and Craig Gardner. In midfield James McClean and Fraizer Campbell were preferred out wide, with Seb Larsson moving into the centre alongside Jack Colback and Lee Cattermole - though the latter played a clearly deeper role than his teammates. With Louis Saha far from match fit following his signing on Thursday, Stephane Sessegnon occupied the lone front man role.

Arsenal lined up in a similar, but far more attacking formation. Wenger's system was more of a 4-3-3, with him looking to make the most of his new riches. Lukas Podolski led the line, flanked by very attacking wingers in the form of Theo Walcott and Gervinho. Behind them, Cazorla offered a direct combatant for Cattermole by playing in an attacking midfield role, with Mikel Arteta and Abou Diaby sitting deeper behind him. Alex Song, whose transfer to Barcelona was confirmed after the final whistle, did not figure. Wojciech Szczesny was in goal, protected by a defensive four of Kieran Gibbs, Thomas Vermaelen, Per Mertesacker and Carl Jenkinson.

Undoubtedly, the most important individual battle on Saturday came just in front of Sunderland's back four. Lee Cattermole has came in for much criticism across his career - not all of it unwarranted - and Arsenal's signing and immediate deployment of Santi Cazorla meant he was in for a testing opening day of the season.

With Cazorla used by Wenger as the main link between midfield and attack, bringing wide men Gervinho and Walcott into the game too, Sunderland's hopes were hugely reliant on Cattermole producing a disciplined display.

Thus, their eventual clean sheet was down in no small part to their captain. 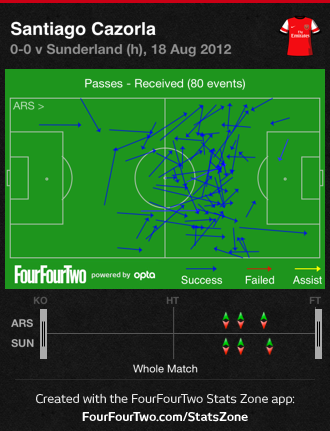 Cazorla still exerted a huge influence on the game. In the opening half he was the standout player, dropping effectively between Sunderland's back four and midfield five. Cattermole, in the early stages, was not tight enough to the Spaniard - the good work of O'Shea and Cuéllar agains a poor Podolski nullified the repercussions of this. 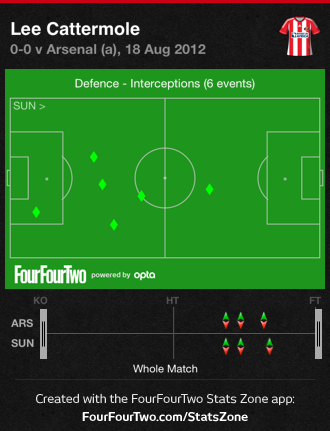 However, Cattermole soon tightened up. Ultimately, he wound up making six interceptions - a game high, and over a quarter of his team's total. As shown, Cazorla still received the ball eighty times, a hefty figure for any player. But what is notable is that he was very rarely able to get beyond the invisible boundary lain down by his opponent. Cattermole followe Cazorla everywhere, but he refused to let himself be dragged too deep, instead marshalling the edge of the final third with supreme authority.

There was the odd lapse, but little more. Once in the first half Cattermole found himself pulled too far upfield, which allowed Arsenal to sneak in behind and have a shot on goal, but other than that he scarcely put a foot wrong. 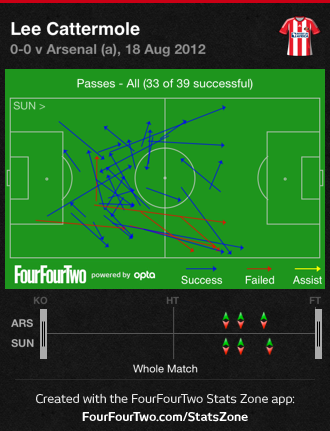 He was also good at keeping possession on Saturday, a problem many have identified him with previously. His 85% passing success rate was excellent and, intriguingly, he seemed to only ever struggle to find his man when he aimed balls to the right. This may point to the performance of Fraizer Campbell, who was largely anonymous. In turn this can be put down to the excellent display of the Arsenal full-back Kieran Gibbs. Gibbs contributed five interceptions, three successful tackles (a 100% success rate) and generally played quite high up, squeezing Sunderland's right side.

The Need To Keep Kieran Richardson

Much has been made of James McClean's importance to Sunderland's fortunes this coming season, and Saturday showed no reason to downplay this. McClean actually didn't have a particularly good game - he misplaced almost 40% of his passes - but the aura surrounding him means teams, including Arsenal, are unwilling to allow him space even when he is having an off day. 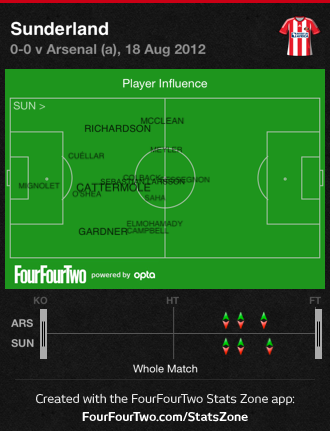 As shown in the above graphic, Richardson's influence in the game was on par with Cattermole's. 'Richardson to McClean' was Sunderland's most frequent pass combination, occurring fifteen times in the game, and the two seem to have a good understanding of how to play together. Indeed, McClean allowing Richardson to break forward resulted in the game's opening chance, as his impressive through ball found Jack Colback, leaving Szczesny to make a strong save.

The news this morning that Richardson is set on leaving Wearside should not be welcomed. Richardson has quickly evolved into a very solid and dependable full-back, one who is both strong in the tackle and can offer another option going forward. As he has done on numerous occassions now, he completely nullified the threat of Theo Walcott - the Arsenal man managed just a single successful cross in the entire game, when he played in Podolski, who found his route to goal blocked by Cuéllar and O'Shea.

It was an afternoon of solid performances from the men in red and white. Seb Larsson apart, everyone performed well, with defensive responsibilities taking priority. Attacking chances were short in coming, though in the first half Sunderland put together some impressive spells of play.

Though they have had little mention here, the performances of the two central defenders must be lauded. Cuéllar and O'Shea were proverbial rocks at the back, displaying an understanding that belied the fact they've only had a solitary pre-season together. Podolski, on his debut, barely had a sniff. 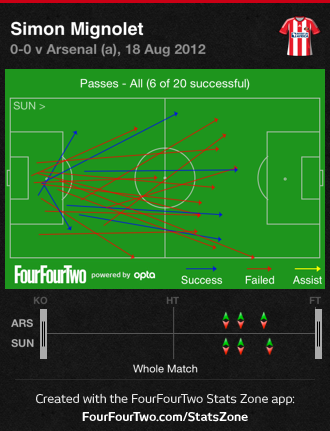 The one major negative from the game was the distribution of Simon Mignolet. Never a strong point of his, the Belgian's passing seems to have improved little over the summer, and was a prime factor in the heavy pressure Sunderland found themselves under in the second half. O'Neill recognised this and brought on Ahmed Elmohamady, whose aerial presence did lessen the impact of Mignolet's poor long kicks, but it remains that Sunderland's keeper must improve this aspect of his game if he is to stand any hope of becoming a top class stopper.

All in all, it was a well deserved point for Sunderland. Arsenal may have dominated the possession and shots count, as they are wont to do in most games, but for all their pressure they produced little in the way of clear cut chances. Olivier Giroud was guilty of a shocking miss ten minutes from the end, but other than that the Gunners looked decidedly low on firepower following the departure of Robin Van Persie.

Martin O'Neill will be most pleased with the point and will now look to strengthen his squad in the next two weeks. Sunderland are well set at the back, but their attacking problems remain. The recruitment of Louis Saha has bolstered them somewhat, but a few new faces are needed if e Black Cats are to compliment their defensive strength with attacking prowess.