Talking Tactics Special: Bruce And O'Neill - How O'Neill Did It

Share All sharing options for: Talking Tactics Special: Bruce And O'Neill - How O'Neill Did It

The revival under Martin O'Neill last season was hugely enjoyable. Seeing the side transformed from lethargic losers to workhorse winners was brilliant. What did grate, however - and I mean REALLY grate - was the fact that no matter where you turned you couldn't help but bump into someone ready to tell you that O'Neill hadn't done much different to Steve Bruce.

I am far from reluctant to give Steve Bruce credit for his work here. Some things he did very well. Tactical organisation and instilling a clear plan into his team was just not one of those. The idea that the extent of Martin O'Neill's changes at Sunderland last season was limited to just being nice to the players and making them smile seemed a hugely unfair reflection on the work of both managers.

So I got my geek on and sifted through masses of seemingly endless, and at times demoralising, match videos to try to get to the bottom of it.

Each graphic has been created from a screen-grab from a game as an example of a typical situation under the respective managers. So with that in mind, lets see exactly how Martin O'Neill turned it around for Sunderland from a tactical point of view.

Defending From The Front 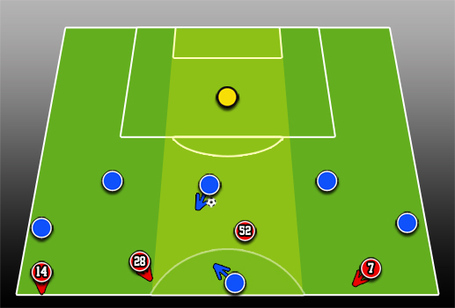 It is oft-said in football that defending starts from the front. But that isn't what this is, really. Chelsea's holding midfielder, Raul Meireles in this case, has dropped back between his centre backs to distribute the ball and finds himself able to so do under no pressure at all. As he strides forward in possession (denoted by blue arrow) Nicklas Bendtner can only watch whilst Colback, Sessegnon, and Larsson are already retreating away from the ball.

As the Sunderland midfield back off into their own half, Frank Lampard shows for a pass and just like Meireles comes under no pressure at all. Obviously the calibre of opposition here is quite hefty, and it is true that maintaining a certain semblance of shape and territorial concessions are required, but it would be fair to say that no effort has been made at all to prevent Chelsea from entering the Sunderland half of the pitch. Unsurprisingly, a matter of seconds later Meireles himself had a shot on Simon Mignolet's goal.

Now, if we compare that to how a similar situation was met under O'Neill... 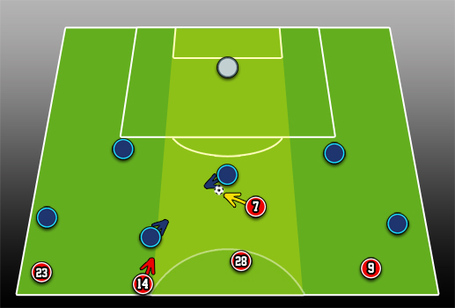 Here we have a similar situation against comparable opposition. This time it is Tomas Rosicky who has dropped back to gather the ball. On this occasion, however, Sebastian Larsson has broken from midfield to put pressure on the ball (denoted by yellow arrow), whilst the striker, Stephane Sessegnon, has dropped back to cover the position in midfield that the Swede has vacated.

Notably, there are no Sunderland players moving away from the ball here. The midfield, although prepared to drop deeper if required, are committed to holding their line and making Arsenal play through them. This is very well depicted by Jack Colback tracking the run of the Arsenal player moving to support Rosicky, which was where the Gunners attack actually broke down in this particular example, resulting in a shot at goal for Sessegnon. 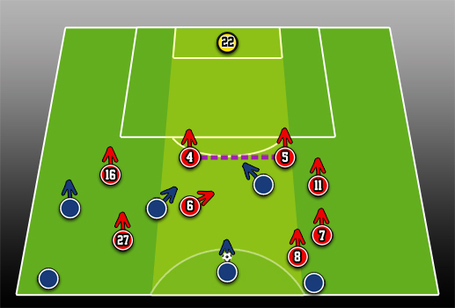 For all the best intentions in the world, the opposition are going to get the ball out of their defence and into midfield at some point. This graphic however, is utterly terrifying. Despite the entire Sunderland midfield and back four being behind the ball there isn't anyone moving to put the man in possession under any kind of pressure at all. In fact, every single Sunderland player is running away from the ball like scolded cats, allowing the WBA midfield player to advance at will.

Further cause for serious worry is the fact you could likely literally drive a bus between the two centre halves. That kind of space, an eager forward, and a midfield player with all the time he wants to pick a pass is a recipe for disaster, and it will come as no surprise to learn that this situation resulted in a WBA shot on goal without there being a single Sunderland challenge to stop it. 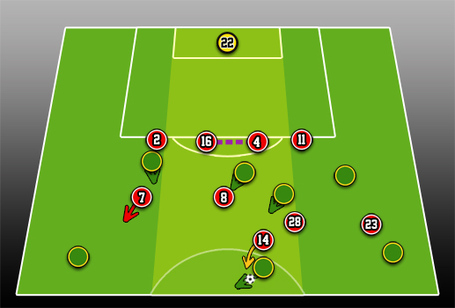 Once again, comparable opposition and situation, but a huge difference from a tactical point of view. Firstly, we are seeing some consistency in the sense that a central midfield player has come out to press the ball with Stephane Sessegnon tucking in to cover his position. As Colback forces the player in possession to turn and move away from the Sunderland goal, Seb Larsson moves out to cut off the easy pass to the left back, resulting in a hopeful long ball being played and running harmlessly through to the goalkeeper.

Crucially, as the player in possession moves away from goal, his teammates ahead of him also start retreating, whilst the Sunderland back four is well protected and able to stand its ground. It is also worth noting that had Larsson or Colback been able to win possession at this point, Norwich would have been caught with 7 players ahead of the ball, which gives a good insight into the counter-attacking prowess the side suddenly found under O'Neill.

Also apparent is how O'Neill's Sunderland sacrificed the flanks when defending their own half. The back four is considerably more narrow, ensuring the space between the centre backs is vastly reduced, and the middle strip (highlighted) is far more densely populated making it all the more difficult to pick a path through.

The most positive difference, however, is that Sunderland are no longer having their positions dictated to them by their opposition like they were in the previous graphic. In this one, Sunderland are controlling their own half.

Defending Your Own Third 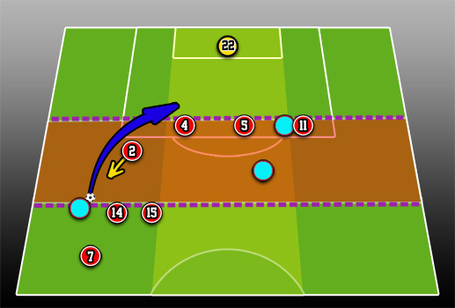 If the WBA example was scary, then this one is a veritable horror show. There is a huge amount of ball-chasing going on here and barely any kind of detectable shape at all. Due to there being just 4 men behind the ball, Phil Bardsley has been forced to come out of the back four and pressure the ball. The gap between defence and midfield is absolutely huge, meaning the defence has been left completely exposed by a midfield that appears to have disintegrated.

The full back can pressure the ball, leaving vacant space behind him, or he can maintain his position and leave himself vulnerable to having to make a challenge in the box. He has probably made the right decision. Nevertheless, by coming out of his defensive position he has opened up a lane for the attacker to play the ball across the face of goal, which is exactly what he did.

The middle strip is, again, worryingly underpopulated. Both central midfield players have allowed themselves to be dragged over towards the ball, meaning that even if a centre back can head away the cross, the Villa attacker can pick up possession in a dangerous area completely unchallenged. It comes as no surprise that the visitors helped themselves to a long range goal in this game. Frankly, the whole thing is a total shambles. 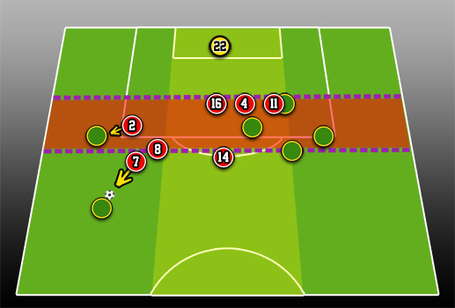 Ah, now this is much better. For starters the midfield have resisted the temptation to chase the ball like a bunch of playground numpties and instead concentrated on getting into a shape that can offer their defence some protection. The defence have dropped deeper, and there is barely any gap at all between them and the midfield in front of them.

Again we are seeing a dual-pressing system just like we have seen in the other O'Neill examples in which one player presses the ball and another presses the recipient of the most likely pass and, again, the result was that possession was effectively surrendered by forcing the player to play a hurried and aimless ball to the back post which was easily dealt with.

Another theme of O'Neill's organization can be clearly seen here too - protecting the centre of the pitch. The left back has tucked right in to effectively make a central three in defence, whilst Jack Colback positions himself centrally outside the area.

James McClean wasn't in the shot, so his position is not on our graphic.

Clearly there are huge and telling differences between the organisation of Sunderland under Steve Bruce and how the side was set up by Martin O'Neill. The general media consensus at the time that O'Neill walked into the Stadium of Light, gave players confidence, and let them get on with it doesn't seem to hold water. There was something considerably more tangible behind it.

Ultimately, for all the man-management and charming Irish brogue, the roots of O'Neill's Sunderland transformation can be found in organisation. O'Neill took a side that seemed to lack any discernible plan of action when not in possession and instilled in them a clear tactical plan for dealing with multiple situations and a collective responsibility for defending.

'Not done that much different'? I strenuously disagree.