Today we caught a glimpse of the brand new Sunderland away strip for the 2012/13 season, and it's our first look at what the new designs from Adidas look like.

Rumours have speculated for what seems like ages since the announcement that Adidas were to make the kits for the foreseeable future, which will also coincide with the announcement of our new shirt sponsor as the team take a completely different look for next season.

Continue reading to see more, and read more about the new kits and sponsors here... 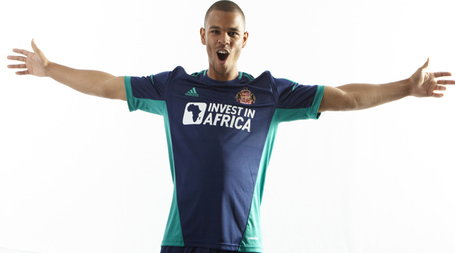 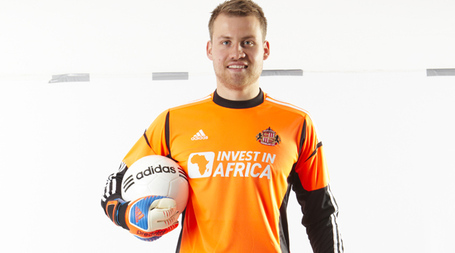 So it looks as though we're going to be sponsored by Invest In Africa, who were heavily linked ever since there was a partnership announced with the charity. The charity themselves are an arm of Tullow Oil, an oil company, who tend to make there money where the bigger players won't go.

Invest In Africa has been set up to try and boost domestic job markets in Africa, develop the skills of local workers and enable the continent to stimulate economic growth. All in all, it seems a very interesting partnership and charity to be involved with. Something very different. On a purely aesthetic level too, the sponsor looks very nice on the shirt.

As for the shirt itself, well from a techy perspective it uses all the latest Adidas technology, including Climacool to obviously not sweat like a beast, and also Formotion. Formotion uses the properties of different substances to increase lower body power and movement. I've absolutely no idea how that works, but let's hope it does.

The shirt itself looks good to me. At first glance I was somewhat unsure about the colour combination, but its a grower. I think we'll come to like this one. The strip Simon Mignolet or Kieren Westwood will be adorning come sin a fetching bright orange, designed one assumes to put off and distract opposition strikers as Chelsea did a couple of seasons ago.

All in all though, it looks quite smart, and leaves us very much looking forward to seeing what the boffins at Adidas have come up with for the home shirt, which is released in July.

Here's what some of the Tweets to @RokerReport (that's us) had to say about the shirt, which have been in the main very positive about the new look... 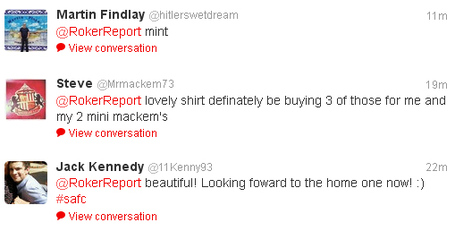 You can pre-order the shirt now from the club's brand new swanky looking official store HERE, as well as all the rest of the pretty awesome looking training and leisurewear, and have it delivered to your door on July 5th, when it goes on sale in stores worldwide.