Sunderland's trip to the Britannia Stadium on Saturday, almost exactly one year since their last visit there, reaped a much more agreeable conclusion for the Wearsiders this time around. Where last year they went down 2-3 in contentious circumstances, this time Martin O'Neill guided his side to a seventh win in ten league games; though this time it was the Black Cats who reaped the benefits of a suspect decision, with James McClean's second half strike enough to secure a 1-0 victory.

Noting the physicality of the hosts, O'Neill saw fit to remove Fraizer Campbell from his starting line-up. Despite an impressive return from injury, Campbell was unlikely to be able meet the demands of two full games in three days, and thus David Meyler was selected in his place.

As a result, Sunderland went out in a 4-5-1 formation - or at least they started the game that way. Meyler sat deeper in the role recently vacated by the injured Lee Cattermole, covering the space behind central midfielders Craig Gardner and Jack Colback. However, with conditions taking their toll and the general style of their opponents being considered, it became clear that this game was not one whereby short central passing was going to prosper. As a result, Meyler pushed forward alongside Colback, with Craig Gardner (who had already been the most advanced of the three) given permission to join in behind Stephane Sessegnon. The Black Cats were in a 4-4-1-1 formation now, but, for some sections of the game, they resembled a more traditional 4-4-2 line-up.

As for their opponents, Tony Pulis' Stoke side employed, as they are wont to do, a far more rigid 4-4-2. Cameron Jerome and Peter Crouch added aerial power up front, hoping to be complemented by wingers Jonathan Walters and Jermaine Pennant. The midfield duo of Greg Whelan and Rory Delap were entrusted with the primary attacking focus of getting the ball wide as quickly as possible. Of course, following Robert Huth's controversial dismissal on the stroke of half-time, Pulis was forced to change his plan. Surprisingly he opted to remove the tricky Pennant, bringing on defender Jonathan Woodgate.

Not One For The Romantics

Make no bones about it, this was a very messy, uninspiring game of football. Due to the snowy, slippery conditions, the game was never going to be a thriller. If there was to be a winner, it was likely to come from either a defensive mistake or a piece of genuine attacking quality. For Sunderland and James McClean, it came in the form of the latter - the young Irishman's surging run and confident finish was the game's sole moment of brilliance.

As the conditions weren't receptive to passing football, the game saw several attempts by each side to attempt individual 'take ons'. Neither side proved particularly adept at them - both teams were successful with just 3 of 10 take on attempts - but there was a notable difference between them nevertheless. 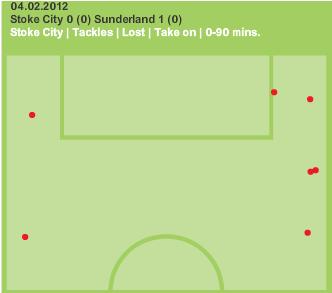 This accurately reflected their aforementioned initial gameplan, but it also underlined the readiness of Sunderland in dealing with their opponents' well-known style of play. Phil Bardsley played very well at right-back, successful in 80% of his challenges, and while Kieran Richardson on the left had a far lower percentage, it is notable that he won each of his challenges in Sunderland's defensive third of the field.

While Stoke adjusted to the Huth sending off, so did Sunderland. Ricardo Fuller, brought on before that incident for Cameron Jerome, soon arose as the home side's main threat. However, with his side a man down, their task was always going to be an uphill one.

Sunderland made subtle change at the back - John O'Shea remained very central, marking the very static Crouch, letting Michael Turner roam further towards the wings to cut off Fuller before he could really build any sort of meaningful attack. 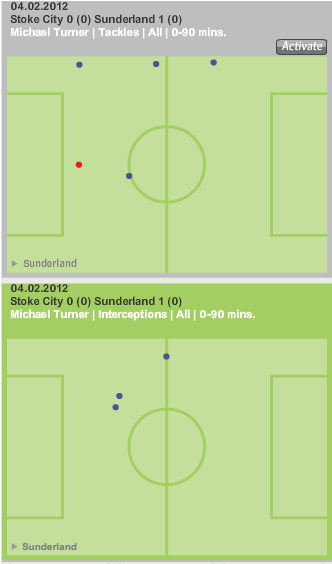 As shown above, Turner was hugely active in the wide areas - with both challenges and interceptions cutting off Stoke attacks. More important still, this activity was hugely successful; 80% success rate in the tackle and 3 interceptions points to an impressive showing from the man many Sunderland fans have previously deemed not good enough for their backline.

Stoke are often given a bad rap, with observers bemoaning their direct, "ugly" style of play. The conditions dictated that yesterday was not going to see a marked removal from this, but this time around it proved unsuccessful for them. This was down to two things - their inabilities when attacking, and Sunderland's ever-increasing defensive prowess.

With regards to the former, Peter Crouch was a particularly poor. His passing chalkboard (below) details how unsuccessful he was with his attempts in the final third. The Sunderland defence, and O'Shea in particular, dealt well with the England striker. Oftentimes they simply allowed the lofty forward to take the ball down before nicking it from him, whereas other times they actually outmuscled him in the air. Of the three Stoke forwards on the field yesterday - Crouch, Jerome and Fuller - it was only the latter who ever looked anything resembling dangerous. 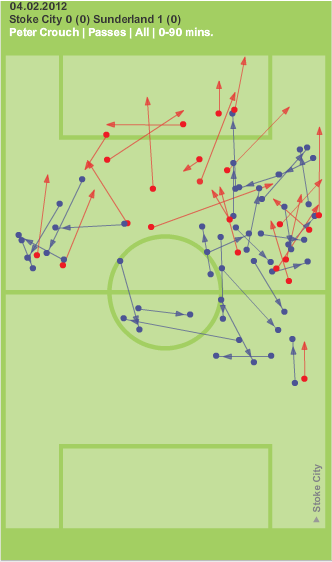 Furthermore, Stoke, perennially preferring an aerial approach, were fairly miserly in this regard yesterday too. 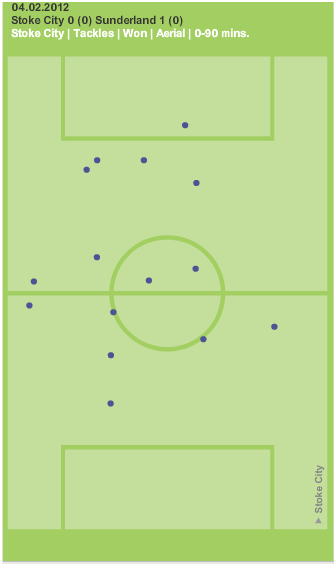 The above chalkboard details their aerial successes on Saturday, and is notable for them winning just a solitary aerial duel in the opposing box. Again the conditions played their part here, but credit must be given to Sunderland for a resolute aerial defensive performance.

Additionally on this matter, we must note the role of Rory Delap. Our tactical review of Sunderland's 4-0 win over Stoke back in September remarked on the waning influence of the ex-Wearsider's much feared long-throw, and it appears that Delap is showing no signs of reviving its influence on games. On Saturday he managed to find a fellow team-mate with just 2 of his 9 attempted long-throws; Simon Mignolet did not experience the torturous treatment Craig Gordon was subjected to a year ago.

A look at the average positions of the players on each side throws up some interesting observations.

Firstly, when analysing the Stoke City graph shown (NB. Number 4 denotes both Robert Huth and Jonathan Woodgate, while 33 - half hidden beneath number 16 - denotes the Cameron Jerome and his replacement Ricardo Fuller), it all appears somewhat muddled up front, and not at all conducive to effective attacking play.

On the left-wing, Jonathan Walters has been forced drastically inside, to the point that he often employed the role of a traditional inside-forward. Phil Bardsley's good work can thus be seen there. Peter Crouch is backed up rather closely by Delap and then Whelan, with the huge gap between them and the centre-backs showing the long-ball nature of Stoke's play.

Meanwhile, the decision to remove Jermaine Pennant looks odd when viewed here - he was an advanced presence during his time on the field. The wide and deeper nature of the aforementioned number 33 is testament to how Fuller foraged deep for the ball, but often found himself cut off by the likes of Michael Turner.

As for the Sunderland graph, there is more of a structure. On the right, Bardsley is a highly advanced full-back, which is complemented by the more reserved nature of Seb Larsson ahead of him. This directly contrasts with the left - where Sunderland focused the bulk of their attacks - where James McClean is very far forward, almost in line with lead striker Sessegnon, and thus Kieran Richardson holds a deeper role in order to ensure the side aren't hugely susceptible to counter-attacks if McClean is caught out up the field.

Turner and O'Shea are noticeably closer together than their opposing centre-backs, something which was key to their resolute performances. Furthermore, the midfield trio is one that had its defensive duties as its primary focus in what each player knew was a tricky game in even trickier condition - Meyler and Colback are deep, with Craig Gardner advanced but not to the point that he can be said to be specifically 'partnering' Sessegnon.

Even taking into account the conditions, which made an entertaining game of football very hard to come by, Sunderland stuck doggedly to their gameplan.

Though the red card decision was one which Pulis and Stoke fans alike have met with dismay, it is hard to see how it really affected the outcome of the game. Sunderland gave away little all game to their hosts, who looked fairly devoid of ideas throughout. The removal of Pennant after the sending off effectively ended the Potters' hopes of creating very much at all - Sunderland pinpointed Fuller as the only remaining individual threat, and negated him accordingly.

To their credit, the Stoke backline gave away little either - but when they did falter, Sunderland were on hand to capitalise in clinical fashion.

All graphics and chalkboards courtesy of whoscored.com and Guardian.co.uk