A third consecutive home game for Sunderland saw Norwich City travel to Wearside, only to be rejected any comfort on their travels and be forced to head home abruptly. A sixth win in nine Martin O’Neill games put Sunderland up to eighth, but what was more impressive was that O’Neill had a plan that not only stifled Norwich, but punished them in due course.

Craig Gardner and Jack Colback in its midfield, whilst Frazier Campbell made his first start since August 2010 up front. Of the two deadline day signings, Wayne Bridge was the only one to feature – albeit from the bench.

As in the draw with Middlesbrough, a Sunderland midfield bereft of Lee Cattermole’s tenacity would need to be tactically astute in order to control the game and this is where Colback deserves all manner of praise. Buoyed by Campbell’s twenty-first minute goal, the Black Cats had supremacy which was able to be maintained by the copper-topped midfielder’s discipline. With Gardner – a more attack-minded central player – alongside him, Colback regimentally kept his shape so that his side could ease itself back into position following counter attacks – had Colback wandered forward then Sunderland may have been susceptible to a counter in its own right.

Upon selecting both Grant Holt and Steve Morison, Norwich made its intentions clear to be direct – perhaps not to the point to rely on long balls – but to ensure that a game between two evenly-matched sides could be tipped in its favour.

However, what was apparent from the early exchanges was that O’Neill would once again utilise his wingers as ‘double’ full-backs in defensive stages. With the aid of a team-mate, Sunderland’s full-backs were able to hunt the ball, and Kieran Richardson was excellent in this department; winning five out seven tackles and making three interceptions.

With Norwich’s wingers being outnumbered, it was forced to find alternatives but the most telling one arrived far too late. Paul Lambert introduced Anthony Pilkington just after the hour – at which point his side were 3-0 down – and within a minute of coming on he was able to pick out Morison from a good attacking area. His header drifted wide, but apart from Holt’s early chance which Simon Mignolet thwarted, it was about as good as it got for the visitors.

In addition to Sunderland’s defensive wing play, it allowed Norwich possession in the defensive third whilst remaining a compact unit; further forcing the visitors to cross from deep as there were no opportunities to work the ball wide. A notable ploy in this tactic also came through the interchanging of the focal point. When Sunderland was in a position to press the ball, Stephane Sessegnon and Campbell shared the responsibility of being the main presser – perhaps to preserve the returning striker’s fitness levels – as opposed to the task being primarily Campbell’s job (which had previously been the case for Nicklas Bendtner) and that upset Norwich’s rhythm when building attacks from deep (Sunderland intercepted a total eight times in the opposition half alone). 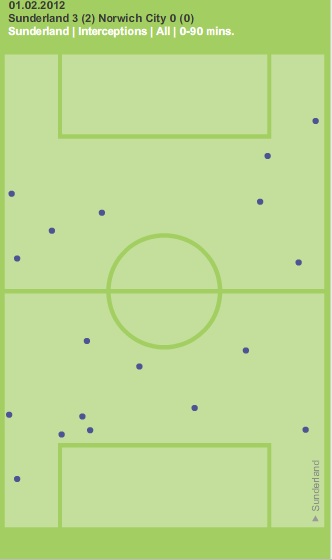 This Number 9’s A Bit Different

With a change up front inevitable due to Bendtner’s injury and Connor Wickham’s knock against Middlesbrough, selecting Campbell brought about a different option for Sunderland in attack.

Campbell looked to stretch the space between Norwich’s midfield and defence by making runs beyond the last defender. Whilst this is commonly a way in which to score goals it proved hugely beneficial in assisting Sunderland’s second as Campbell, on his toes ready to make a penetrative run, held Norwich’s back line in place enabling Sessegnon the time and space to turn. His nutmeg and releasing of Campbell then sent Norwich’s defence backpedalling but also key to the goal was the movement of Gardner – who had fixed the attentions of Daniel Ayala – allowing Sessegnon to speed away from covering defenders to head home.

For the second league game running, O’Neill’s intentions were to release his dangerous counter attacking side which may have found a new dimension with Campbell as a focal point. Noting the average positions of Sunderland's XI, it is clear to see not only how dominant they were but how often they were able to deploy the counter attacking strategy. 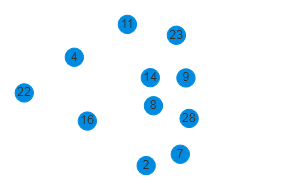 Again, Sunderland allowed its opponent large spells of possession in their own half, but with Norwich unable to retain the ball as well as Swansea City, it often lured the visitors into the trap, with the pacy McClean, Campbell and Sessegnon lying in wait. 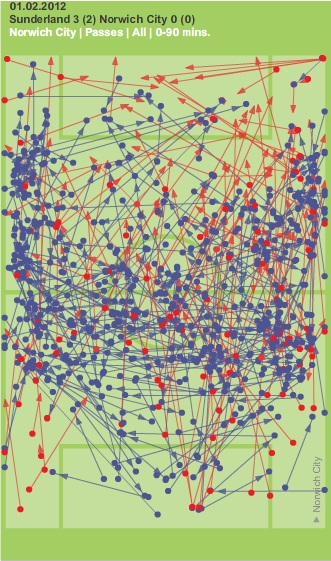 Chalkboards and statistics courtesy of whoscored.com and guardian.co.uk